The Amazon SES team is excited to announce the release of sending authorization! This feature allows users to grant permission to use their email addresses or domains to other accounts or IAM users.

Note that for simplicity, we’ll be referring to email addresses and domains collectively as “identities” and the accounts and IAM users receiving permissions as “delegate senders.”

Why should I use sending authorization?

The primary incentive to use sending authorization is to enable cross-account identity usage with fine-grained permission control. Let’s look at two example use cases.

Say you’ve just been hired to create and manage an email marketing campaign for an online retailer. Until now, in order to send the retailer’s marketing emails under their domain name, you would have had to convince them to allow you to verify their domain under your own AWS account—this would let you send emails using any address under their domain, at any time, and for any purpose, which the retailer might not be comfortable with. You’d also have to work out who would get the bounce/complaint/delivery notifications, which might be additionally confusing because the notifications from your marketing emails would be sent to the same place as the notifications from the transactional emails the retailer is handling.

With sending authorization, however, you can use the retailer’s identity and receive delivery, bounce and complaint notifications while letting them retain sole ownership of it. Identity owners will still be able to monitor usage with delivery, bounce, and complaint notifications and can adjust permissions at any time, and use AWS condition keys to finely control the scope of those permissions.

Imagine instead that you own or administrate for a company that has several disparate teams that all wish to use SES to send emails using a common email address. Until now, you would have had to create and maintain IAM users for each of these teams under the same account (in which case they still would have access to each other’s identities) or verify the same identity under multiple different accounts.

How does sending authorization work?

Identity owners grant permissions by creating authorization policies. Let’s look at an example. The policy below gives account 9999-9999-9999 permission to use the ses-example.com domain owned by 8888-8888-8888 in SendEmail and SendRawEmail requests as long as the “From” address is marketing@ses-example.com (with any address tags). 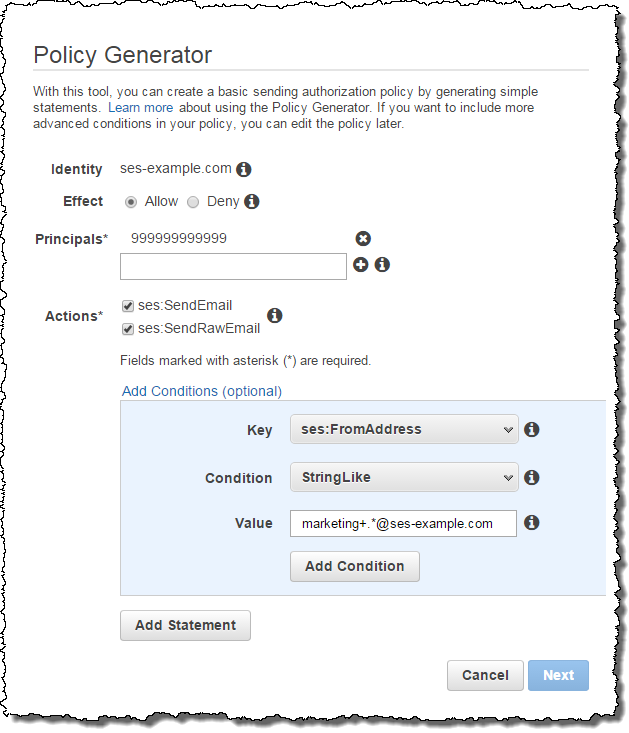 Identity owners can add or create a policy for an identity using the PutIdentityPolicy API or the SES console, and can have up to 20 different policies for each identity. You can read more about how to construct and use policies in our developer guide.

How do I make a call with someone else’s identity that I have permission to use?

You’ll specify to SES that you’re using someone else’s identity by presenting an ARN when you make a request. The ARN below refers to an example domain identity (ses-example.com) owned by account 9999-9999-9999 in the US West (Oregon) AWS region.

Depending on how you make your call, you may need to provide up to three different ARNs: a “source” identity ARN, a “from” identity ARN, and a “return-path” identity ARN. The SendEmail and SendRawEmail APIs have new optional parameters for this purpose, but users of our SMTP endpoint or our SendRawEmail API have the option to instead provide the ARNs as X-headers (X-SES-Source-ARN, X-SES-From-ARN, and X-SES-Return-Path-ARN). See our SendEmail and SendRawEmail documentation for more information about these identities). These headers will be removed by SES before your email is sent.

What happens to notifications when email is sent by a delegate?

Both the identity owner and the delegate sender can set their own bounce, complaint, and delivery notification preferences. SES respects both sets of preferences independently. As a delegate sender, you can configure your notification settings almost as you would if you were the identity owner. The two key differences are that you use ARNs in place of identities, and cannot configure feedback forwarding (a.k.a. receiving bounces and complaints via email) in the console or the API. But, this doesn’t mean that delegate senders cannot use feedback forwarding. If you are a delegate sender and you do want bounces and complaints to be forwarded to an email address you own, just set the “return-path” address of your emails to an identity that you own. You can read more about it in our developer guide.

These can be used to control when policies apply. For example, you might use the “ses:FromAddress” condition key to write an IAM policy that only permits an IAM user to call SES using a certain “From” address. For more information about how to use our new condition keys, see our developer guide.

We hope you find this feature useful! If you have any questions or comments, let us know in the SES Forum or here in the comment section of the blog.