How to check your domain verification settings

Finding the Name Servers for the Domain

Each domain is served by one or more name servers, which map the domain name to the IP address of the host computer. To find the name servers that serve our domain, we are going to use the nslookup tool, which you run from a command line. You can use nslookup on both Windows and Linux. The commands in this post were executed on Windows 7. To get to the command line on Windows 7, for example, click Start and then type cmd.  On Linux-based operating systems, open a terminal window. The output of nslookup might be a little bit different on your system.

Note that for troubleshooting purposes, it is best to query the DNS servers that are serving your domain because they contain the most up-to-date information. Sometimes, even if the DNS records look fine in your DNS server, it might still take time for that information to propagate to the SES DNS servers. 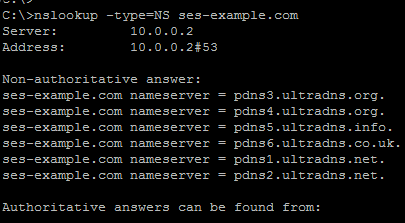 The next step is to check that the verification token is published properly. We are looking for a TXT record under _amazonses.ses-example.com.  Note that the underscore before amazonses is optional. See the Developer Guide for more information.

At the command prompt, type nslookup -type=TXT  _amazonses.ses-example.com pdns2.ultradns.net, as shown in the screenshot below.

From the output of the command, you can see that the value published under _amazonses.ses-example.com is our token, fmxqxT/icOYx4aA/bEUrDPMeax9/s3frblS+niixmqk=, which means that the TXT record is published correctly.

On Linux you can also use the dig command. To use dig, in a terminal window, type dig NS ses-example.com +short to list all of the name servers for your domain.

Now, let’s see what the output looks like for the most common mistakes.

Always make sure that the published verification token is exactly the same as the one listed in the SES console.

Example nslookup output of these mistakes is below.

I hope that you found this blog post helpful. Please feel free to browse or post on the SES forum if you have questions about domain verification.