Deploying a Static Website with AWS Amplify and CDK

This post was written by Ozioma Uzoegwu, Solution Architect at AWS.

In this blog post, we will build a sample React application that will be hosted on AWS Amplify. This can be done directly using the Amplify Console, however we will be using AWS Cloud Development Kit (AWS CDK) to show how to develop the infrastructure and the configurations required to host the application on Amplify.

Overview of the AWS Amplify and AWS CDK

AWS Amplify provides developers with a set of tools and services to build secure and scalable full stack cloud applications. One of the tools is the AWS Amplify Console that provides a GUI with a git-based workflow for hosting static sites as well as full stack serverless web applications. Applications can be deployed by connecting to an existing repository (GitHub, BitBucket Cloud, GitLab and AWS CodeCommit) to set up a fully managed continuous deployment pipeline. Subsequently, any changes committed to the repository will trigger the pipeline to build, test and deploy the changes to the target environment. It also provides instant content delivery network (CDN) cache invalidation, atomic deploys, password protection, and redirects without the need to manage any servers.

AWS CDK is an open source software development framework which can be used to model and provision your cloud application resources using familiar programming languages, including TypeScript, JavaScript, Python, C# and Java. For the example in this blog, we will be using Typescript.

The figure below shows the AWS services and the steps involved in deploying the sample React application using Amplify and CDK. 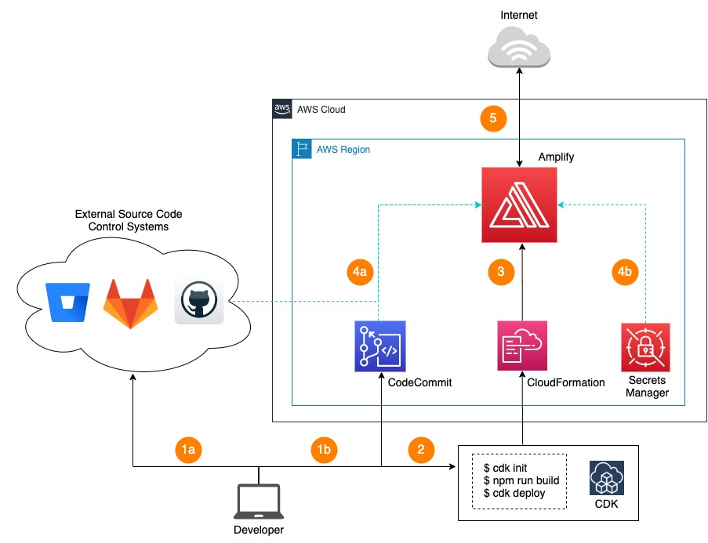 To deploy the sample application with CDK, the following will need to be setup:

The AWS CDK Toolkit, the CLI command cdk, is the primary tool for interacting with your AWS CDK app. It will be used to deploy the CDK code to the target AWS environment. To install, use the command below.

The below command will create a new project folder (amplify-react-sample) which will contain the React app and the CDK app. It will also create a sample React application which is launched in localhost as shown in the figure below. 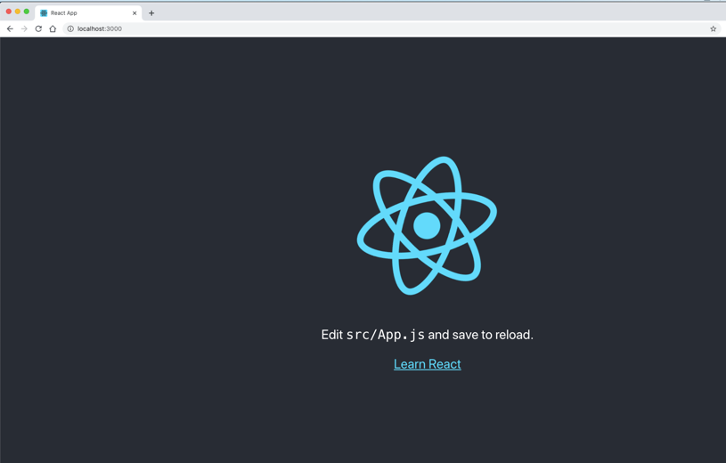 Building the infrastructure with AWS CDK

To install the CDK modules required to build the application, run the following commands

To build the application and deploy the resources to AWS cloud, run the following commands:

Creation of the Amplify Application

CDK provides a construct App to define and configure an Amplify application. The sample code below shows an example of an Amplify Application created from a source code in CodeCommit. The build specification to define the actions to be performed during the automated Amplify build stage can be defined by adding “amplify.yml” to the repository (~/amplify-sample-app/amplify.yml). A sample content of the file as used in this example is shown below.

Amplify application can also be created from a code base in GitHub repository. CDK provides a class GitHubSourceCodeProvider within the @aws-cdk/aws-amplify package which enables an amplify application to be created by specifying the repository owner, name and a personal access token. The token will need to be granted the “repo” scope to give amplify the necessary permission to access the repository. For example, amplify will create a webhook in the GitHub repository which will be triggered when one or more commits are pushed to a repository branch or tag. In the code example below, the token generated is stored encrypted as a key-value pair in AWS Secrets Manager and will be retrieved at runtime to access the GitHub repository.

Rebuild and deploy the cdk application to create the Amplify application with the instruction below.

When you view your live domain, you should now see these updates reflected. 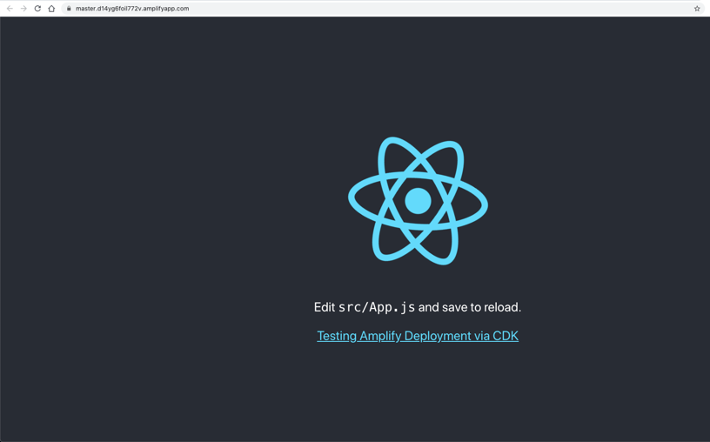 Similar implementations are provided for GitLab which can be configured using the Amplify class GitLabSourceCodeProvider. Other features of an amplify App that can be configured via CDK include adding customer rules for redirection; adding a domain and mapping sub domains to branches; adding environment variable. For more details on how to leverage these features refer to the amplify App construct.

Deploying infrastructure with AWS CDK enables the automated testing of the infrastructure code as part of the development process. AWS provides a Testing Construct for CDK applications written in Typescript language with the intention to support other languages sometime in the future. Amplify provides the ability to integrate a frontend application with backend functionality using Amplify Javascript Libraries, for example adding a REST or GraphQL API, Authentication and many other services. To add a backend to your application, follow the guide here.

To clean up the sample project, run the command cdk destroy to delete the cloud resources.

In this blog post, we have covered the steps to get started in deploying an Amplify Application using AWS CDK which can be extended to build a full stack application using Amplify CLI and Amplify Libraries. AWS Amplify and AWS CDK are both open source project and we will welcome any feedback or feature request which can be raised in the Amplify Github repository and  CDK Github repository respectively. To learn more about the Amplify and CDK, you can read the Amplify documentation and the CDK documentation.