Configuration drift occurs when a system “drifts” or changes from its intended configuration. It is caused by having inconsistent configuration items (CIs) across environments.

Systems Manager provides a management approach that is designed for the scale and agility of the cloud but extends into your on-premises data center. Systems Manager makes it easier for you to seamlessly bridge your existing infrastructure with AWS.

Configuration drift can happen for a multitude of reasons and can occur in many types of environments such as database systems, network configurations, directory services, web servers, and custom APIs. Some possible reasons that drift can occur include system updates, code pushes, hardware upgrades, or software updates that get applied to some, but not all of your intended systems. I am sure that you have seen this firsthand.  We have all heard “but it worked in my dev environment.”

Configuration drift can cause problems that can result in unintended system behaviors, system failures, disaster recovery issues, and many other potential problems. Fortunately, there are tools and technologies that help mitigate drift.

Declaratively define a desired state within a configuration file that can be applied to a system to interpret and apply.

An EC2 tool that helps you apply a configuration to a set of on-premises servers and EC2 instances on a scheduled basis.

CMDBs help track the state of IT assets (also known as configuration items), allowing IT administrators the ability to check on the current state of CIs at any time. A common issue with CMDBs is stale data, meaning that the current state is not always up-to-date. The inability to reliably detect drift is problematic as mitigation is not performed. While CMDBs are popular, I do not use them as a solution in this post.

Configuration as code via PowerShell DSC

Before I dive into a solution to help with the ongoing struggles of configuration drift, here are the benefits of using configuration as code via PowerShell DSC:

A system “desired state” is defined in declaratively based configuration files. You no longer need to develop custom code and scripts to handle the configuration state that you want for your servers.

You can apply the configuration file repeatedly without adverse side effects.

The configuration files are human-readable and easily understood.

State Manager allows you to schedule a script to be run against your on-premises servers and EC2 instances on a scheduled basis. If the scripts are idempotent, you can apply them repeatedly. This gives way to a simple and scalable pattern that helps mitigate configuration drift.

This is a powerful combination! State Manager and PowerShell DSC allow you to define configuration policies that can be applied to your EC2 instances at scale. It ensures that your instances remain in that state by reapplying the policy on a defined schedule. While this does not prevent drift from occurring, it helps you mitigate any drift that may have occurred. Thus, this is an excellent pattern to ensure that both your on-premises servers and EC2 instances stay in your desired state. 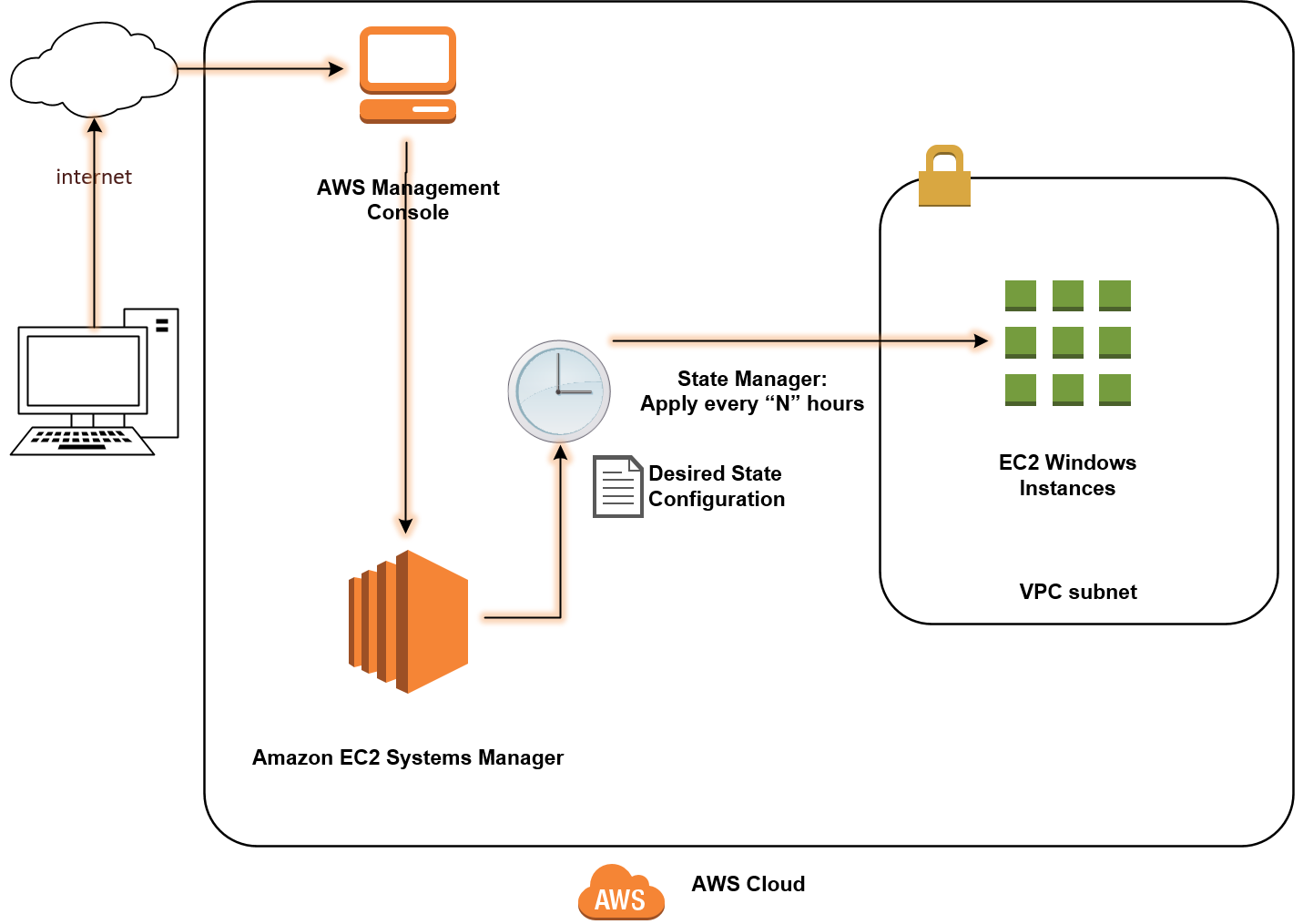 In this section, I show you how to use State Manager from the AWS Management Console. You learn to use both State Manager and PowerShell DSC to combat configuration drift.

At a high level, this is the walk-through process:

Shaun Breen is a Systems Development Engineer on the Amazon EC2 Windows team. The EC2 Windows team is responsible for producing Windows Server AMIs and Systems Manager documents. Shaun enjoys developing solutions that make EC2 the best place to run Microsoft Windows Server in the cloud. When not working on EC2 Windows solutions, he enjoys attending sporting events, coaching ice hockey, and spending time with his wife and three children.