PyCon has been the Python community’s conference since 2003. Each year, PyCon is held in multiple regions across the world. This year’s largest PyCon was held in Cleveland, Ohio, and AWS is proud to have joined in as a diamond sponsor. The conference had five concurrent tracks with talks, tutorials, lightning talks, and developer sprints during the week of May 9-17. There were also several community-focused events including a job fair, an expo, a PyLadies lunch and charity auction, a Python language summit, and an education summit.

In addition to our sponsorship, pythonistas from several Amazon teams participated at the conference in Cleveland. We presented technical talks and workshops, and added buzz with our booth at the expo.

James Saryerwinnie, a senior software engineer and Python expert at AWS, led a workshop on building serverless applications with AWS Chalice. AWS Chalice is a popular open source library downloadable from PyPi that enables a developer to create and maintain application backends with a variety of AWS resources such as Lambda, CloudWatch, CloudFormation. An earlier webinar version of James’ workshop can be found here. 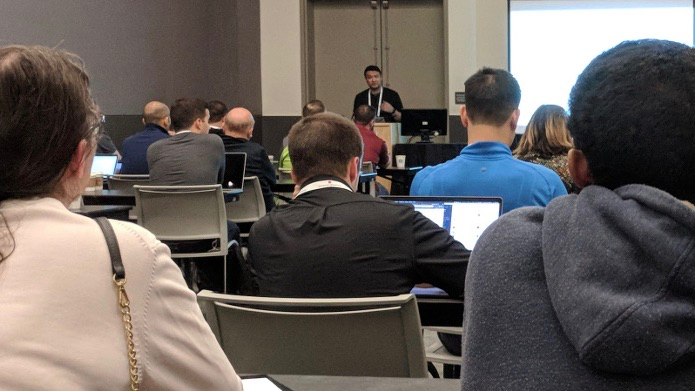 Netflix, an AWS top customer, talked about its ability to manage user failover on AWS. You can see the Netflix presentation here.

At PyCon, thousands of smart and enthusiastic technologists came together to learn, teach, and to just have fun. The energy and community spirit was palpable. At AWS, we were privileged to share in this enthusiasm and open source spirit. Looking forward to PyCon 2019!