As an engineer, understanding the performance and health of your applications and services is crucial. However, this can be challenging, especially when monitoring across various languages, infrastructures, and services. OpenTelemetry, a Cloud Native Computing Foundation (CNCF) open source project, has created an open standard specification that “makes robust, portable telemetry a built-in feature of cloud-native software.” OpenTelemetry provides a single set of APIs, libraries, agents, and collector services to capture distributed traces and metrics from your application. You can analyze them using Prometheus, Jaeger, and other observability tools.

The project is targeting General Availability (GA) before the end of 2020. Open source contributors from all over the world are rapidly adding functionality to OpenTelemetry. Each OpenTelemetry component, including SDKs, exporters, and instrumentation libraries, is important in connecting observability data across services, applications, and observability backends.

There was an opportunity to simplify the export process for users by reducing component complexity. Our exporter acts on this opportunity by removing the Prometheus and/or OpenTelemetry Collector components and exports data from the Go SDK directly to Cortex. It aims to be the simplest way for users to export metrics data from a Go application to Cortex. In building this project, we hoped to both improve developer efficiency and lower operational costs.

When we began our project, there was only a draft specification for Metrics Exporters. Community feedback from contributors and users drives rapid evolution, which meant we could jump in and push the specification forward. Discussion around OpenTelemetry takes place in Gitter channels, on OpenTelemetry GitHub repos through issues and pull requests, and weekly special interest group meetings.

We used a comprehensive development workflow, starting with a requirements analysis to identify features we needed to support. We followed up on the requirements analysis with a design in which we mapped out the components and general structure of the exporter. After that, we completed implementation and testing docs that outlined how we would turn our design into code. Along the way, we received guidance and reviews from both AWS employees and OpenTelemetry maintainers.

To meet the needs of OpenTelemetry users, we set the following project goals: 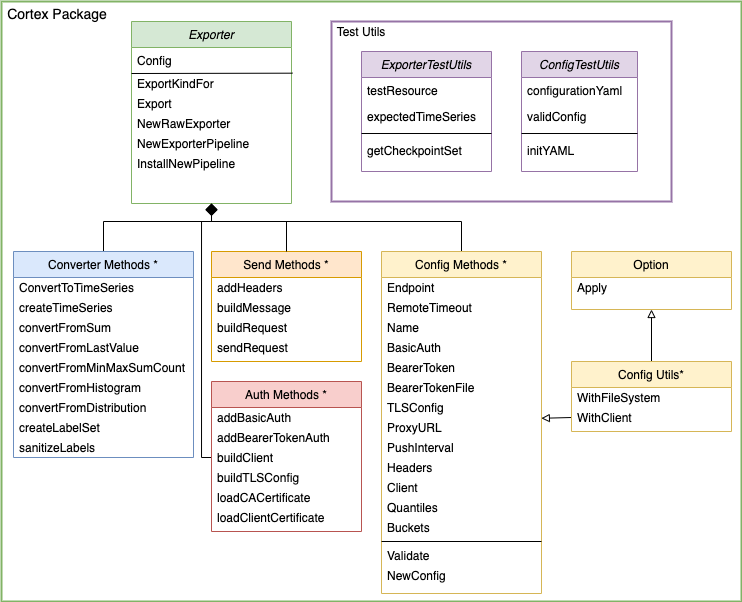 Within the Exporter, the check-pointed data iterates and converts to TimeSeries based on the data’s aggregation type. The OpenTelmetry-Go SDK provides multiple aggregation types that reflect different types of data, where each type of data becomes an individual TimeSeries. For example, a MinMaxSumCount aggregation is converted to four TimeSeries—Min, Max, Sum, and Count. As stated by their names, the four TimeSeries contain the minimum, maximum, sum, and count of the values recorded to an instrument. Other aggregation types include Sum, Histogram, Distribution, and LastValue.

These TimeSeries group together in an array, and convert to a WriteRequest, a struct defined by Prometheus for use in its remote_write API. Snappy compresses this WriteRequest into a Protocol Buffer message, attaches it to an HTTP request, and sends it to Cortex. The Exporter can be configured to handle various use cases such as different endpoints, custom push intervals, HTTP authentication, and more.

We followed test-driven development best practices while implementing the Exporter. We designed and wrote the tests before implementing the necessary code to pass said tests. Individual components were tested with unit tests, and we used integration tests to verify that the different components worked together as expected.

For our tests, we used Go’s built-in testing library in addition to the libraries testify and go-cmp.

The Cortex Exporter requires an instrumented Go application that is using our Exporter and a running instance of Cortex. End users can set up the Exporter in their application, create instruments, and collect metrics as shown in the following image. 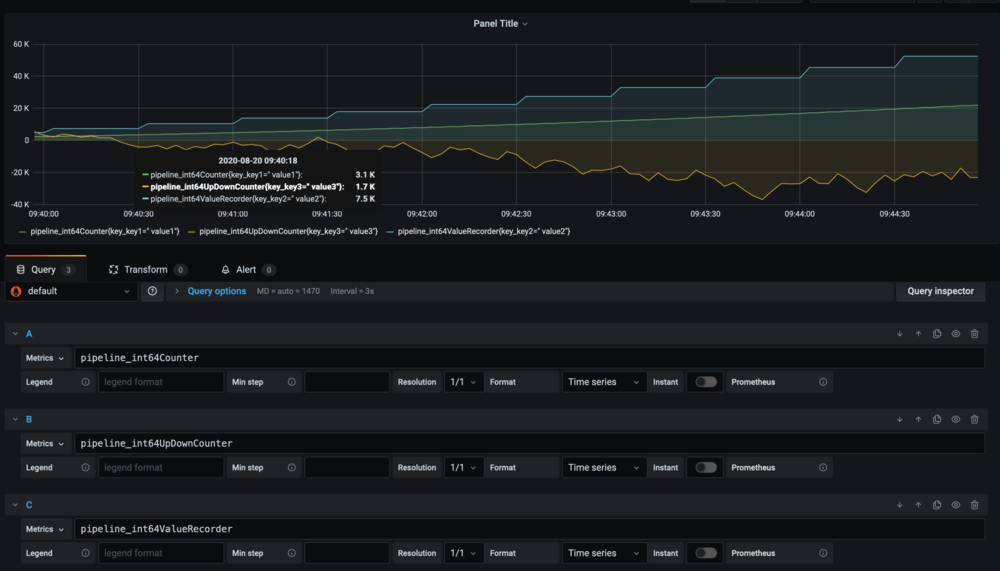 While working on the design and implementation of this project, we learned about the process of building, documenting, and testing high-quality code. We also learned how to work with a large community of open source contributors. We embraced open source principles by fostering transparency and discussion. We also contributed documentation, examples, and tests, which are all fundamental for successful open source development.

Working with the OpenTelemetry community has been an amazing experience. We’d like to extend the invitation to join us to each of you. You can learn more about OpenTelemetry at the links below. Join the discussion, test new features, and contribute your ideas and experience. We hope to see you there! 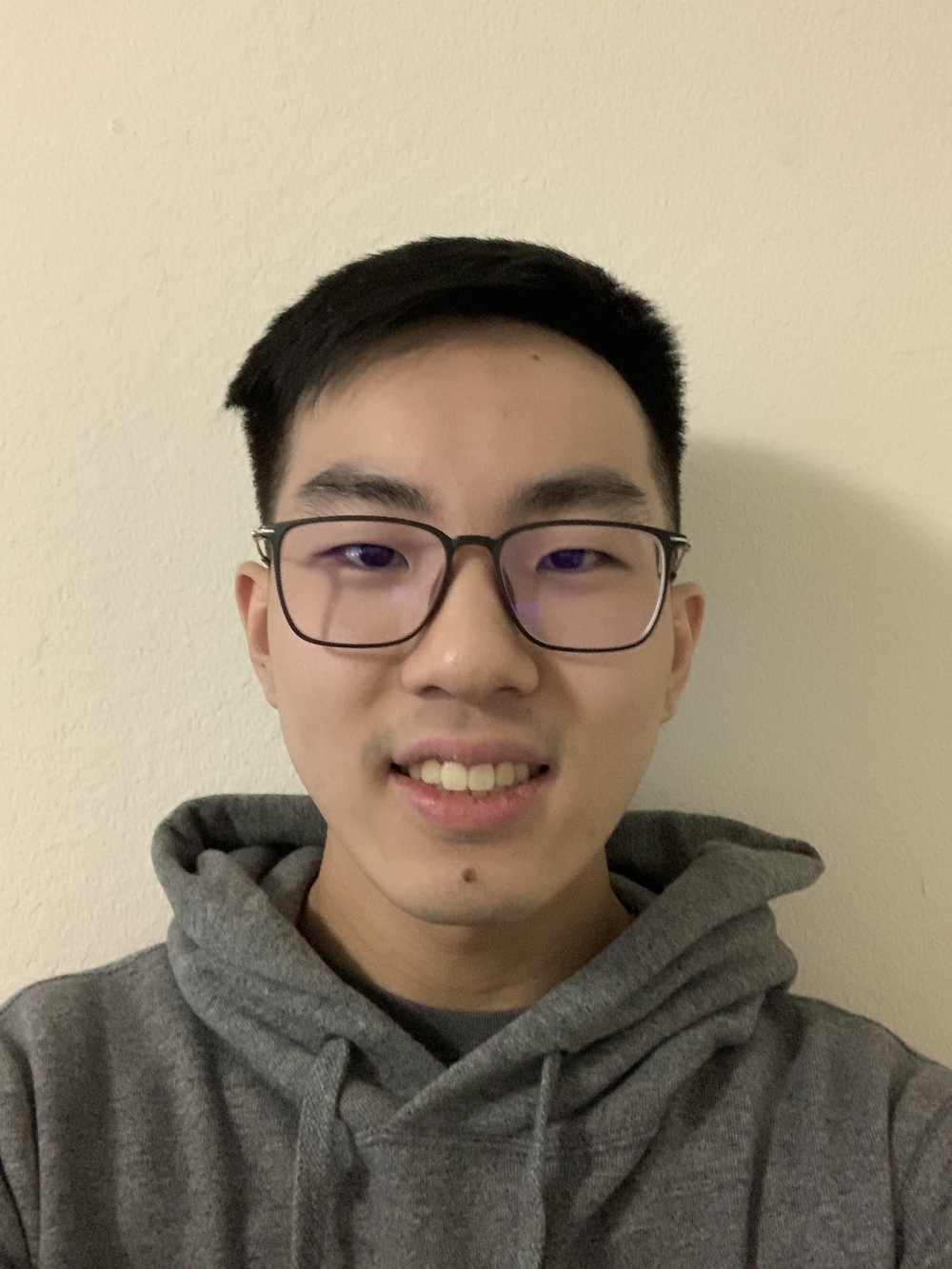 Eric Lee is a rising senior majoring in computer science at UC Davis and current software engineering intern at AWS. He is interested in machine learning and cloud computing. 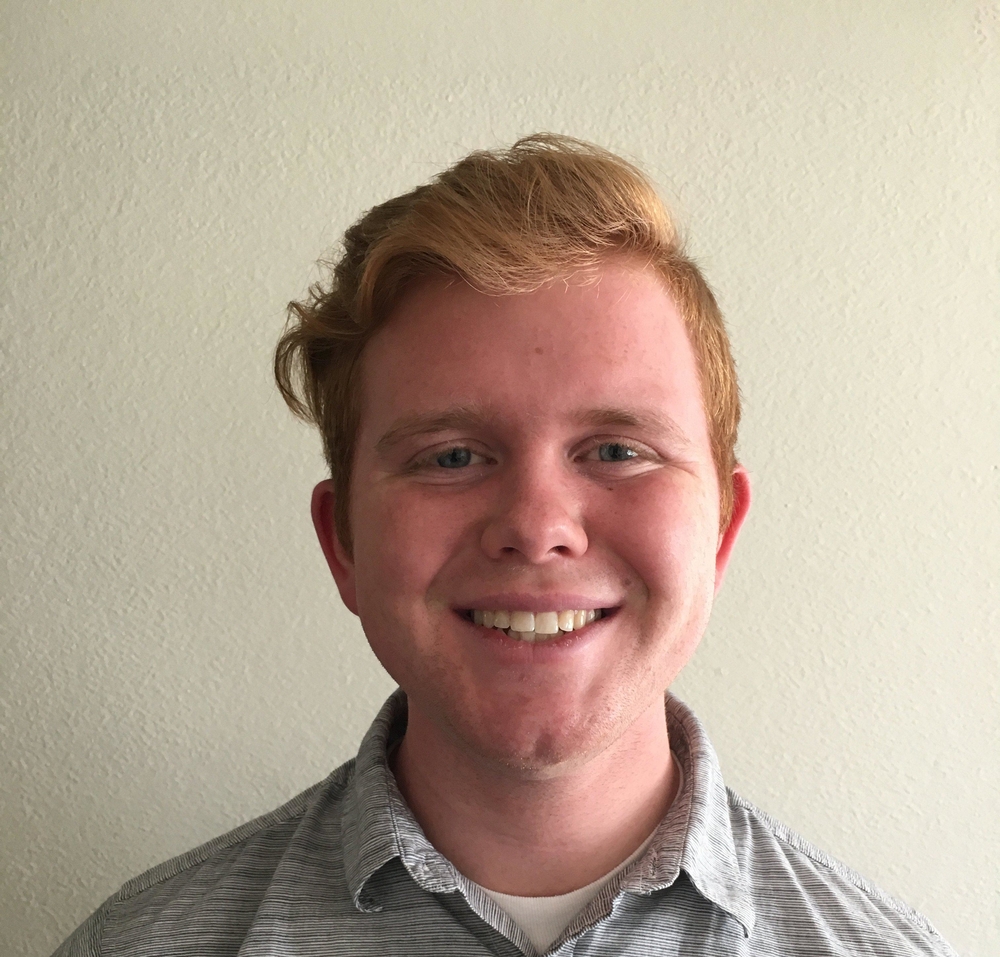 Connor Lindsey is a senior at Brigham Young University currently interning as a software developer at AWS. He is interested in React, React Native, and UI/UX design.