Today we are happy to announce a new open source project, Finch. Finch is a new command line client for building, running, and publishing Linux containers. It provides for simple installation of a native macOS client, along with a curated set of de facto standard open source components including Lima, nerdctl, containerd, and BuildKit. With Finch, you can create and run containers locally, and build and publish Open Container Initiative (OCI) container images.

At launch, Finch is a new project in its early days with basic functionality, initially only supporting macOS (on all Mac CPU architectures). Rather than iterating in private and releasing a finished project, we feel open source is most successful when diverse voices come to the party. We have plans for features and innovations, but opening the project this early will lead to a more robust and useful solution for all. We are happy to address issues, and are ready to accept pull requests. We’re also hopeful that with our adoption of these open source components from which Finch is composed, we’ll increase focus and attention on these components, and add more hands to the important work of open source maintenance and stewardship. In particular, Justin Cormack, CTO of Docker shared that “we’re bullish about Finch’s adoption of containerd and BuildKit, and we look forward to AWS working with us on upstream contributions.”

We are excited to build Finch in the open with interested collaborators. We want to expand Finch from its current basic starting point to cover Windows and Linux platforms and additional functionality that we’ve put on our roadmap, but would love your ideas as well. Please open issues or file pull requests and start discussing your ideas with us in the Finch Slack channel. Finch is licensed under the Apache 2.0 license and anyone can freely use it.

For building and running Linux containers on non-Linux hosts, there are existing commercial products as well as an array of purpose-built open source projects. While companies may be able to assemble a simple command line tool from existing open source components, most organizations want their developers to focus on building their applications, not on building tools.

At AWS, we began looking at the available open source components for container tooling and were immediately impressed with the progress of Lima, recently included in the Cloud Native Computing Foundation (CNCF) as a sandbox project. The goal of Lima is to promote containerd and nerdctl to Mac users, and this aligns very well with our existing investment in both using and contributing to the CNCF graduated project, containerd. Rather than introducing another tool and fragmenting open source efforts, the team decided to integrate with Lima and is making contributions to the project. Akihiro Suda, creator of nerdctl and Lima and a longtime maintainer of containerd, BuildKit, and runc, added “I’m excited to see AWS contributing to nerdctl and Lima and very happy to see the community growing around these projects. I look forward to collaborating with AWS contributors to improve Lima and nerdctl alongside Finch.”

Finch is our response to the complexity of curating and assembling an open source container development tool for macOS initially, followed by Windows and Linux in the future. We are curating the components, depending directly on Lima and nerdctl, and packaging them together with their dependencies into a simple installer for macOS. Finch, via its macOS-native client, acts as a passthrough to nerdctl which is running in a Lima-managed virtual machine. All of the moving parts are abstracted away behind the simple and easy-to-use Finch client. Finch manages and installs all required open source components and their dependencies, removing any need for you to manage dependency updates and fixes.

The core Finch client will always be a curated distribution composed entirely of open source, vendor-neutral projects. We also want Finch to be customizable for downstream consumers to create their own extensions and value-added features for specific use cases. We know that AWS customers will want extensions that make it easier for local containers to integrate with AWS cloud services. However, these will be opt-in extensions that don’t impact or fragment the open source core or upstream dependencies that Finch depends on. Extensions will be maintained as separate projects with their own release cycles. We feel this model strikes a perfect balance for providing specific features while still collaborating in the open with Finch and its upstream dependencies. Since the project is open source, Finch provides a great starting point for anyone looking to build their own custom-purpose container client.

In summary, with Finch we’ve curated a common stack of open source components that are built and tested to work together, and married it with a simple, native tool. Finch is a project with a lot of collective container knowledge behind it. Our goal is to provide a minimal and simple build/run/push/pull experience, focused on the core workflow commands. As the project evolves, we will be working on making the virtualization component more transparent for developers with a smaller footprint and faster boot times, as well as pursuing an extensibility framework so you can customize Finch however you’d like.

Over time, we hope that Finch will become a proving ground for new ideas as well as a way to support our existing customers who asked us for an open source container development tool. While an AWS account is not required to use Finch, if you’re an AWS customer we will support you under your current AWS Support plans when using Finch along with AWS services.

What can you do with Finch?

Since Finch is integrated directly with nerdctl, all of the typical commands and options that you’ve become fluent with will work the same as if you were running natively on Linux. You can pull images from registries, run containers locally, and build images using your existing Dockerfiles. Finch also enables you to build and run images for either amd64 or arm64 architectures using emulation, which means you can build images for either (or both) architectures from your M1 Apple Silicon or Intel-based Mac. With the initial launch, support for volumes and networks is in place, and Compose is supported to run and test multiple container applications.

Once you have installed Finch from the project repository, you can get started building and running containers. As mentioned previously, for our initial launch only macOS is supported.

To install Finch on macOS download the latest release package. Opening the package file will walk you through the standard experience of a macOS application installation.

Finch has no GUI at this time and offers a simple command line client without additional integrations for cluster management or other container orchestration tools. Over time, we are interested in adding extensibility to Finch with optional features that you can choose to enable.

After install, you must initialize and start Finch’s virtual environment. Run the following command to start the VM:
finch vm init

To verify that we are running our commands on an Apple Silicon-based Mac, we can run uname and see the architecture listed as arm64:

Let’s create and run an amd64 container using the --platform option to specify the non-native architecture:

The --platform option can be used for builds as well. Let’s create a simple Dockerfile with two lines:

By default, Finch would build for the host’s CPU architecture platform, which we showed is arm64 above. Instead, let’s build and push an amd64 container to ECR. To build an amd64 image we add the --platform flag to our command:

At this point we’ve created an image on an Apple Silicon-based Mac which can be used on any Intel/AMD CPU architecture Linux host with an OCI-compliant container runtime. This could be an Intel or AMD CPU EC2 instance, an on-premises Intel NUC, or, as we show next, an Intel CPU-based Mac. To show this capability, we’ll run our newly created image on an Intel-based Mac where we have Finch already installed. Note that we have run uname here to show the architecture of this Mac is x86_64, which is analogous to what the Go programming language references 64-bit Intel/AMD CPUs as: amd64.

Another use case is multi-container application testing. Let’s use yelb as an example app that we want to run locally. What is yelb? It’s a simple web application with a cache, database, app server, and UI. These are all run as containers on a network that we’ll create. We will run yelb locally to demonstrate Finch’s compose features for microservices:

The output indicates a network was created, many images were pulled, started, and are now all running in our local test environment.

In this test case, we’re using Yelb to figure out where a small team should grab lunch. We share the URL with our team, folks vote, and we see the output via the UI: 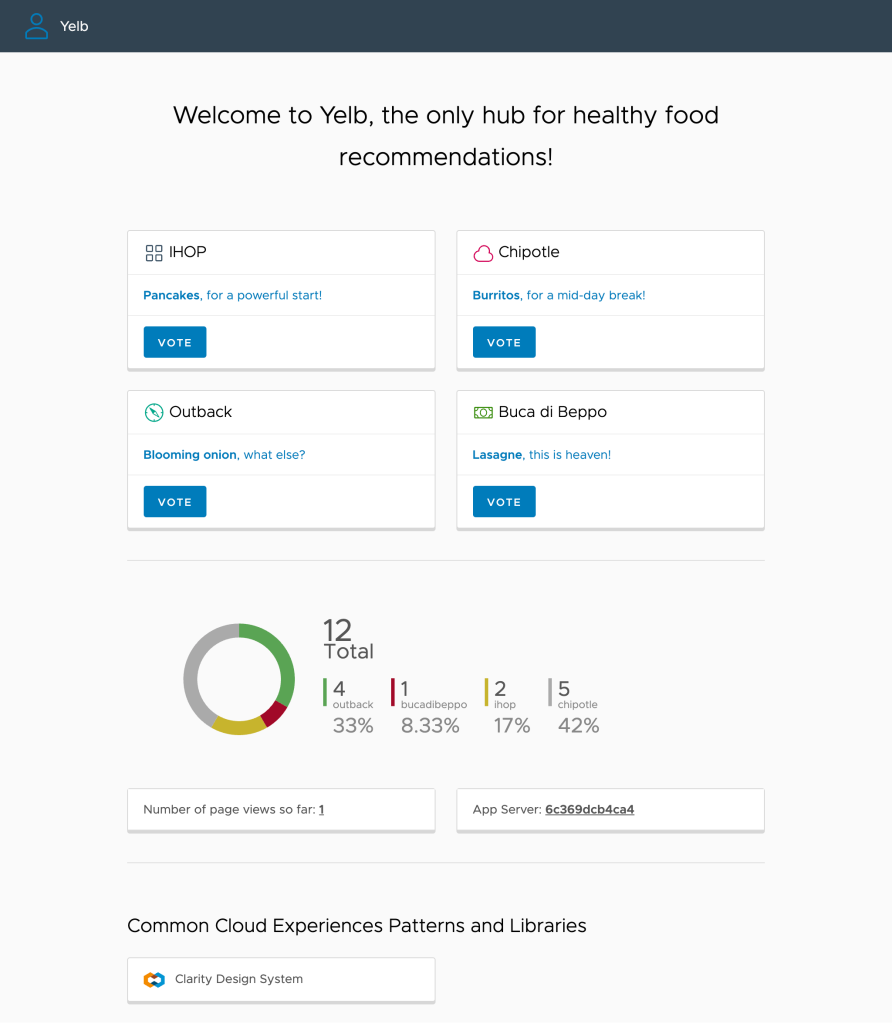 What’s next for Finch?

The project is just getting started. The team will work on adding features iteratively, and is excited to hear from you. We have ideas on making the virtualization more minimal, with faster boot times to make it more transparent for users. We are also interested in making Finch extensible, allowing for optional add-on functionality. As the project evolves, the team will direct contributions into the upstream dependencies where appropriate. We are excited to support and contribute to the success of our core dependencies: nerdctl, containerd, BuildKit, and Lima. As mentioned previously, one of the exciting things about Finch is shining a light on the projects it depends upon.

Please join us! Start a discussion, open an issue with new ideas, or report any bugs you find, and we are definitely interested in your pull requests. We plan to evolve Finch in public, by building out milestones and a roadmap with input from our users and contributors. We’d also love feedback from you about your experiences building and using containers daily and how Finch might be able to help!