Modern applications built using microservices patterns are distributed and dynamic by nature. Deploying these applications to Kubernetes clusters tightly couples the application and cluster together. Increasingly, customers are asking for the ability to deploy applications across clusters to allow for easier upgrades and migrations and to break down isolation boundaries. However, bridging the gap between clusters requires platform and operations teams to implement complex routing and maintain a centralized service registry. This can be complicated, time-consuming, and error-prone. To work around these issues, some customers run third-party service discovery solutions that orchestrate service discovery. However, these tools require deploying and managing that software as an additional application dependency, which increases infrastructure, development, and maintenance costs.

Amazon is announcing an open source project, AWS Cloud Map MCS Controller for K8s, distributed under the Apache License, Version 2.0. It allows a Kubernetes-native service discovery capability that works across Kubernetes (K8s) clusters. Multicluster service discovery allows applications to understand what services exist in an environment so that they can discover and communicate with each other, even when applications are deployed across several Kubernetes clusters. It simplifies building and operating services that run across multiple Kubernetes clusters.

This functionality is enabled via the AWS Cloud Map MCS Controller for K8s, an open source implementation of the Kubernetes proposed API, KEP-1645: Multicluster Services API. We recognize the Kubernetes community’s strong preference for open source solutions; therefore, open sourcing the implementation reflects the shared effort to move the emerging multicluster specification from alpha to beta stage. Furthermore, the development community will be able to take our implementation and adjust it to work with other service registries for on-premises use cases.

AWS Cloud Map is a fully managed service discovery tool for all the cloud resources and application components that help your applications connect to the correct endpoints, making your deployments safer and reducing the complexity of the infrastructure code. The AWS Cloud Map MCS Controller for K8s is the AWS implementation of Multicluster Services API based on AWS Cloud Map.

In this post, we will walk you through how you can use AWS Cloud Map MCS Controller for K8s to create a multicluster DNS service name that can be accessed within and across clusters seamlessly. This capability can lead to reduced impact from failures, automatic failover functionality, easier Kubernetes upgrades, and security and isolation between teams within an organization. 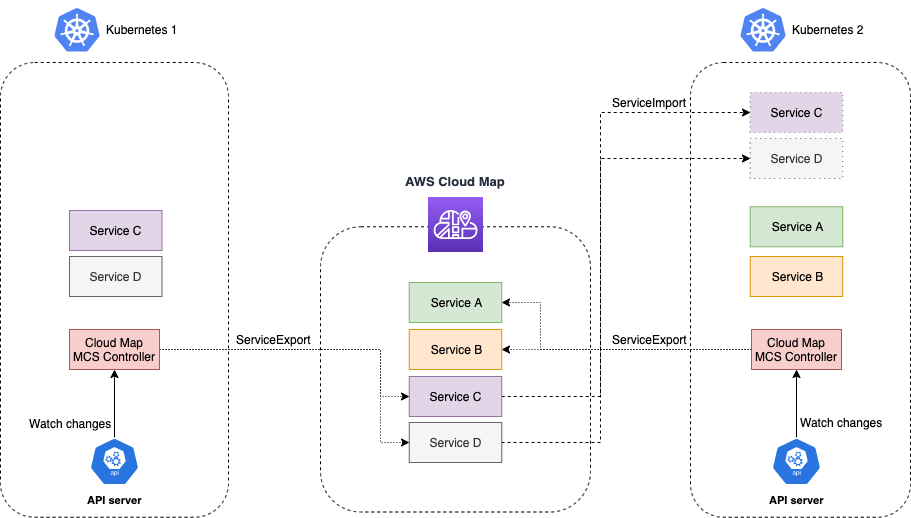 This blog assumes prerequisites have been completed prior to deploying AWS Cloud Map Multicluster Service Controller for K8s. To get started with the AWS Cloud Map MCS Controller for K8s, first ensure you have two Amazon Elastic Kubernetes Service (EKS) clusters and that they can communicate with each other. Each cluster should be running Kubernetes 1.21+. In this example, we will use Virtual Private Cloud (Amazon VPC) peering but this will also work if your Amazon EKS clusters reside in the same VPC. To test connectivity between clusters, you can use the VPC Reachability Analyzer, a configuration analysis tool that lets you perform connectivity testing between a source resource and a destination resource in your Virtual Private Clouds (VPCs).

Once you’re able to access the cluster and run kubectl commands, install the controllers on both clusters by running the following:

CoreDNS, by default, supports DNS resolution within a single cluster. By adding the multicluster plugin, we enable DNS resolution across clusters. You also have the option to build your own image but doing so is out of the scope of this blog.

The update will change the DNS name of the service in the following way: 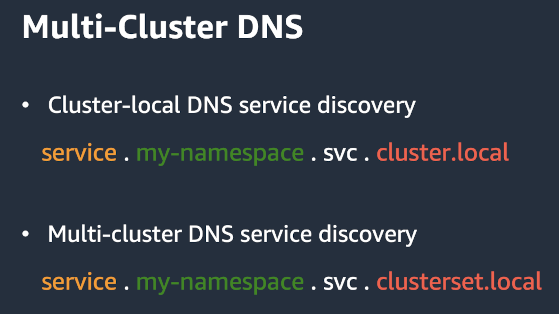 After the prerequisites are complete, create the namespace in each cluster where your applications will reside.

On the first cluster, create the Kubernetes Namespace.

On the second cluster, create the Kubernetes Namespace.

The following three commands will install the sample Kubernetes Deployment, Service, and ServiceExport objects. Run these in the first cluster only.

Next, to test reaching EndpointSlices, create a busybox container in the second cluster, exec into it, and access the new service name.

In this post, we explored the most common issues customers face when attempting to adopt a multicluster architecture and how AWS Cloud Map MCS Controller for K8s enables multicluster service discovery. AWS Cloud Map MCS Controller for K8s implements a multicluster service architecture within the same Region or extended across Regions and accounts. We demonstrated how this can be configured using Amazon EKS and AWS Cloud Map. The project is distributed under the Apache 2.0 License, and you can find more information about its use, the latest version of the controller, and how to contribute by visiting the project’s GitHub page.