This blog was co-authored by Alfredo Polito, Chief Technology Officer of Roomie.

Roomie leverages AWS and open-source tools to build and deploy a wide variety of custom robot solutions for their customers across Mexico and Latin America. Roomie has created a cloud native architecture and uses AWS RoboMaker Simulation to scale and accelerate robotics development. Roomie, a fast-growing robotics startup based in Mexico City, has taken on the challenge to build interactive utility robots. Roomie builds robots to fit the needs of their customers who span a variety of industries including hospitality, manufacturing, and healthcare. With over 40 developers trained and certified in AWS services, Roomie was recognized by the MIT Technology Review as one of the most innovative startups in Latin America, and as one of the 30 most promising businesses for 2021 by Forbes Mexico.

Robotics companies typically build solutions by identifying an operational pain-point or customer need, then build robot prototypes to validate the feasibility of the opportunity. Most robotics startups start with building a single customer use-case and then raise capital to scale their business model. However, robotics companies face challenges scaling. Typically, prototypes heavily depend on bespoke tools and services. With an architecture of various services, it’s difficult for robotics companies to scale deployment while maintaining reliability, security, and operational excellence. Additionally, since robotics start-ups typically only have a few hardware units, it’s difficult for developers to get adequate access to the hardware for sufficient testing and integration strategies. This results in slowdowns in development speed, in late-stage production errors, and costly re-development of features.

Roomie wanted to avoid such pitfalls by developing a scalable robot platform that would streamline adaptability of their robot to different use cases. The team at Roomie set out to execute a two-fold development strategy. First, engineers at Roomie designed system architectures incorporating cloud service capabilities to avoid developing software from scratch. This saved them development time and improved their robot functionality. Second, engineers at Roomie implemented an automatic testing workflow in simulation to test operating scenarios before deploying them to physical robots. This enables them to validate and test new code without waiting on the limitations of physical hardware.

Roomie integrated their hardware platforms with AWS services such as Amazon CloudWatch, Amazon Lex, Amazon Kinesis, Amazon S3, and Amazon Recognition via the AWS RoboMaker cloud Extensions for ROS. Integrating Roomie’s robots with Amazon Lex and Amazon Polly via the ROS cloud extension gave Roomie’s robots the ability to communicate and interact with users in a personal way. The team at Roomie used rosbag cloud extension for AWS RoboMaker to easily record and upstream their robot applications data with Amazon S3. Additionally, this approach allowed them to run queries and gain operational insight from their data with Amazon Athena in the cloud.

For robots to interact safely in the real-word, they need advanced perception and artificial intelligence capabilities. The team at Roomie developed an obstacle detection and perception system using the Amazon Rekognition and Amazon Kinesis cloud extensions. Using CloudWatch metrics and logs engineers at Roomie were able to track incidents in their adaptive monte carlo localization stack by monitoring parameters such as PoseWithCovariance with alarms, PoseWithCovariance represents an estimation of the robot’s position in a map. Anytime a miss-localization incident would occur, engineers could trigger an alarm, and swiftly debug and troubleshoot complex behaviors that otherwise would take days to identify. 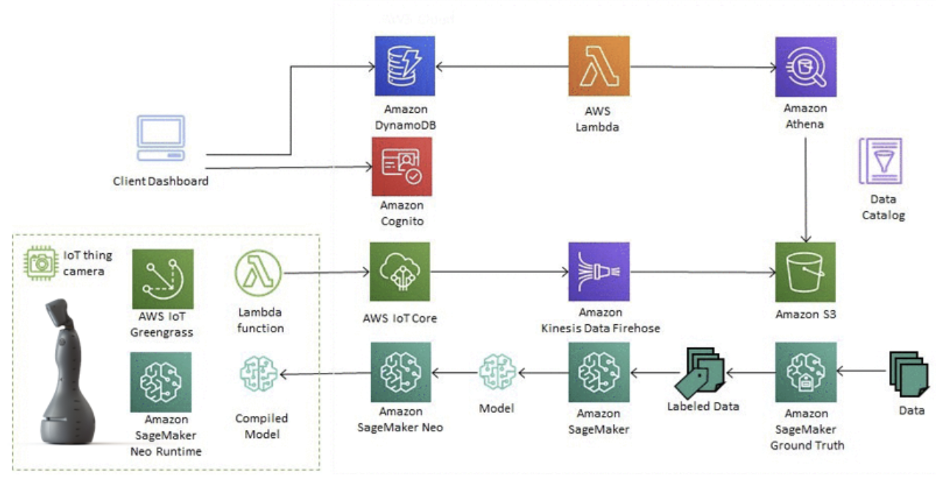 Engineers at Roomie began using AWS RoboMaker to test a hospital use case for their robot. They developed this robot in response to declining hospital capacity in Mexico City during the COVID-19 pandemic. This robot was designed by Roomie Engineers to identify suspected cases of COVID-19 to help protect medical personnel and patients, avoid the spread of contagious cases, and strengthen the health system at the most critical point of the pandemic. To develop, test, and deploy this robot quickly and safely, Roomie sought out an alternative to the traditional linear robotics development workflow (Figure 2).

The traditional robotics development workflow prevented Roomie from developing software until a physical robot was built and met design and manufacturing standards. Additionally, it would be difficult for Roomie to access real hospital environments for testing, slowing down development and iteration cycles. To avoid development delays, Roomie improved their development workflow (Figure 3) with AWS RoboMaker. Testing in RoboMaker enabled Roomie to test lidar-based navigation and map generation using simulation without waiting for the hardware team to build physical robots. Roomie engineers could work simultaneously, test different software modules, and complex behaviors, at different layers throughout early stages of robot development. Validation and verification with parallel simulations sped up development time and provided Roomie the confidence to deploy their robots in a safety critical environment like a hospital.

Alfredo Polito, Roomie’s CTO, estimates team efficiency gains of 5.5 weeks of development time by using AWS RoboMaker Simulation. According to Alfredo, “Each engineering team was able to have a “simulated robot” all day, to develop, test, and try all ideas without being interrupted. After development and testing in simulation, they are able to converge again in areas that require development integration and testing with the physical robot.” 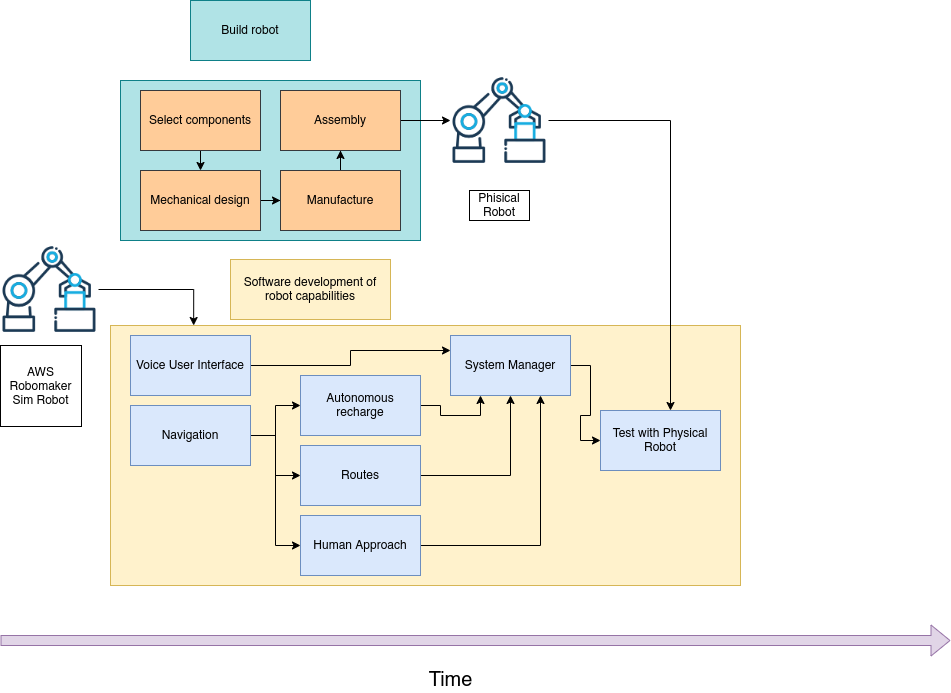 Engineers at Roomie used the open-source AWS RoboMaker Hospital World. This made it possible for Roomie to get started quickly running simulations in an pre-made simulation environment with the baseline characteristics of the robot’s environment.

AWS and open-source tools enable Roomie to scale custom robot development. In this blog, we walked through how Roomie adds functionality to their robots by connecting to cloud service capabilities, without additional development resources. We also walked through how AWS RoboMaker Simulation helped Roomie speed up their development workflow and without the limitations of physical testing. To learn more about how AWS RoboMaker helps you scale robot deployments, Contact Us.