Announcing PartiQL: One query language for all your data

Data is being gathered and created at rates unprecedented in history. Much of this data is intended to drive business outcomes but, according to the Harvard Business Review, “…on average, less than half of an organization’s structured data is actively used in making decisions…”

The root of the problem is that data is typically spread across a combination of relational databases, non-relational data stores, and data lakes. Some data may be highly structured and stored in SQL databases or data warehouses. Other data may be stored in NoSQL engines, including key-value stores, graph databases, ledger databases, or time-series databases. Data may also reside in the data lake, stored in formats that may lack schema, or may involve nesting or multiple values (e.g., Parquet, JSON). Every different type and flavor of data store may suit a particular use case, but each also comes with its own query language. The result is tight coupling between the query language and the format in which data is stored. Hence, if you want to change your data to another format, or change the database engine you use to access/process that data (which is not uncommon in a data lake world), or change the location of your data, you may also need to change your application and queries. This is a very large obstacle to the agility and flexibility needed to effectively use data lakes.

Today we are happy to announce PartiQL, a SQL-compatible query language that makes it easy to efficiently query data, regardless of where or in what format it is stored. As long as your query engine supports PartiQL, you can process structured data from relational databases (both transactional and analytical), semi-structured and nested data in open data formats (such as an Amazon S3 data lake), and even schema-less data in NoSQL or document databases that allow different attributes for different rows. We are open sourcing the PartiQL tutorial, specification, and a reference implementation of the language under the Apache2.0 license, so that everyone can participate, contribute, and use it to drive widespread adoption for this unifying query language. 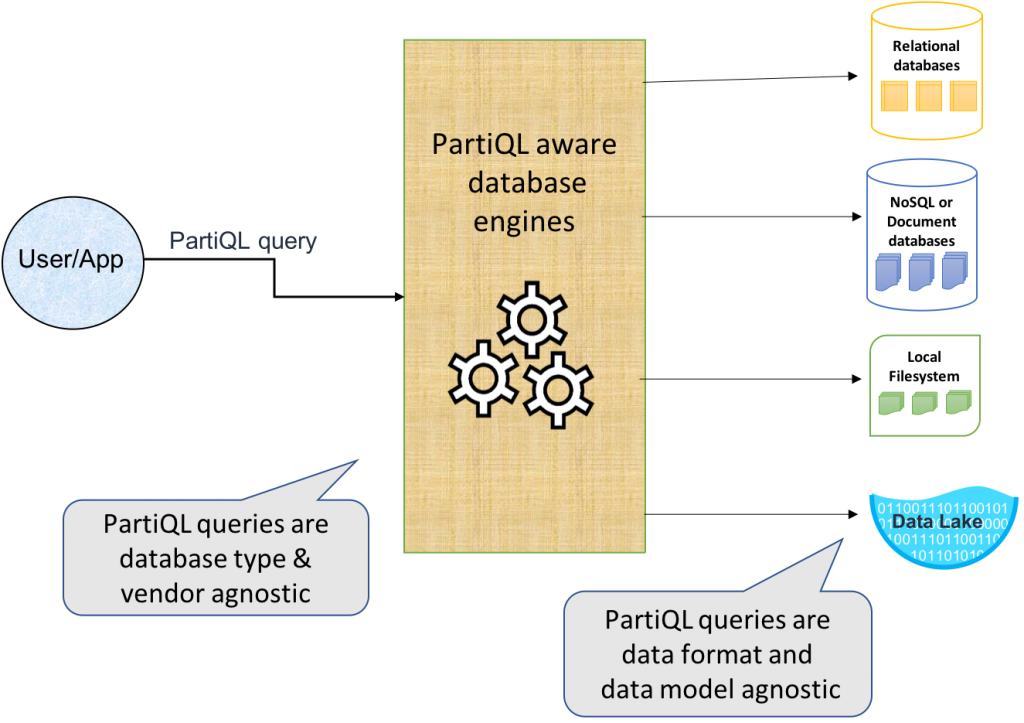 We look forward to the creators of data processing engines diving deep into PartiQL, and joining us in solving a problem that affects all users of data, across all industries.

Why we built it

We developed PartiQL in response to Amazon’s own needs to query and transform vast amounts and varieties of data – not just SQL tabular data, but also nested and semi-structured data – found in a variety of formats and storage engines. Amazon’s retail business already had vast sets of semi-structured data, most often in the Ion format. Amazon’s retail business, led by Chris Suver, was in pursuit of an SQL-like query language. Multiple AWS services, such as QLDB, saw the benefits of schema-optional, document-oriented data models, but also wanted to leverage existing SQL knowledge and tools. Finally, the AWS relational database services like Redshift, and the many existing clients of SQL, needed to expand into accessing the non-relational data of the data lake, while maintaining strict backwards compatibility with SQL. At the same time, the database research community, with query language works like UCSD’s SQL++, was showing that it is possible to devise clean, well-founded query languages that stay very close to SQL, while having the power needed to process nested and semi-structured data.

Don Chamberlin, creator of the SQL language specification, says: “As JSON and other nested and semi-structured data formats have increased in importance, the need for a query language for these data formats has become clear. The approach of adapting SQL for this purpose has the advantage of building on our industry’s investment in SQL skills, tools, and infrastructure. The SQL++ proposal of Dr. Yannis Papakonstantinou, and languages based on SQL++ such as PartiQL, have shown that the extensions to SQL needed for querying semistructured data are fairly minimal. I hope that these small language extensions will help to facilitate a new generation of applications that process data in JSON and other flexible formats, with and without predefined schemas.”

We therefore set out to create a language that offers strict SQL compatibility, achieves nested and semi-structured processing with minimal extensions, treats nested data as a first-class citizen, allows optional schema, and is independent of physical formats and data stores.

The result was PartiQL, which provides a simple and consistent way to query data across a variety of formats and services. This gives you the freedom to move your data across data sources, without having to change your queries. It is backwards-compatible with SQL, and provides extensions for multi-valued, nested, and schema-less data, which blend seamlessly with the join, filtering, and aggregation capabilities of standard SQL.

The following design tenets captured our design goals and were fundamental to PartiQL:

Past languages have addressed subsets of these tenets. For example, Postgres JSON is SQL-compatible, but does not treat the JSON nested data as a first-class citizen. Semi-structured query languages treat nested data as first-class citizens, but either allow occasional incompatibilities with SQL, or do not even look like SQL. PartiQL is the first language to address this full set of tenets.

As you would expect from its design tenets, PartiQL will be both easy and familiar for SQL users. It has been in use by several customers of Amazon Redshift Spectrum since 2018:

Annalect is Omnicom’s global data and analytics arm, providing purpose-built, scalable solutions that make data actionable, and is the driving force behind Omnicom’s revolutionary precision marketing and insights platform, Omni. “PartiQL enables us to query nested data with Amazon Redshift Spectrum directly in Amazon S3 without un-nesting, and will also enable us to easily bring nested data from Amazon S3 into local tables in Amazon Redshift using standardized language,” said Eric Kamm, senior engineer and architect at Annalect. John Briscoe, Director of Data and Operations at Annalect added: “We’re also excited that it will give us consistent query syntax from one data platform to another, allowing for easier development of multi-data platform applications and easier developer onboarding.”

Unlike traditional SQL, the PartiQL query language also meets the needs of NoSQL and non-relational databases. PartiQL has already been adopted by the Amazon Quantum Ledger Database (QLDB) as their query language.

Andrew Certain, AWS Senior Principal Engineer and Amazon Quantum Ledger Database (QLDB) architect, says about the choice of PartiQL: “QLDB needed a flexible, document-oriented data model so that users can easily store and process both structured and semi-structured data, without the burden of defining and evolving a schema. At the same time, QLDB wanted to benefit from the wide knowledge of SQL. PartiQL has greatly served both purposes. Its extensions for accessing nested and semistructured data are few, powerful and quite intuitive.” QLDB, currently in preview mode, is one of the AWS services that adopted PartiQL.

Ravi Mayuram, Senior Vice President of Engineering and CTO of Couchbase, says: “As a pioneer in bringing SQL to JSON when we introduced N1QL more than three years ago, Couchbase believes that the foundations on which SQL was built for relational databases are just as sound for a JSON data model and database. PartiQL is a welcome next step in this convergence, and we look forward to supporting it.” 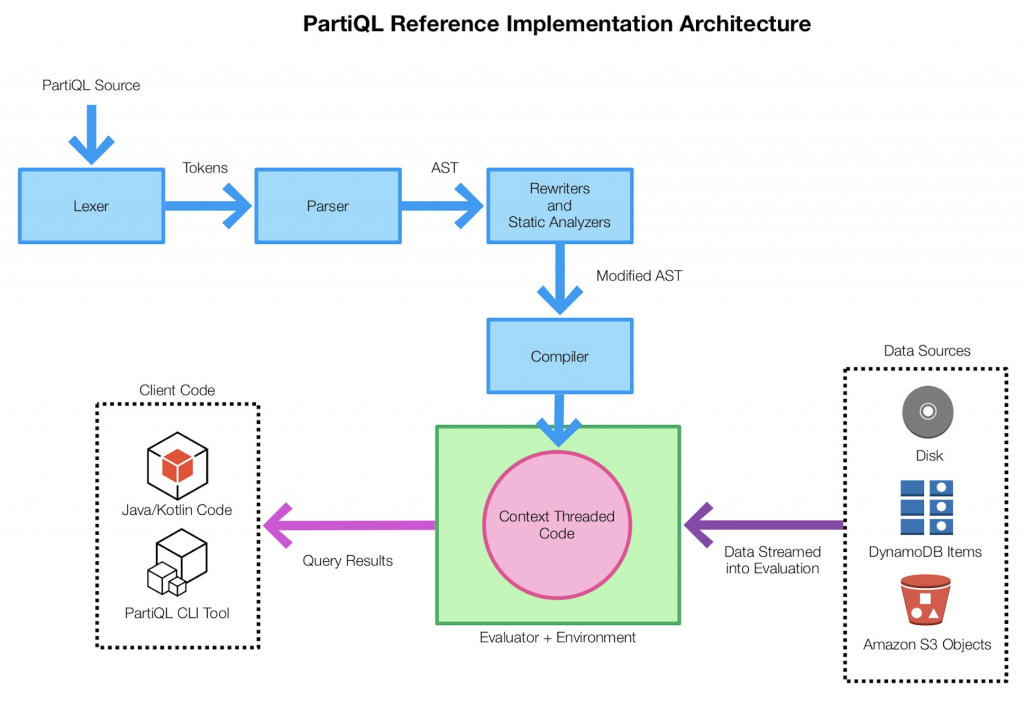 This diagram shows, at a very high level, the PartiQL reference implementation. We are open sourcing the lexer, parser, and compiler for PartiQL query expressions. We provide a library that can be embedded or used as a standalone tool for running queries. A user could use this library to simply validate PartiQL queries, or to embed a PartiQL evaluator to process data within their system. The library provides a data interface to bind to whatever data back end an application may have, and provides out-of-the-box support for Ion and JSON.

Follow the instructions for Installing the JDK Software and Setting JAVA_HOME to the path where your Java Runtime is installed.

Each release of PartiQL comes with an archive that contains the PartiQL REPL as a zip file.

You may have to click on Assets to see the zip and tgz archives. Download the latest partiql-cli zip archive to your machine. The file will append PartiQL’s release version to the archive, i.e., partiql-cli-0.1.0.zip.

Expand (unzip) the archive on your machine, which yields the following folder structure (where ... represents elided files/directories):

Run (double-click on) particl.bat. This should open a command-line prompt and start the PartiQL REPL, which displays:

Write a simple query to verify that your PartiQL REPL is working. At the PartiQL> prompt type:

and press ENTER twice. The output should look similar to:

To exit the PartiQL REPL, press:

or close the terminal/command prompt window.

An easy way to load the necessary data into the REPL is use the -e switch when starting the REPL and provide the name of a file that contains your data:

You can then see what is loaded in the REPL’s global environment using the special REPL command !global_env, i.e.,

How to participate in PartiQL

PartiQL is fully open sourced under the Apache2.0 license. We welcome your contributions in further expanding the specification, building the technology and increasing its adoption & mindshare in the user community. Learn more about PartiQL.

You can contribute to the project by sending a pull request for a good first issue. File an issue if there are bugs or missing features. Read through the tutorial to understand PartiQL syntax, how it extends SQL, and take a step-by-step walkthrough. Want to learn about every little detail of PartiQL? Read through the specification. You can also talk to us in the PartiQL Discourse community.

Learn more about PartiQL in these re:Invent sessions: