In 2014, AWS introduced Amazon Elastic Container Service (Amazon ECS) as a simplified way for customers to address the complexity of managing containers on their EC2 instances at any scale. As adoption increased, customers responded with a new challenge: remove the undifferentiated heavy lifting of having to deal with EC2 instances. In 2018, we announced AWS Fargate, a serverless platform to run containers without having to deal with infrastructure details.

In the last two years, customers sought more flexibility in where they could deploy containers using Amazon ECS. They had an increasing number of use cases that required applications to run outside AWS Regions and closer to their other services, wherever they may be located. In 2019 and 2020, we made a series of announcements that made launching Amazon ECS tasks outside of the AWS Region a viable option. We introduced AWS Outposts, a service that extends AWS infrastructure, services, APIs, and tools to customers’ premises using AWS owned and fully managed hardware. We also introduced AWS Wavelength and AWS Local Zones to accommodate specific latency and network connectivity, with full support for Amazon ECS.

However, some customers asked for more options. For example, some of them have made significant capital investments in their data centers. These customers want to make good use of that capacity albeit they understand it may require more work to manage it. Other customers operate in a highly regulated industry. They may have specific compliance or regulatory requirements that force them to own and operate their infrastructure. While these customers may be all-in on cloud, they also have to consider the practical constraints (financial resources or specialized workloads, for example) that inhibit them.

Customers love the simplicity of Amazon ECS and the fact that “it just works.” However, their deployment requirements may go beyond AWS owned infrastructure and they can’t afford to use different container management technologies for different deployment targets. To make their investments sound, they need to focus on a single experience that allows them to achieve the flexibility that they need.

The following is a high-level visual representation of the Amazon ECS data plane flexibility. It includes the new ECS Anywhere deployment model that will come to fruition next year: 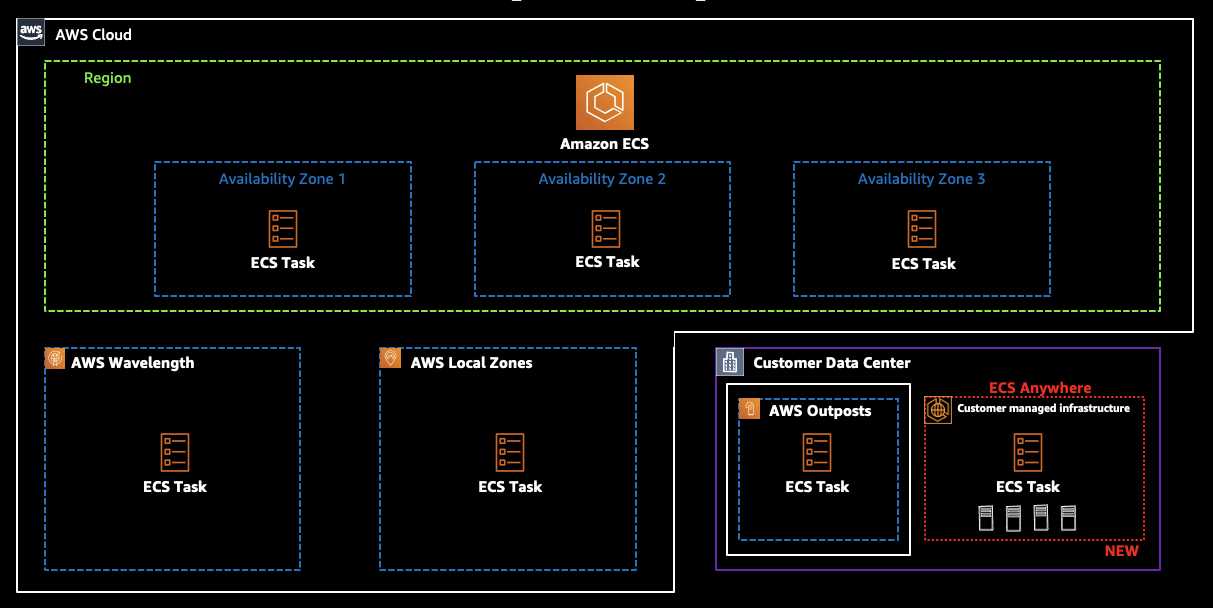 These will be regular ECS tasks and will have, for example, a “task role” and a “task execution role” assigned. This means they will be able to interact, if need be, with cloud services in the Region as if they were deployed in the Region. However, there will also be effectively local resources running on customer managed operating system and with local network connectivity. This will allow Amazon ECS applications deployed “externally” to appreciate low latency and high bandwidth when connecting to services running in proximity in the same data center.

Finally, the following are the high-level tenets we are using to build ECS Anywhere:

Note that these capabilities are currently in development. Some details may change before general availability.

This is an exciting evolution for Amazon ECS and we are looking forward to its general availability next year. In the meantime, to see scenarios where ECS Anywhere could help, check out this early demo. Join our mailing list for updates about ECS Anywhere.

[ Update 5/28/2021 ] With the general availability of ECS Anywhere, we are making available the code we have used to build and record the demo below. Check it out on GitHub.