A virtual private network (VPN) is one of the most common ways that customers connect securely to the AWS Cloud from on-premises or data center environments. Customers establish VPN connectivity to AWS using AWS managed VPN solutions like AWS Site-to-Site VPN, transit gateways, or partner solutions running on Amazon EC2. In this post, we demonstrate how you can use AWS Transit Gateway to scale an AWS Site-to-Site VPN throughput beyond a single IPsec tunnel’s maximum limit of 1.25 Gbps limit.

Typically, when connecting multiple VPCs to the on-premises environment, each VPC must have a separate VPN connection through a respective virtual private gateway, or follow the transit VPC architecture. VPN connection is a secure connection between your on-premises equipment and your VPCs. Each VPN connection has two VPN tunnels which you can use for high availability. VPN tunnel is an encrypted link where data can pass from the customer network to or from AWS. The following diagram shows the high-level connectivity with virtual private gateways.

With AWS Transit Gateway, you can simplify the connectivity between multiple VPCs and also connect to any VPC attached to AWS Transit Gateway with a single VPN connection. AWS Transit Gateway also enables you to scale the IPsec VPN throughput with equal cost multi-path (ECMP) routing support over multiple VPN tunnels. A single VPN tunnel still has a maximum throughput of 1.25 Gbps. If you establish multiple VPN tunnels to an ECMP-enabled transit gateway, it can scale beyond the default maximum limit of 1.25 Gbps.  You also must enable the dynamic routing option on your transit gateway to be able to take advantage of ECMP for scalability. ECMP in transit gateway uses 5-tuple hash (protocol number, source IP address, destination IP address, source port number, destination port number) to make packets take one of the paths or VPN tunnels. Similarly, customers must configure customer gateway (CGW) to leverage ECMP thereby performing the hash to forward packets equally over multiple paths.

To validate the traffic over multiple tunnels, suggestion is to use multiple flows while sending traffic to make full use of maximum tunnels. Single flow is mapped to single tunnel, so it cannot get more than 1.25Gbps throughput. In the following walkthrough, parallel streams are used in iperf command (-P Parameter) to use different tunnels.

Five-tuple hashing with ECMP results in asymmetric routing with multiple tunnels, which is okay because IP routing is stateless. In the case of the customer gateway being a stateful firewall, it might be necessary to create a source NAT rule for the traffic to make sure that there are symmetric flows.

In this post, you configure four tunnels sequentially to demonstrate higher throughput with a transit gateway with the increase in the number of tunnels. The following diagram shows the high-level connectivity with AWS Transit Gateway.

This post assumes that you know the basics about the following concepts:

In this configuration, the AWS side is represented with a VPC along with a transit gateway in the us-east-1 Region and an on-premises data center simulated with a Cisco CSR in us-west-1 Region.

Transit gateway route table with VPC CIDR in the routes

Configuration in Cisco CSR for the interface 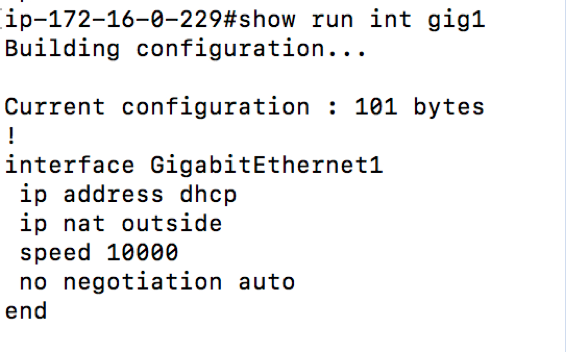 9. Edit the public route table in VPC on-premises to add a specific route to the VPC Alpha CIDR range (10.36.0.0/16) with a CSR elastic network interface. 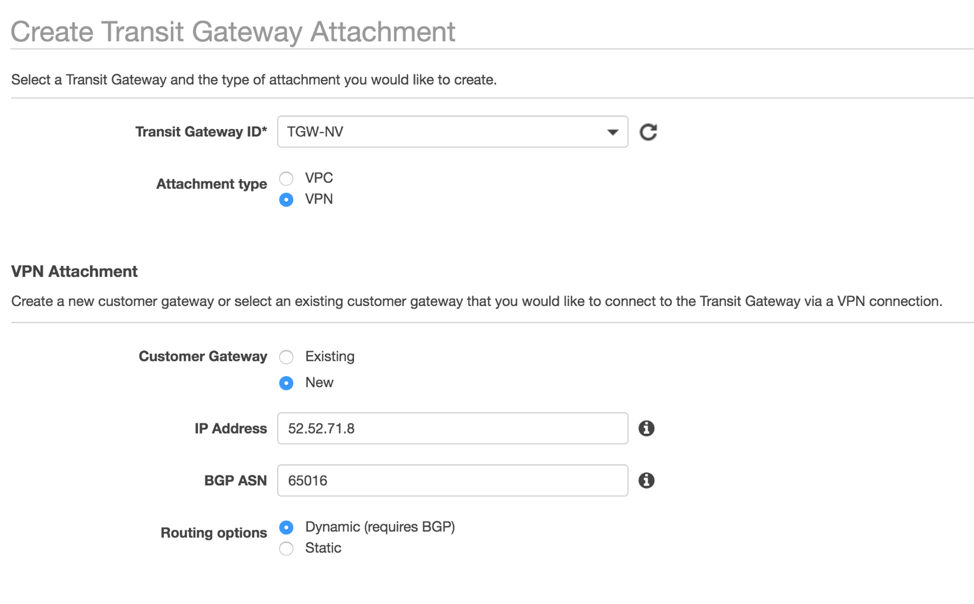 BGP and route table outputs in Cisco CSR with one tunnel 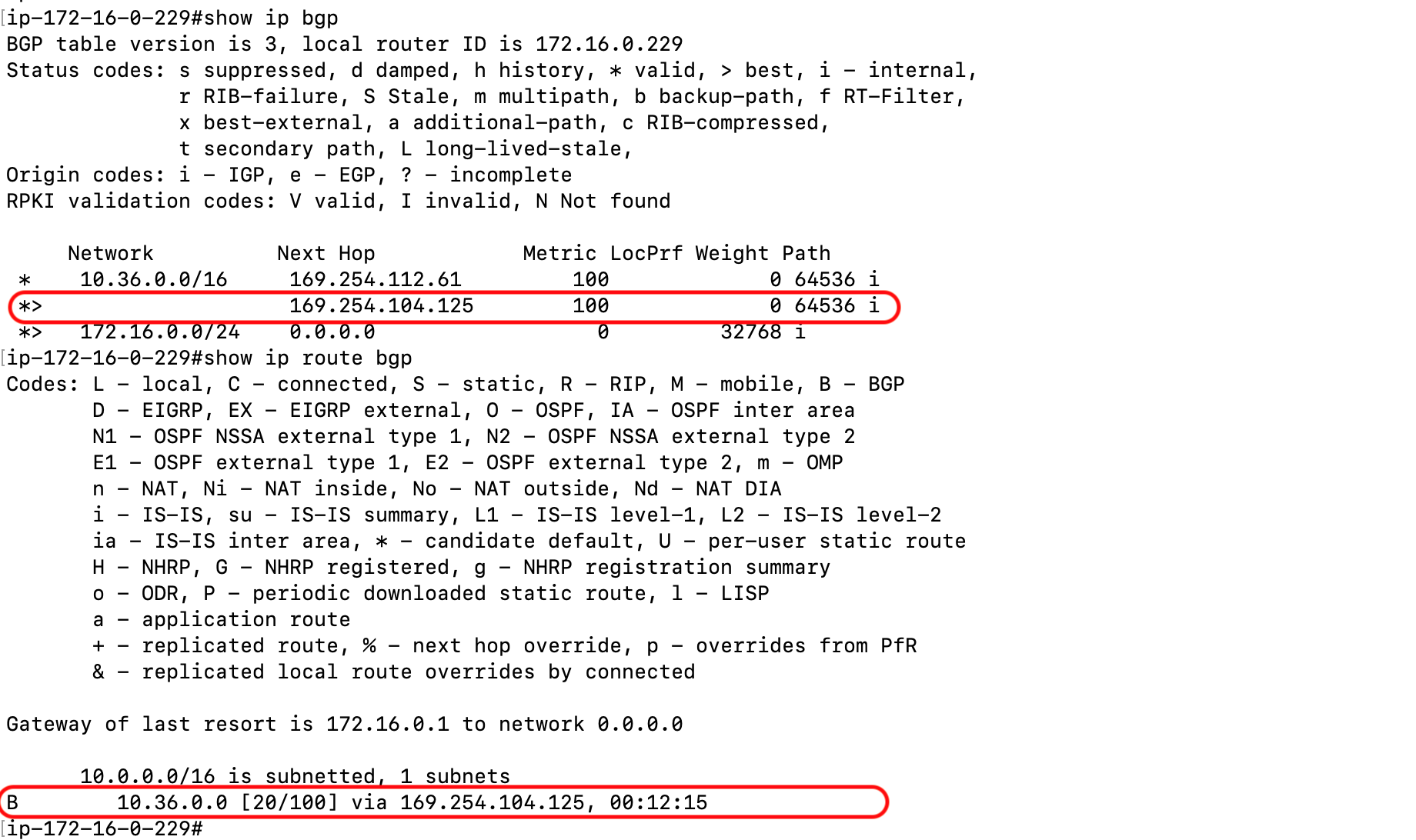 Set up for the traffic test

For the on-premises environment (simulated in us-west-1 Region):

At this stage, you should be getting close to 1-Gbps throughput because only one tunnel is active for forwarding traffic although both tunnels are up. You may see a delay before your throughput increases to ~1Gbps over single tunnel. This is an automatic process that is initiated when AWS detects high usage on your VPN. 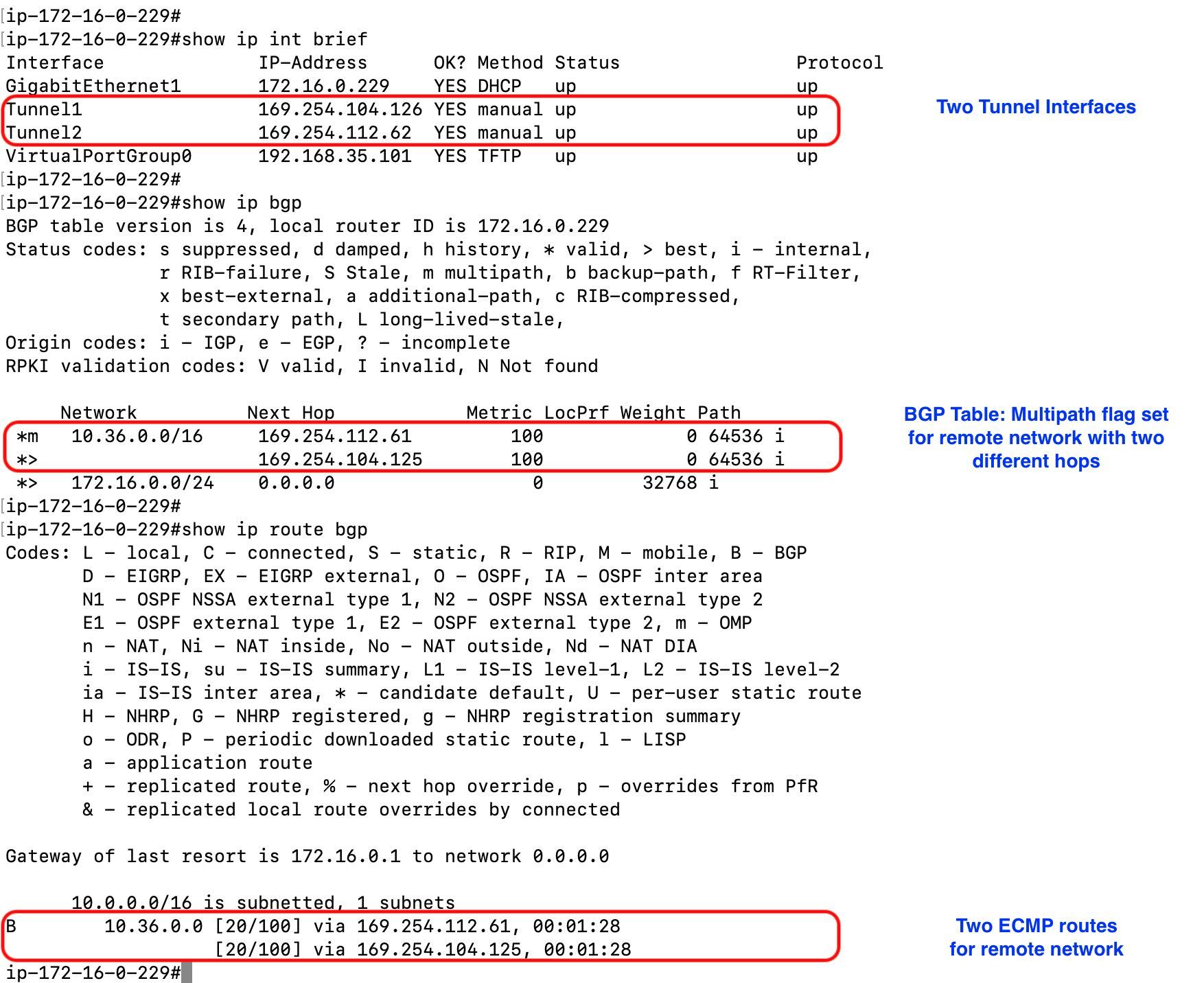 At this point, two tunnels are active and load-sharing the traffic. 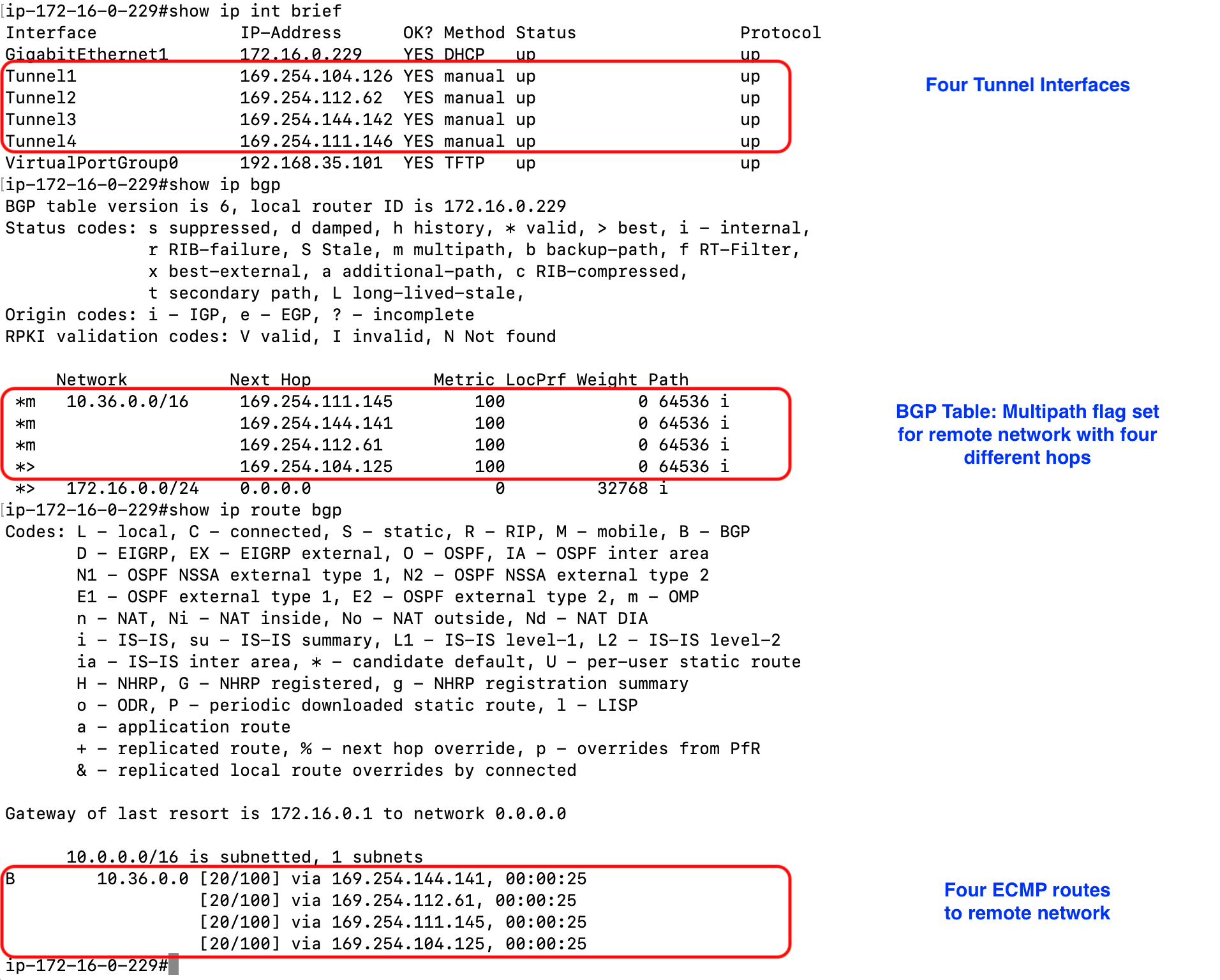 6. Check the transit gateway route table. It should show four attachments for the on-premises network, as shown in the following screenshot

7. Run the iperf traffic test again. You should be getting approximately four times the throughput of a single tunnel. Notice the increase in parallel threads for iperf command with an increase in the number of active tunnels. There are other factors that may influence the performance of aggregated throughput like latency, congestion, packet loss, and protocol operations. So, you may not see exact 4x increase in throughput over four tunnels. The idea behind running the tests with more tunnels is to show how you can scale beyond the default maximum limit of 1.25 Gbps for the IPsec VPN tunnel. For more information, see AWS VPN FAQs. 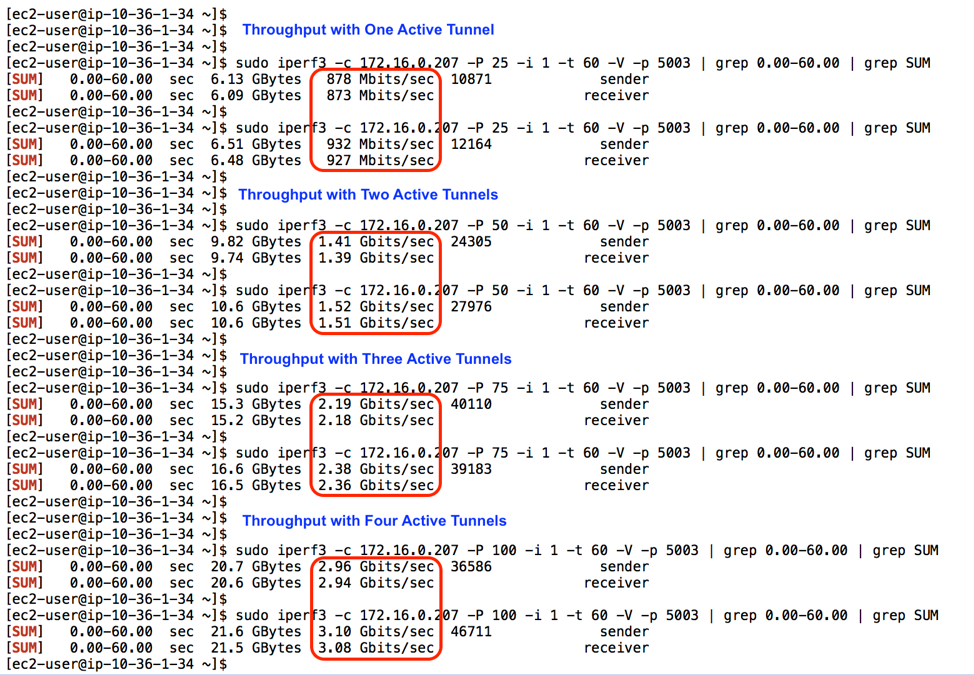 9. Optionally, continue to add more VPN attachments to the transit gateway, and repeat steps 9–12 to scale the VPN throughput up to 50 Gbps. You might have to run sustained traffic tests to see an increase in effective throughput.

AWS Transit Gateway can scale to 50-Gbps capacity and within the limits of the Amazon site-to-site VPC limits.