Boost your infrastructure with the AWS CDK

This guest post is by AWS Container Hero Philipp Garbe. Philipp works as Lead Platform Engineer at Scout24 in Germany. He is driven by technologies and tools that allow him to release faster and more often. He expects that every commit automatically goes into production. You can find him on Twitter at @pgarbe.

Infrastructure as code (IaC) has been adopted by many teams in the last few years. It makes provisioning of your infrastructure easy and helps to keep your environments consistent.

But by using declarative templates, you might still miss many practices that you are used to for “normal” code. You’ve probably already felt the pain that each AWS CloudFormation template is just a copy and paste of your last projects or from StackOverflow. But can you trust these snippets? How can you align improvements or even security fixes through your code base? How can you share best practices within your company or the community?

Fortunately for everyone, AWS published the beta for an important addition to AWS CloudFormation: the AWS Cloud Development Kit (AWS CDK).

What’s the big deal about the AWS CDK?

All your best practices about how to write good AWS CloudFormation templates can now easily be shared within your company or the developer community. At the same time, you can also benefit from others doing the same thing.

For example, think about Amazon DynamoDB. Should be easy to set up in AWS CloudFormation, right? Just some lines in your template. But wait. When you’re already in production, you realize that you’ve got to set up automatic scaling, regular backups, and most importantly, alarms for all relevant metrics. This can amount to several hundred lines.

Think ahead: Maybe you’ve got to create another application that also needs a DynamoDB database. Do you copy and paste all that YAML code? What happens later, when you find some bugs in your template? Do you apply the fix to both code bases?

With the AWS CDK, you’re able to write a “construct” for your best practice, production-ready DynamoDB database. Share it as an npm package with your company or anyone!

What is the AWS CDK?

Back up a step and see what the AWS CDK looks like. Compared to the declarative approach with YAML (or JSON), the CDK allows you to declare your infrastructure imperatively. The main language is TypeScript, but several other languages are also supported.

This is what the Hello World example from Hello, AWS CDK! looks like:

Apps are the root constructs and can be used directly by the CDK CLI to render and deploy the AWS CloudFormation template.

Apps consist of one or more stacks that are deployable units and contains information about the Region and account. It’s possible to have an app that deploys different stacks to multiple Regions at the same time.

Stacks include constructs that are representations of AWS resources like a DynamoDB table or AWS Lambda function. 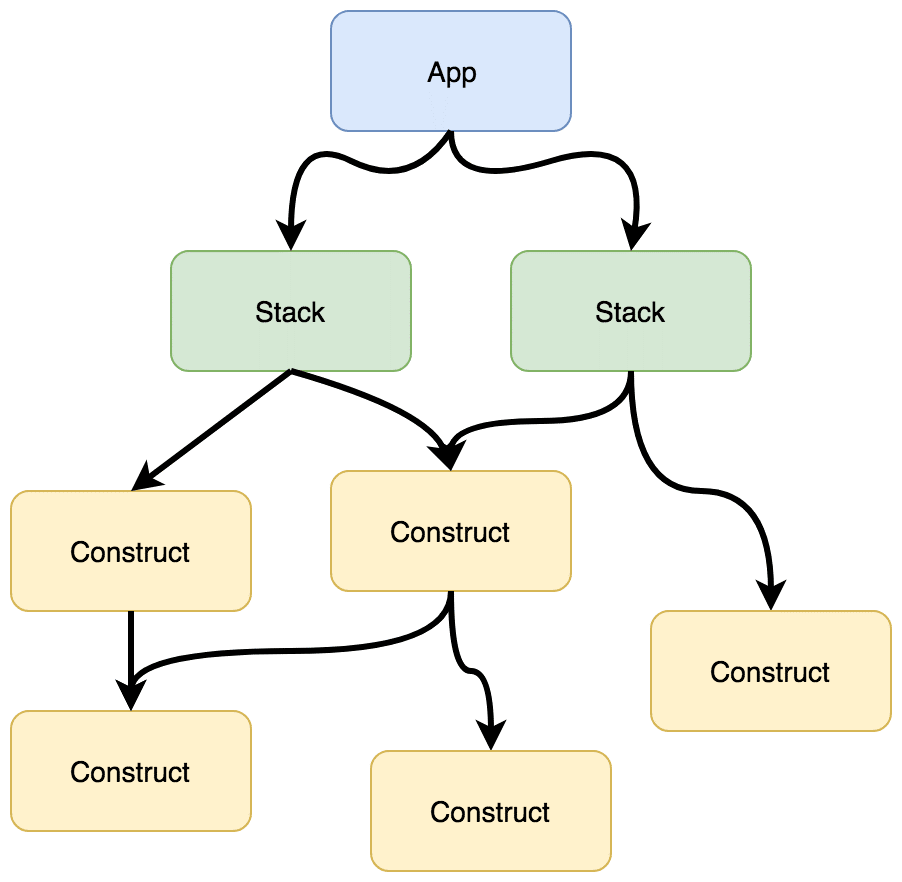 As the CDK is all about constructs, it’s important to understand them. It’s a hierarchical structure called a construct tree. You can think of constructs in three levels:

This is a one-to-one mapping of existing resources and is automatically generated. It’s the same as the resources that you use currently in YAML. Ideally, you don’t have to deal with these constructs directly.

These constructs are on an AWS service level. They’re opinionated, well-architected, and handwritten by AWS. They come with proper defaults and should make it easy to create AWS resources without worrying too much about the details.

As an example, this is how to create a complete VPC with private and public subnets in all available Availability Zones:

The AWS Construct Library has some nice concepts about least privilege IAM policies, event-driven API actions, security groups, and metrics. For example, IAM policies are automatically created based on your intent. When a Lambda function subscribes to an SNS topic, a policy is created that allows the topic to invoke the function.

AWS services that offer Amazon CloudWatch metrics have functions like metricXxx() and return metric objects that can easily be used to create alarms.

Here’s where it gets interesting. As mentioned earlier, constructs are hierarchical. They can be higher-level abstractions based on other constructs. For example, on this level, you can write your own Amazon ECS cluster construct that contains automatic node draining, automatic scaling, and all the right alarms. Or you can write a construct for all necessary alarms that an Amazon RDS database should monitor. It’s up to you to create and share your constructs.

It’s good that AWS went public in an early stage. The docs are already good, but not everything is covered yet. Not all AWS services have an AWS Construct Library module defined (level 2). Many have only the pure AWS CloudFormation constructs (level 1).

Personally, I think the AWS CDK is a huge step forward, as it allows you to re-use AWS CloudFormation code and share it with others. It makes it easy to apply company standards and allows people to work on awesome features and spend less time on writing “boring” code.