Empowerment, Engagement, and Education for Women in Tech

I’ve been earning a living in the technology industry since 1977, when I worked in one of the first computer stores in the country as a teenager. Looking back over the past 40 years, and realizing that the Altair, IMSAI, Sol-20, and North Star Horizon machines that I learned about, built, debugged, programmed, sold, and supported can now be seen in museums (Seattle’s own Living Computer Museum is one of the best), helps me to appreciate that the world I live in changes quickly, and to understand that I need to do the same. This applies to technology, to people, and to attitudes.

I lived in a suburb of Boston in my early teens. At that time, diversity meant that one person in my public school had come all the way from (gasp) England a few years earlier. When I went to college I began to meet people from other countries and continents and to appreciate the fresh vantage points and approaches that they brought to the workplace and to the problems that we tackled together.

Back in those days, there were virtually no women working as software engineers, managers, or entrepreneurs. Although the computer store was owned by a couple and the wife did all of the management, this was the exception rather than the rule at that time, and for too many years after that. Today, I am happy to be part of a team that brings together the most capable people, regardless of their gender, race, background, or anything other than their ability to do a kick-ass job (Ana, Tara, Randall, Tina, Devin, and Sara, I’m talking about all of you).

We want to do all that we can to encourage young women to prepare to become the next generation of engineers, managers, and entrepreneurs. AWS is proud to support Girls Who Code (including the Summer Immersion Program), Girls in Tech, and other organizations supporting women and underrepresented communities in tech. I sincerely believe that these organizations will be able to move the needle in the right direction. However, like any large-scale social change, this is going to take some time with results visible in years and decades, and only with support & participation from those of us already in the industry. 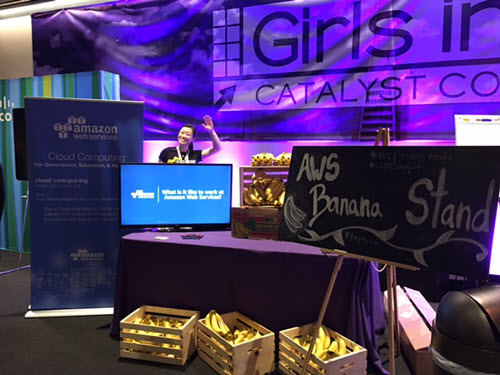 In conjunction with me&Eve, we were able to speak with some of the attendees at the most recent Girls in Tech Catalyst conference (that’s our booth in the picture). Click through to see what the attendees had to say:

I’m happy to be part of an organization that supports such a worthwhile cause, and that challenges us to make our organization ever-more diverse. While reviewing this post with my colleagues I learned about We Power Tech, an AWS program designed to build skills and foster community and to provide access to Amazon executives who are qualified to speak about the program and about diversity. In conjunction with our friends at Accenture, we have assembled a strong Diversity at re:Invent program.

PS – I did my best to convince Ana, Tara, Tina, or Sara to write this post. Tara finally won the day when she told me “You have raised girls into women, and you are passionate in seeing them succeed in their chose fields with respect and equity. Your post conveying that could be powerful.”