The guest post below, written by Ananth Vaidyanathan (Senior Product Manager for EC2 Systems Manager) and Rich Urmston (Senior Director of Cloud Architecture at Pegasystems) shows you how to use EC2 Run Command to manage a large collection of EC2 instances without having to resort to SSH.

You can control Run Command access through standard IAM roles and policies, define documents to take input parameters, control the S3 bucket used to return command output. You can also share your documents with other AWS accounts, or with the public. All in all, Run Command provides a nice set of remote management features.

Better than SSH
Here’s why Run Command is a better option than SSH and why Pegasystems has adopted it as their primary remote management tool:

Run Command Takes Less Time –  Securely connecting to an instance requires a few steps e.g. jumpboxes to connect to or IP addresses to whitelist etc. With Run Command, cloud ops engineers can invoke commands directly from their laptop, and never have to find keys or even instance IDs. Instead, system security relies on AWS auth, IAM roles and policies.

Run Command Operations are Fully Audited – With SSH, there is no real control over what they can do, nor is there an audit trail. With Run Command, every invoked operation is audited in CloudTrail, including information on the invoking user, instances on which command was run, parameters, and operation status. You have full control and ability to restrict what functions engineers can perform on a system.

Run Command has no SSH keys to Manage – Run Command leverages standard AWS credentials, API keys, and IAM policies. Through integration with a corporate auth system, engineers can interact with systems based on their corporate credentials and identity.

Run Command can Manage Multiple Systems at the Same Time – Simple tasks such as looking at the status of a Linux service or retrieving a log file across a fleet of managed instances is cumbersome using SSH. Run Command allows you to specify a list of instances by IDs or tags, and invokes your command, in parallel, across the specified fleet. This provides great leverage when troubleshooting or managing more than the smallest Pega clusters.

Example – Restarting a Docker Container
Here is an example of a simple document used to restart a Docker container. It takes one parameter; the name of the Docker container to restart. It uses the AWS-RunShellScript method to invoke the command. The output is collected automatically by the service and returned to the caller. For an example of the latest document schema, see Creating Systems Manager Documents.

Putting Run Command into practice at Pegasystems
The Pegasystems provisioning system sits on AWS CloudFormation, which is used to deploy and update Pega Cloud resources. Layered on top of it is the Pega Provisioning Engine, a serverless, Lambda-based service that manages a library of CloudFormation templates and Ansible playbooks.

A Configuration Management Database (CMDB) tracks all the configurations details and history of every deployment and update, and lays out its data using a hierarchical directory naming convention. The following diagram shows how the various systems are integrated: 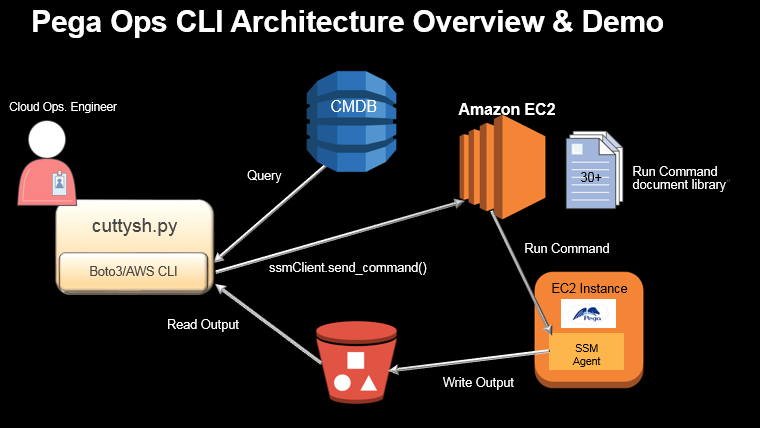 For cloud system management, Pega operations uses a command line version called cuttysh and a graphical version based on the Pega 7 platform, called the Pega Operations Portal. Both tools allow you to browse the CMDB of deployed environments, view configuration settings, and interact with deployed EC2 instances through Run Command.

CLI Walkthrough
Here is a CLI walkthrough for looking into a customer deployment and interacting with instances using Run Command.

Launching the cuttysh tool brings you to the root of the CMDB and a list of the provisioned customers:

In this example, change directories into customer CUSTB’s portion of the CMDB hierarchy, and then further into a provisioned Pega environment called env1, under the Dev network. The tool displays the artifacts that are provisioned for that environment. These entries map to provisioned CloudFormation templates.

The ls –l command shows the version of the provisioned resources. These version numbers map back to source control–managed artifacts for the CloudFormation, Ansible, and other components that compose a version of the Pega Cloud.

Now, use Run Command to interact with the deployed environments. To do this, use the attach command and specify the service with which to interact. In the following example, you attach to the Pega Web Tier. Using the information in the CMDB and instance tags, the CLI finds the corresponding EC2 instances and displays some basic information about them. This deployment has three instances.

From here, you can use the run command to invoke Run Command documents. In the following example, you run the docker-ps document against instance 0 (the first one on the list). EC2 executes the command and returns the output to the CLI, which in turn shows it.

Using the same command and some of the other documents that have been defined, you can restart a Docker container or even pull back the contents of a file to your local system. When you get a file, Run Command also leaves a copy in an S3 bucket in case you want to pass the link along to a colleague.

Now, leverage the Run Command ability to do more than one thing at a time. In the following example, you attach to a deployment with three running instances and want to see the uptime for each instance. Using the par (parallel) option for run, the CLI tells Run Command to execute the uptime document on all instances in parallel.

Summary
Run Command improves productivity by giving you faster access to systems and the ability to run operations across a group of instances. Pega Cloud operations has integrated Run Command with other operational tools to provide a clean and secure method for managing systems. This greatly improves operational efficiency, and gives greater control over who can do what in managed deployments. The Pega continual improvement process regularly assesses why operators need access, and turns those operations into new Run Command documents to be added to the library. In fact, their long-term goal is to stop deploying cloud systems with SSH enabled.

If you have any questions or suggestions, please leave a comment for us!