Many AWS customers are getting great results with the General Purpose SSD (gp2) EBS volumes that we launched in mid-2014 (see New SSD-Backed Elastic Block Storage for more information).  If you’re unsure of which volume type to use for your workload, gp2 volumes are the best default choice because they offer balanced price/performance for a wide variety of database, dev and test, and boot volume workloads. One of the more interesting aspects of this volume type is the burst feature.

We designed gp2‘s burst feature to suit the I/O patterns of real world workloads we observed across our customer base. Our data scientists found that volume I/O is extremely bursty, spiking for short periods, with plenty of idle time between bursts. This unpredictable and bursty nature of traffic is why we designed the gp2 burst-bucket to allow even the smallest of volumes to burst up to 3000 IOPS and to replenish their burst bucket during idle times or when performing low levels of I/O. The burst-bucket design allows us to provide consistent  and predictable performance for all gp2 users. In practice, very few gp2 volumes ever completely deplete their burst-bucket, and now customers can track their usage patterns and adjust accordingly.

We’ve written extensively about performance optimization across different volume types and the differences between benchmarking and real-world workloads (see I/O Characteristics for more information). As I described in my original post, burst credits accumulate at a rate of 3 per configured GB per second, and each one pays for one read or one write. Each volume can accumulate up to 5.4 million credits, and they can be spent at up to 3,000 per second per volume. To get started, you simply create gp2 volumes of the desired size, launch your application, and your I/O to the volume will proceed as rapidly and efficiently as possible.

New Metric
Effective today, we are making the Burst Balance metric available for each General Purpose (SSD) volume. You can observe this metric in the CloudWatch Console and you can set up an alarm that will be triggered if the balance becomes too low. The metric is expressed as percentage; 100% means that the volume has accumulated the maximum number of credits.

I launched a c4.8xlarge instance and attached a 100 GB volume to it:

Then I created an alarm to let me know if the volume’s burst balance went below 40% (in a real-world scenario you might want to set this considerably lower, but I was impatient and it takes a fair amount of time to drain the balance):

I confirmed my SNS subscription, and then ran fio to generate a load:

Then I watched as the balance declined: 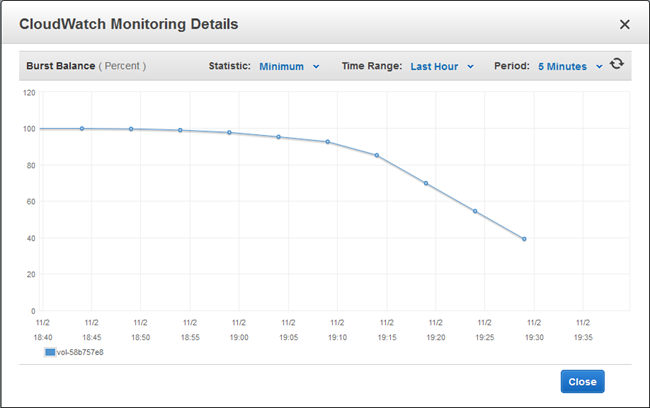 As expected, I received a notification email: 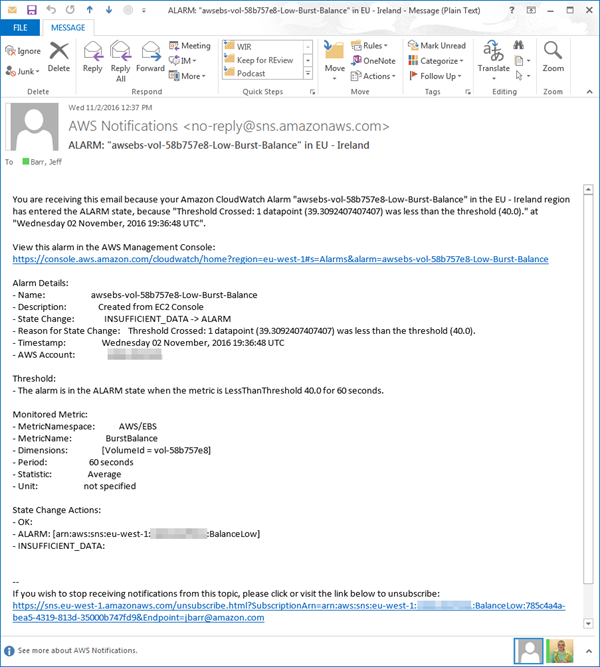 In a production scenario, I could choose to increase the size of the volume, fine-tune my application’s I/O behavior, or simply note for the record that I was making good use of the burst-bucket.

After the end of the test, I had lunch and watched the burst balance increase (I used the updated CloudWatch Console this time): 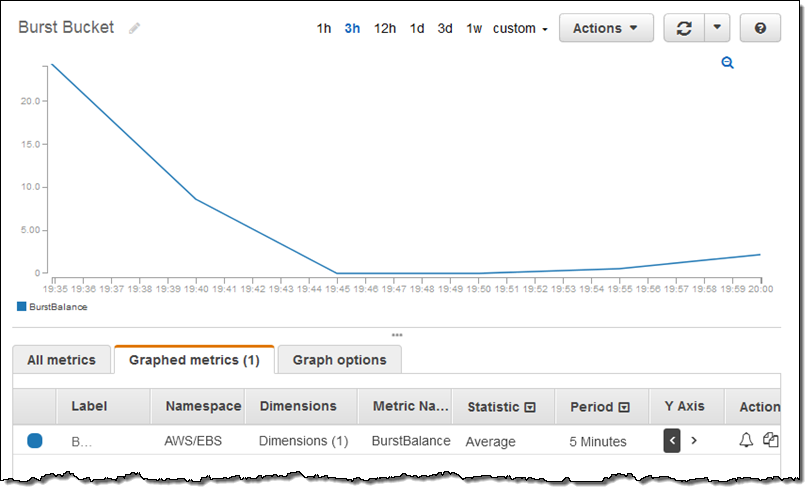 If you’re one of the few customers where your burst-bucket is depleting more than you’d like, you can either increase the size of your gp2 volume for more performance or transition to a Provisioned IOPS SSD (io1) volume, which delivers consistent, provisioned performance 99.9% of the time.

Available Now
This feature is available now and you can start using it today in all AWS Commercial Regions at no charge. The usual charges for CloudWatch Alarms will apply.

PS – If you are a developer, development manager, or a product manager and would like to build systems like this, check out the EBS Jobs page.