Data is ubiquitous in businesses today, and the volume and speed of incoming data are constantly increasing. To derive insights from data, it’s essential to deliver it to a data lake or a data store and analyze it. Real-time or near-real-time data delivery can be cost prohibitive, therefore an efficient architecture is key for processing, and becomes more essential with growing data volume and velocity.

In this post, we show you how to build a scalable producer and consumer application for Amazon Kinesis Data Streams running on AWS Fargate. Kinesis Data Streams is a fully managed and scalable data stream that enables you to ingest, buffer, and process data in real time. AWS Fargate is a serverless compute engine for containers that works with AWS container orchestration services like Amazon Elastic Container Service (Amazon ECS), which allows us to easily run, scale, and secure containerized applications.

The sample code for this post is available in a GitHub repo, which also includes an AWS CloudFormation template to get you started.

What is data streaming?

Before we look into the details of data streaming architectures, let’s get started with a brief overview of data streaming. Streaming data is data that is generated continuously by a large number of sources that transmit the data records simultaneously in small packages. You can use data streaming for many use cases, such as log processing, clickstream analysis, device geo-location, social media data processing, and financial trading.

This section gives a brief introduction to the solution’s architecture, as shown in the following diagram. 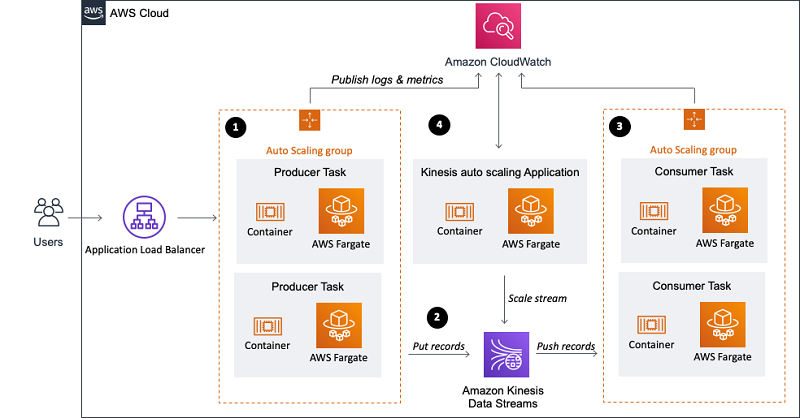 The architecture consists of four components:

For ingesting data into the data stream, you use the KPL, which aggregates, compresses, and batches data records to make the ingestion more efficient. In this architecture, the KPL increased the per-shard throughput up to 100 times, compared to ingesting the records with the PutRecord API (more on this in the Monitoring your stream and applications section). This is because the records are smaller than 1 KB each and the example code uses the KPL to buffer and send a collection of records in one HTTP request.

Not every use case is suited for using the KPL for ingestion. Due to batching and aggregation, the KPL has to buffer records, and therefore introduces some additional per-record latency. For a large number of small producers (such as mobile applications), you should use the PutRecords API to batch records or implement a proxy that handles aggregation and batching.

In this post, you set up a simple HTTP endpoint that receives data records and processes them using the KPL. The producer application runs in a Docker container, which is orchestrated by Amazon ECS on AWS Fargate. A target tracking scaling policy manages the number of parallel running data ingestion containers. It adjusts the number of running containers so you maintain an average CPU utilization of 65%.

The stream consists of one or more shards, which are uniquely identified sequences of data records in a stream. One shard has a maximum of 2 MB/s in reads (up to five transactions) and 1 MB/s writes per second (up to 1,000 records per second). Consumers with Dedicated Throughput (Enhanced Fan-Out) support up to 2 MB/s data egress per consumer and shard.

Each record written to Kinesis Data Streams has a partition key, which is used to group data by shard. In this example, the data stream starts with five shards. You use random generated partition keys for the records because records don’t have to be in a specific shard. Kinesis Data Streams assigns a sequence number to each data record, which is unique within the partition key. Sequence numbers generally increase over time so you can identify which record was written to the stream before or after another.

For the producer application, this example uses the KPL, which aggregates and batches records. For the consumer to be able to process these records, the application needs to deaggregate the records. To do this, you can use the KCL or the Kinesis Producer Library Deaggeragtion Modules for AWS Lambda (support for Java, Node.js, Python, and Go). The KCL is a Java library but also supports other languages via a MultiLangDaemon. The MultiLangDaemon uses STDIN and STDOUT to communicate with the record processor, so be aware of logging limitations. For this sample application, you use enhanced fan-out consumers with the KCL for Python 2.0.1.

Due to the STDOUT limitation, the record processor logs data records to a file that is written to the container logs and published to Amazon CloudWatch. If you create your own record processor, make sure it handles exceptions, otherwise records may be skipped.

The KCL creates an Amazon DynamoDB table to keep track of consumer progress. For example, if your stream has four shards and you have one producer instance, your instance runs a separate record processor for each shard. If the consumer scales to two instances, the KCL rebalances the record processor and runs two record processors on each instance. For more information, see Using the Kinesis Client Library.

A target tracking scaling policy manages the number of parallel running data processor containers. It adjusts the number of running containers to maintain an average CPU utilization of 65%.

The base layer of the container is Amazon Linux 2 with Python 3 and Java 8. Although you use KCL for Python, you need Java because the record processor communicates with the MultiLangDaemon of the KCL.

During the Docker image build, the Python library for the KCL (version 2.0.1 of amazon_kclpy) is installed, and the sample application (release 2.0.1) from the KCL for Python GitHub repo is cloned. This allows you to use helper tools (samples/amazon_kclpy_helper.py) so you can focus on developing the record processor. The KCL is configured via a properties file (record_processor.properties).

Logs written to a file (app/logs/record_processor.log) are attached to container logs by a subprocess that runs in the container entry point script (run.sh). The starting script also runs set_properties_py, which uses environment variables to set the AWS Region, stream name, and application name dynamically. If you want to also change other properties, you can extend this script.

The container gets its permissions (such as to read from Kinesis Data Streams and write to DynamoDB) by assuming the role ECSTaskConsumerRole01. This sample deployment uses 2 vCPU and 4 GB memory to run the container.

When changes in the rate of data flow occur, you may have to increase or decrease the capacity. With Kinesis Data Streams, you can have one or more hot shards as a result of unevenly distributed partition keys, very similar to a hot key in a database. This means that a certain shard receives more traffic than others, and if it’s overloaded, it produces a ProvisionedThroughputExceededException (enable detailed monitoring to see that metric on shard level).

You need to split these hot shards to increase throughput, and merge cold shards to increase efficiency. For this post, you use random partition keys (and therefore random shard assignment) for the records, so we don’t dive deeper into splitting and merging specific shards. Instead, we show how to increase and decrease throughput capacity for the whole stream. For more information about scaling on a shard level, see Strategies for Resharding.

For this walkthrough, you must have an AWS account.

In this post, we walk through the following steps:

The template launches in the US East (N. Virginia) Region by default. To launch it in a different Region, use the Region selector in the console navigation bar. The following Regions are supported:

Alternatively, you can download the CloudFormation template and deploy it manually. When asked to provide an IPv4 CIDR range, enter the CIDR range that can send records to your application. You can change it later on by adapting the security groups inbound rule for the Application Load Balancer.

You have several options to send records to Kinesis Data Streams. You can do it from the CLI or any API client that can send REST requests, or use a load testing solution like Distributed Load Testing on AWS or Artillery. With load testing, additional charges for requests occur; as a guideline, 10,000 requests per second for 10 minutes generate an AWS bill of less than $5.00. To do a POST request via curl, run the following command and replace ALB_ENDPOINT with the DNS record of your Application Load Balancer. You can find it on the CloudFormation stack’s Outputs tab. Ensure you have a JSON element “data”. Otherwise, the application can’t process the record.

Monitoring your stream and applications

This dashboard shows metrics for the producer, consumer, and stream. The metric Consumer Behind Latest gives you the offset between current time and when the last record was written to the stream. An increase in this metric means that your consumer application can’t keep up with the rate records are ingested. For more information, see Consumer Record Processing Falling Behind.

The dashboard also shows you the average CPU utilization for the consumer and producer applications, the number of PutRecords API calls to ingest data into Kinesis Data Streams, and how many user records are ingested.

Without using the KPL, you would see one PutRecord equals one user record, but in our architecture, you should see a significantly higher number of user records than PutRecords. The ratio between UserRecords and PutRecords operations strongly depends on KPL configuration parameters. For example, if you increase the value of RecordMaxBufferedTime, data records are buffered longer at the producer, more records can be aggregated, but the latency for ingestion is increased.

All three applications (including the Kinesis Data Streams scaler) publish logs to their respective log group (for example, ecs/kinesis-data-processor-producer) in CloudWatch. You can either check the CloudWatch logs of the Auto Scaling Application or the data stream metrics to see the scaling behavior of Kinesis Data Streams.

To avoid additional cost, ensure that the provisioned resources are decommissioned. To do that, delete the images in the Amazon Elastic Container Registry (Amazon ECR) repository, the CloudFormation stack, and any remaining resources that the CloudFormation stack didn’t automatically delete. Additionally, delete the DynamoDB table DataProcessorConsumer, which the KCL created.

Florian Mair is a Solutions Architect at AWS. He is a technologist that helps customers in Germany succeed and innovate by solving business challenges using AWS Cloud services. Besides working as a Solutions Architect, Florian is a passionate mountaineer, and has climbed some of the highest mountains across Europe.