Amazon Redshift is a fully managed, petabyte-scale data warehouse service in the cloud. With Amazon Redshift, you can analyze all your data to derive holistic insights about your business and your customers. One of the challenges with security is that enterprises don’t want to have a concentration of superuser privileges amongst a handful of users. Instead, enterprises want to design their overarching security posture based on the specific duties performed via roles and assign these elevated privilege roles to different users. By assigning different privileges to different roles and assigning these roles to different users, enterprises can have more granular control of elevated user access.

In this post, we explore the role-based access control (RBAC) features of Amazon Redshift and how you can use roles to simplify managing privileges required to your end-users. We also cover new system views and functions introduced alongside RBAC.

Overview of RBAC in Amazon Redshift

As a security best practice, it’s recommended to design security by applying the principle of least privileges. In Amazon Redshift, RBAC applies the same principle to users based on their specific work-related role requirements, regardless of the type of database objects involved. This granting of privileges is performed at a role level, without the need to grant permissions for the individual user or user groups. You have four system-defined roles to get started, and can create additional, more granular roles with privileges to run commands that used to require the superuser privilege. With RBAC, you can limit access to certain commands and assign roles to authorized users. And you can assign object-level as well as system-level privileges to roles across Amazon Redshift native objects.

Amazon Redshift provides four system-defined roles that come with specific privileges. These can’t be altered or customized, but you can create your own roles as required. The system-defined roles use the sys: prefix, and you can’t use this prefix for the roles you create.

The following table summarizes the roles and their privileges.

Amazon Redshift also adds support for system privileges that can be granted to a role or a user. A system privilege allows admins to grant a limited set of privileges to a user, such as the ability to create and alter users. These system-defined privileges are immutable and can’t be altered, removed, or added to.

You can use the Amazon Redshift commands for privileges to create role, grant role, revoke role, and the admin options for the grant and revoke. Only superusers or regular users who have been granted create role privileges can use those commands.

For this post, we use the industry standard TPC-H dataset to demonstrate our example use cases.

We have three different teams in the organization: Sales, Marketing, and Admin. For this example, we have two schemas, sales and marketing, in the Amazon Redshift database. Each schema has the following tables: nation, orders, part, partsupp, supplier, region, customer, and lineitem.

We have two different database roles, read-only and read/write, for both the Sales team and Marketing team individually. Each role can only perform operations to the objects belonging to the schema to which the role is assigned. For example, a role assigned to the sales schema can only perform operations based on assigned privileges to the sales schema, and can’t perform any operation on the marketing schema.

The read/write role has read and write (insert, update) access to the objects in the respective schema when the privileges are granted to the objects.

The Admin team has one role (db_admin), which has privileges to drop or create database roles, truncate tables, and analyze the entire database. The admin role can perform at the database level across both sales and marketing schemas.

Set up for the example use cases

All the queries for this post are run in the Amazon Redshift native Query Editor v2, but can be run just the same in any query editor, such as SQLWorkbench/J.

From this point forward, we use the dbadmin user credential for performing any of the following steps when no specific user is mentioned.

You can use the DDL available on the GitHub repo to create and populate the tables.

After the tables are created and populated, let’s move to the example use cases.

Sales analysts may want to get the list of suppliers with minimal cost. For this, the sales analyst only needs read-only access to the tables in the sales schema. 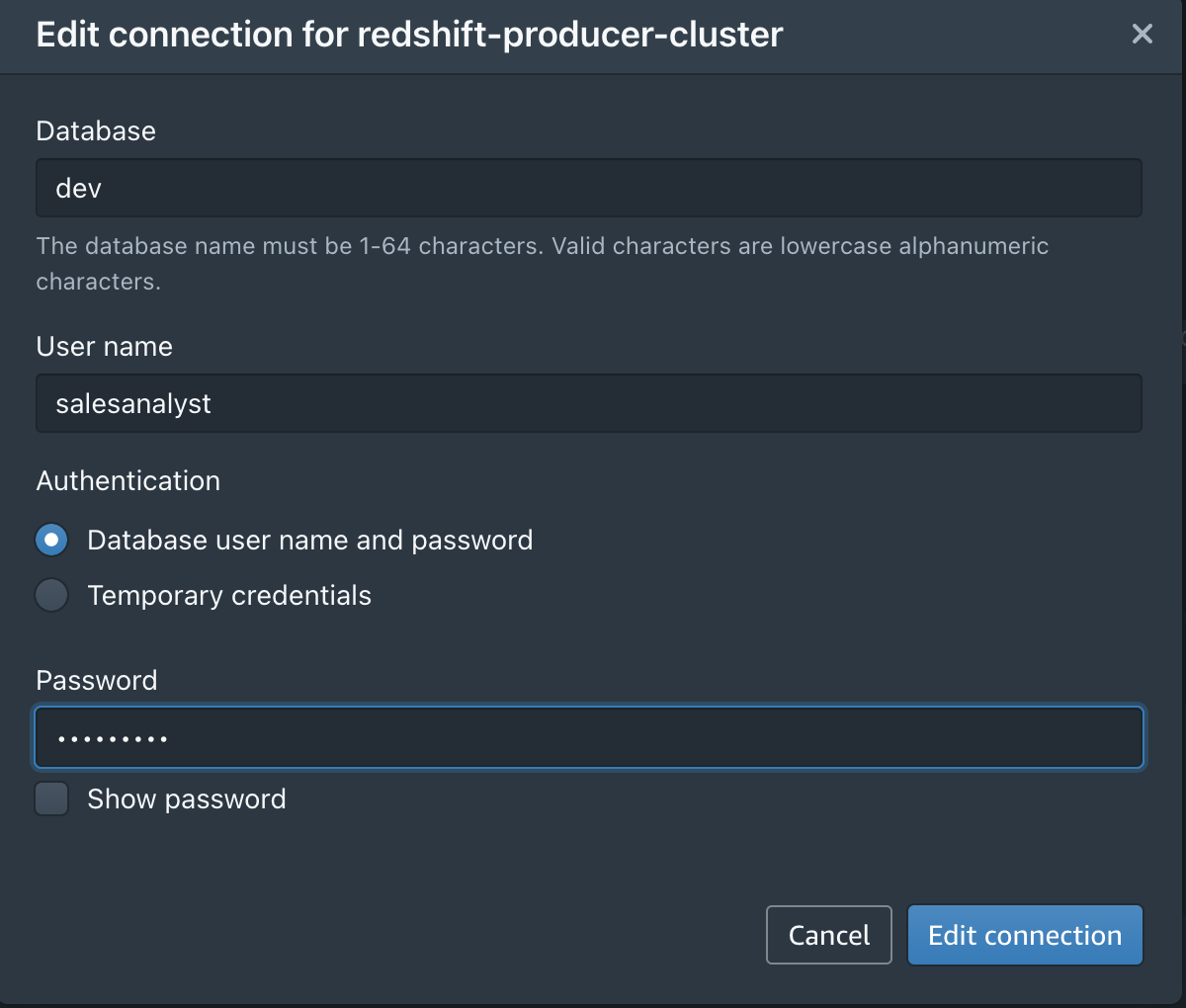 The salesanalyst user can generate a report of least-expensive suppliers using the following query:

The salesanalyst user can successfully read data from the region table of the sales schema.

In the following example, the salesanalyst user wants to update the comment for Region key 0 and Region name AFRICA in the region table. But the command fails with a permission denied error because they only have select permission on the region table in the sales schema.

The salesanalyst user also wants to access objects from the marketing schema, but the command fails with a permission denied error.

In this example, the sales engineer who is responsible for building the extract, transform, and load (ETL) pipeline for data processing in the sales schema is given read and write access to perform their tasks. For these steps, we use the dbadmin user unless otherwise mentioned. 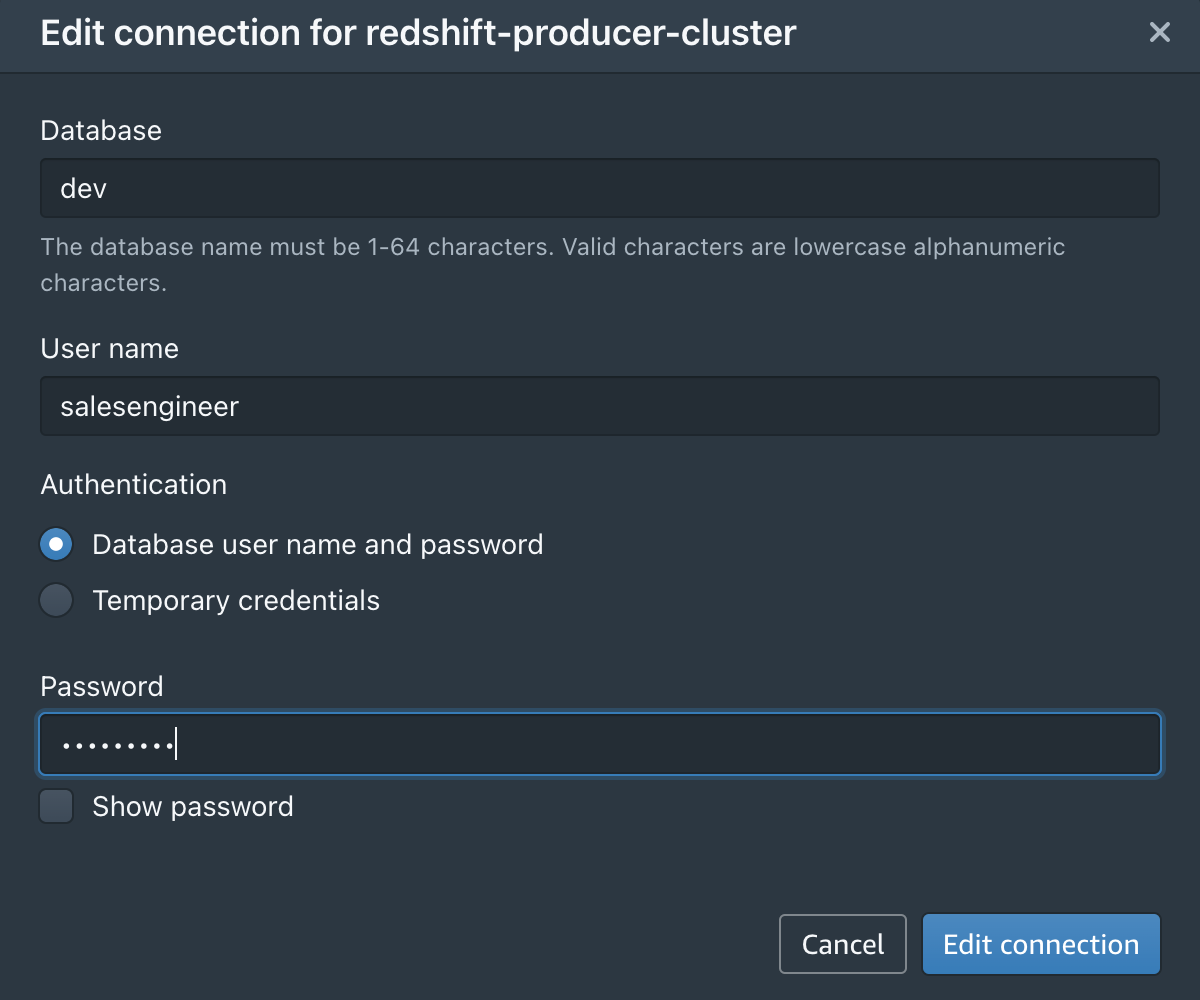 The salesengineer user can successfully read data from the region table of the sales schema.

However, they can’t read tables from the marketing schema because the salesengineer user doesn’t have permission.

The salesengineer user then tries to update the region table in the sales schema but fails to do so.

The salesengineer user then retries to update the region table in the sales schema and is able to do so successfully.

When they read the data, it shows that the comment was updated for Region key 0 (for AFRICA) in the region table in the sales schema.

Now salesengineer wants to analyze the region table since it was updated. However, they can’t do so, because this user doesn’t have the necessary privileges and isn’t the owner of the region table in the sales schema.

Finally, the salesengineer user wants to vacuum the region table since it was updated. However, they can’t do so because they don’t have the necessary privileges and aren’t the owner of the region table.

Similarly, Amazon Redshift continuously monitors your database and automatically performs analyze operations in the background. In some situations, such as a major one-off data load, the database administrator may want to perform maintenance on objects in the sales and marketing schemas immediately. They access the database using dbadmin credentials to perform these tasks. 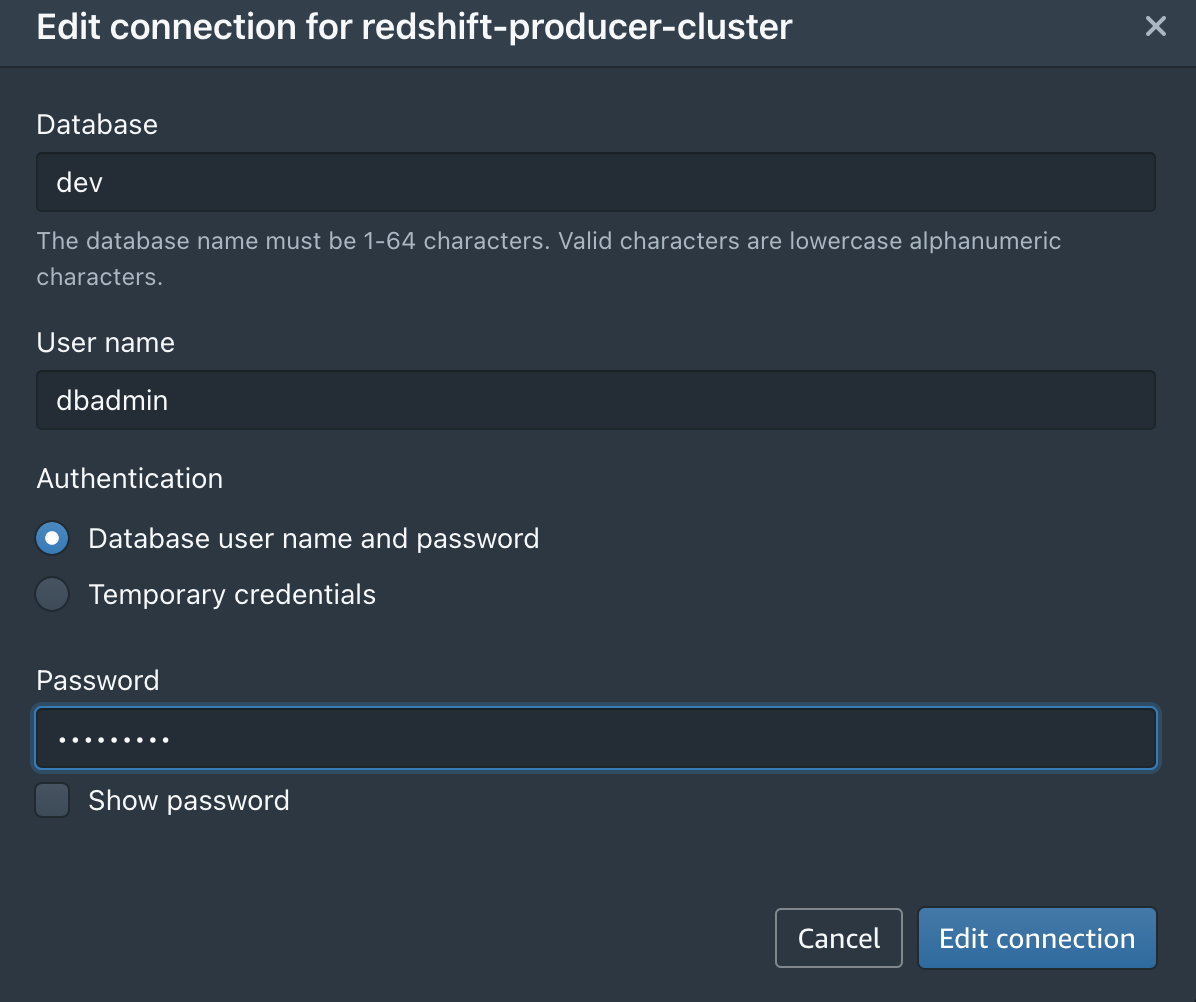 The dbadmin database user can access the Amazon Redshift database using their credentials to perform analyze and vacuum of the region table in the sales schema.

Now the dbadmin database user accesses the Amazon Redshift database to perform analyze and vacuum of the region table in the marketing schema.

The dbadmin database user can access the Amazon Redshift database to provide truncate table privileges to the sales_rw role.

Now the salesengineer can perform a truncate on the region table in the sales schema successfully.

First, they read the data:

Then they perform the truncate:

They read the data again to see the changes:

The role_is_member_of function returns true if the role is a member of another role. Superusers can check all roles memberships; regular users can only check roles to which they have access. You receive an error if the provided roles don’t exist or the current user doesn’t have access to them. The following two role memberships are checked using the salesengineer user credentials:

The user_is_member_of function returns true if the user is a member of the specified role or group. Superusers can check all user memberships; regular users can only check their own membership. You receive an error if the provided identities don’t exist or the current user doesn’t have access to them. The following user membership is checked using the salesengineer user credentials, and fails because salesengineer doesn’t have access to salesanalyst:

When the same user membership is checked using the superuser credential, it returns a result:

When salesengineer checks their own user membership, it returns the correct results:

Amazon Redshift has added several new views to be able to view the roles, the assignment of roles to users, the role hierarchy, and the privileges for database objects via roles. These views are available to superusers as well as regular users. Superusers can check all role details, whereas regular users can only check details for roles that they have been granted access to.

In this post, we demonstrated how you can use role-based access control to further fortify your security posture by granularizing privileged access across users without needing to centralize superuser privileges in your Amazon Redshift cluster. Try out using database roles for your future Amazon Redshift implementations, and feel free to leave a comment about your experience.

In the future posts, we will show how these roles also integrate tightly with workload management. You can use them when defining WLM queues, and also while implementing single sign-on via identity federation with Microsoft Active Directory or a standards-based identity provider, such as Okta Universal Directory or Azure AD and other SAML-based applications.

Milind Oke is a Data Warehouse Specialist Solutions Architect based out of New York. He has been building data warehouse solutions for over 15 years and specializes in Amazon Redshift.

Debu Panda is a Senior Manager, Product Management with AWS. He is an industry leader in analytics, application platform, and database technologies, and has more than 25 years of experience in the IT world. Debu has published numerous articles on analytics, enterprise Java, and databases and has presented at multiple conferences such as re:Invent, Oracle Open World, and Java One. He is lead author of the EJB 3 in Action (Manning Publications 2007, 2014) and Middleware Management (Packt).

Huiyuan Wang is a software development engineer of Amazon Redshift. She has been working on MPP databases for over 6 years and has focused on query processing, optimization and metadata security.