Getting started with the A1 instance

At re:Invent 2018 AWS announced the Amazon EC2 A1 instance. These instances are based on the AWS Nitro System that powers all of our latest generation of instances, and are the first instance types powered by the AWS Graviton Processor. These processors feature 64-bit Arm Neoverse cores and are the first general-purpose processor design by Amazon specifically for use in AWS. The instances are up to 40% less expensive than the same number of vCPUs and DRAM available in other instance types. A1 instances are currently available in the US East (N. Virginia and Ohio), US West (Oregon) and EU (Ireland) regions with the following configurations:

For further information about the instance itself, developers can watch this re:Invent talk and visit the A1 product details page.

Since introduction, we’ve been expanding the available operating systems for the instance and working with the Arm software ecosystem. This blog will provide a summary of what’s supported and how to use it.

If you’re running on an open source stack, as many customers who build applications that scale-out in the cloud are, the Arm ecosystem is well developed and likely already supports your application.

The A1 instance requires AMIs and software built for Arm processors. When we announced A1, we had support for Amazon Linux 2, Ubuntu 16.04 and 18.04, as well as Red Hat Enterprise Linux 7.6. A little over two months later and the available operating systems for our customers has increased to include Red Hat Enterprise Linux 8.0 Beta, NetBSD, Fedora Rawhide, Ubuntu 18.10, and Debian 9.8. We expect to see more operating systems, linux distributions and AMIs available in the coming months.

These operating systems and Linux distributions are offering the same level of support for their Arm AMIs as they do for their existing x86 AMIs. In almost every case, if you’re installing packages with aptor yum those packages exist for Arm in the OS of your choice and will run in the same way.

For example, to install PHP 7.2 on the Arm version of Amazon Linux 2 or Ubuntu we follow the exact same steps we would on an x86 based instance type:

Containers are one of the most popular application deployment mechanisms for A1. The Elastic Container Service (ECS) already supports the A1 instance and there’s an Amazon ECS-Optimized Amazon Linux 2 AMI, and we’ll soon be launching support for Elastic Kubernetes Service (EKS). The majority of Docker official-images hosted in Docker Hub already have support for 64-bit Arm systems along with x86.

We’ve further expanded support for running containers at scale with AWS Batch support for A1.

Running a container on A1

In this section we show how to run the container on Amazon Linux 2. Many Docker official images (at least 76% as of this writing) already support 64-bit Arm systems, and the majority of the ones that don’t either have pending patches to add support or are based on commercial software

Running WordPress on A1

As an example of automating the running of a LAMP (Linux, Apache HTTPd, MariaDB, and PHP) stack on an A1 instance, we’ve updated a basic CloudFormation template to support the A1 instance type. We made some changes to the template to support Amazon Linux 2, but otherwise the same template works for all our instance types. The template is here and it can be launched like any other CloudFormation template.

It defaults to running on an A1 Arm instance. After the template is launched, the output is the URL of the running instance which can be accessed from a browser to observe the default WordPress home page is being served. 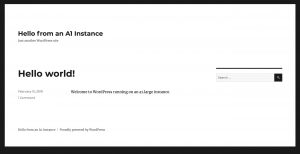 If you’re using open source software, everything you rely on most likely works on Arm systems today, and over the coming months we’ll be working on increasing the support and improving performance of software running on the A1 instances. If you have an open source based web-tier or containerized application, give the A1 instances a try and let us know what you think. If you run into any issues please don’t hesitate to get in touch at ec2-arm-dev-feedback@amazon.com , via the AWS Compute Forum, or reach out through your usual AWS support contacts, we love customer’s feedback.