NOTE: On May 23 we announced an update to the timeframe seen below.

AWS Lambda was first announced at AWS re:Invent 2014. Amazon CTO Werner Vogels highlighted the aspect of needing to run no servers, no instances, nothing, you just write your code. In 2016, we announced the launch of Lambda@Edge, which lets you run Lambda functions to customize content that CloudFront delivers, executing the functions in AWS locations closer to the viewer.

At AWS, we talk often about “shared responsibility” models. Essentially, those are the places where there is a handoff between what we as a technology provider offer you and what you as the customer are responsible for. In the case of Lambda and Lambda@Edge, one of the key things that we manage is the “execution environment.” The execution environment is what your code runs inside of. It is composed of the underlying operating system, system packages, the runtime for your language (if a managed one), and common capabilities like environment variables. From the customer standpoint, your primary responsibility is for your application code and configuration.

In this post, we outline an upcoming change to the execution environment for Lambda and Lambda@Edge functions for all runtimes with the exception of Node.js v10. As with any update, some functionality could be affected. We encourage you to read through this post to understand the changes and any actions that you might need to take.

AWS Lambda and AWS Lambda@Edge run on top of the Amazon Linux operating system distribution and maintain updates to both the core OS and managed language runtimes. We are updating the Lambda execution environment AMI to version 2018.03 of Amazon Linux. This newer AMI brings updates that offer improvements in capabilities, performance, security, and updated packages that your application code might interface with.

This does not apply to the recently announced Node.js v10 runtime which today runs on Amazon Linux 2.

The majority of functions will benefit seamlessly from the enhancements in this update without any action from you. However, in rare cases, package updates may introduce compatibility issues. Potential impacted functions may be those that contain libraries or application code compiled against specific underlying OS packages or other system libraries. If you are primarily using an AWS SDK or the AWS X-Ray SDK with no other dependencies, you will see no impact.

You have the following options in terms of next steps:

In addition to the overall timeline for this change, this post also provides instructions on the following:

The following is the timeline for the update, which is broken up over five phases: 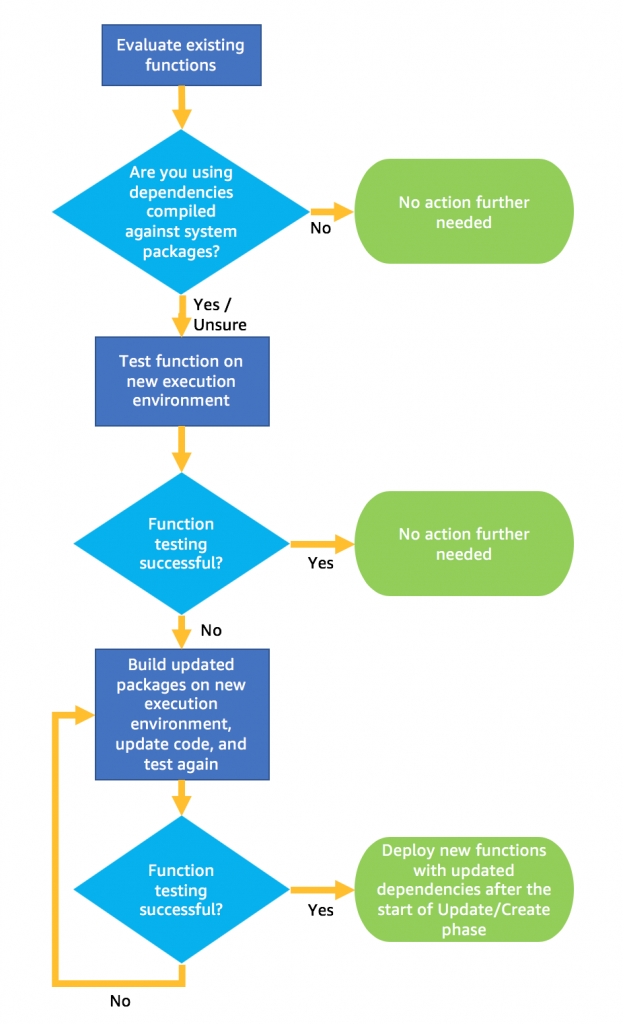 You only have to act if your application uses dependencies that are compiled to work on the previous execution environment. Otherwise, you can continue to deploy new and updated Lambda functions without needing to perform any other testing steps. For those who aren’t sure if their functions use such dependencies, we encourage you to do a new deployment of your functions and to test their functionality.

There are two options for when you can start testing your functions on the new execution environment:

Building your dependencies and application for the new execution environment

Because we are basing the environment off of an existing Amazon Linux AMI, you can start with building and testing your code against that AMI on EC2. With an updated EC2 instance running this AMI, you can compile and build your packages using your normal processes. For the list of AMI IDs in all public Regions, check the release notes. To start an EC2 instance running this AMI, follow the steps in the Launching an Instance Using the Launch Instance Wizard topic in the Amazon EC2 User Guide.

Some of you may want to begin testing as soon as you’ve read this announcement. Some know that they should postpone until later in the timeline.

To give you some control over testing, we’re releasing two special Lambda layers. Lambda layers can be used to provide shared resources, code, or data between Lambda functions and can simplify the deployment and update process. These layers don’t actually contain any data or code. Instead, they act as a special flag to Lambda to run your function executions either specifically on the new or old execution environment.

The Opt-In layer allows you to start testing today. You can use the Delayed-Update layer when aren’t ready to deploy to the new execution environment, but you know that you need to create new functions or make updates to your existing functions or their configuration after June 11. The Delayed-Update layer extends the initial period available to you to deploy your functions by one week until the end of July 22, without changing the execution environment.

Neither layer brings any performance or runtime changes beyond this. After July 22, the layers will have no functionality. In a future deployment, you should remove them from any function configurations.

The ARNs for the two scenarios:

The action for adding a layer to your existing functions requires an update to the Lambda function’s configuration. You can do this with the AWS CLI, AWS CloudFormation or AWS SAM, popular third-party frameworks, the AWS Management Console, or an AWS SDK.

There are several ways for you to test your function code and assure that it will work after the execution environment has been updated.

With the AWS SAM CLI, you can pass in valid test payloads that interface with data in other AWS services. You can also have your Lambda function talk to other AWS resources that exist in your account, for example Amazon DynamoDB tables, Amazon S3 buckets, and so on. You could also test an API interface using the local start-api command, provided that you have configured your AWS SAM template with events of the API type. Follow the full instructions for setting up and configuring the AWS SAM CLI in Installing the AWS SAM CLI. Find the full syntax guide for AWS SAM templates in the AWS Serverless Application Model documentation.

Testing in the Lambda console

After you have deployed your functions after the start of the Update/Create phase or with the Opt-In layer added, test your functions in the Lambda console.

The results from the test are displayed.

With Lambda and Lambda@Edge, AWS has allowed developers to focus on just application code without the need to think about the work involved managing the actual servers that run the code. We believe that the mechanisms provided and processes described in this post allow you to easily test and update your functions for this new execution environment.

Some of you may have questions about this process, and we are ready to help you. Please contact us through AWS Support, the AWS forums, or AWS account teams.