AWS App Runner, introduced in 2021, is a fully managed service for running web applications and API servers. App Runner greatly simplifies the experience to build and run secure web server applications with little to no infrastructure in your account. You provide the source code or a container image, and App Runner will build and deploy your application containers in the AWS Cloud, automatically scaling and load-balancing requests across them behind the scenes. All you see is a service URL against which HTTPS requests can be made.

Yesterday, AWS announced VPC support for App Runner services. Until the launch of this feature, applications hosted on App Runner could only connect to public endpoints on the internet. With this new capability, applications can now connect to private resources in your VPC, such as an Amazon RDS database, Amazon ElastiCache cluster, or other private services hosted in your VPC. This blog post takes you behind the scenes of App Runner to detail the network connection between your App Runner hosted application and your VPC, specifically the network interfaces created in your VPC and the traffic flows that are expected to flow over them.

Before we dive into the details of VPC access, let us first understand the inner workings of App Runner in the default public networking mode that existed prior to the launch of this feature.

When you create a service, behind the scenes, App Runner deploys your application containers as AWS Fargate tasks orchestrated by Amazon Elastic Container Service in an App Runner-owned VPC. Within the App Runner VPC, is an internet-facing network load balancer that receives incoming requests and a layer-7 request router that forwards the request to an appropriate Fargate task. The Fargate tasks themselves are hosted in Firecracker microVMs running in a Fargate-owned VPC. The tasks are launched with awsvpc networking mode and are cross-connected to the App Runner VPC. This means that each Fargate task is attached to an elastic network interface (ENI) in the App Runner VPC, which we call the primary ENI of the task. The request router addresses each task privately via its primary ENI’s private IP address. In fact, the ENI is bi-directional, and all network traffic to and from the task traverses through it. There are four distinct flows of traffic:

As you can see, in the public networking mode, all traffic flows are supported entirely behind the scenes through the App Runner VPC. As a customer, you don’t need to provision a VPC or any networking resources in your account in order to deploy an application that only requires outbound internet access and no VPC access. 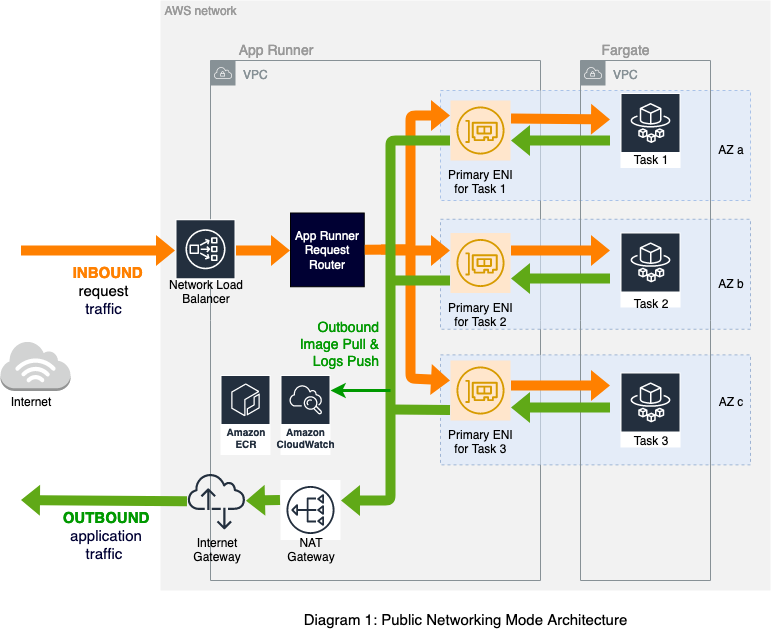 However, many applications operate in an ecosystem of private resources and require access to a customer-owned VPC. In the following sections, we will walk through how we enabled this capability on the existing architecture.

In order to deploy an application on App Runner that has outbound access to a VPC, you must first create a VPCConnector by specifying one or more subnets and security groups to associate with the application. You can then reference the VPCConnector in the Create/UpdateService via the CLI as follows:

The Fargate tasks spun up behind the scenes are evenly spread across the zones that map to the VPCConnector subnets. We recommend selecting subnets across at least three Availability Zones (or all supported Availability Zones if the Region has less than three zones) for high availability. 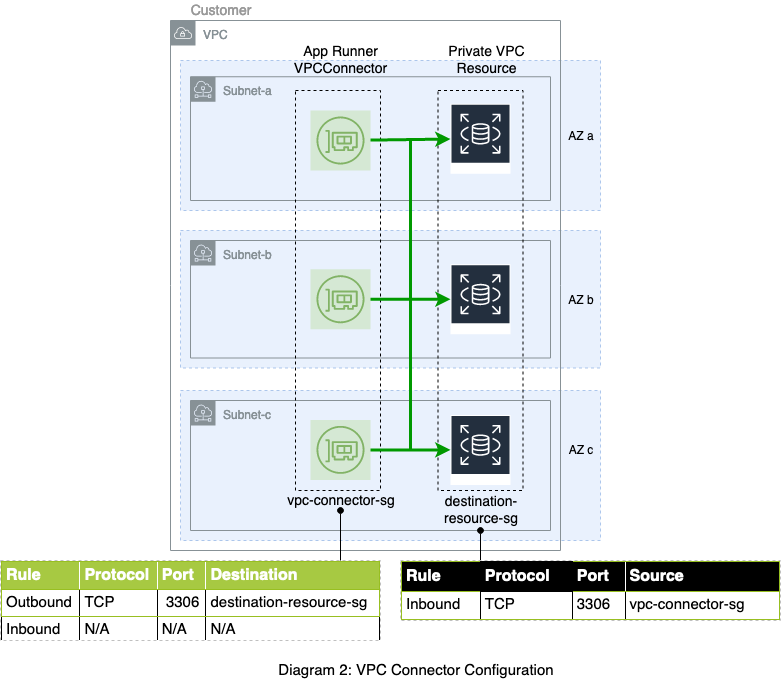 VPC Networking Mode Under the Hood

Now let’s go back under the hood to understand how the connection is established between your VPC and your application containers running within the Fargate VPC. The technology we use for this is AWS Hyperplane. AWS Hyperplane is an internal service that has been powering many AWS networking offerings. Specifically, it has supported inter-VPC connectivity for AWS Private Link and AWS Lambda VPC networking, and it is a perfect fit for our use case of establishing a connection between your VPC and the Fargate VPC that hosts the application tasks. More about why we chose Hyperplane in the next section, but first, let’s understand the architecture of the VPC networking mode.

When you create a VPCConnector and associate it with a service, a special type of ENI, referred to as a Hyperplane ENI, is created in your subnet(s). A similar Hyperplane ENI exists in the Fargate subnet that hosts the task microVM. When a task is launched, a tunnel is established between the two Hyperplane ENIs, thus creating a VPC-to-VPC connection.

A Hyperplane ENI created in your VPC looks very similar to a regular ENI, in that it will be allocated a private IP address from the subnet’s CIDR range. However, there are a few key differences to note. Hyperplane ENIs are managed network resources whose lifecycle is controlled by App Runner. While you can view the ENI and access its flow logs, you cannot detach or delete the ENI. Another distinguishing factor about the Hyperplane ENI is that it is unidirectional and only supports outbound traffic initiated by the application. Thus, you cannot send any inbound requests to the Hyperplane ENI’s IP address. Incoming requests to your application will continue to come through the service URL. In fact, let us re-examine all the traffic flows in this new set-up: 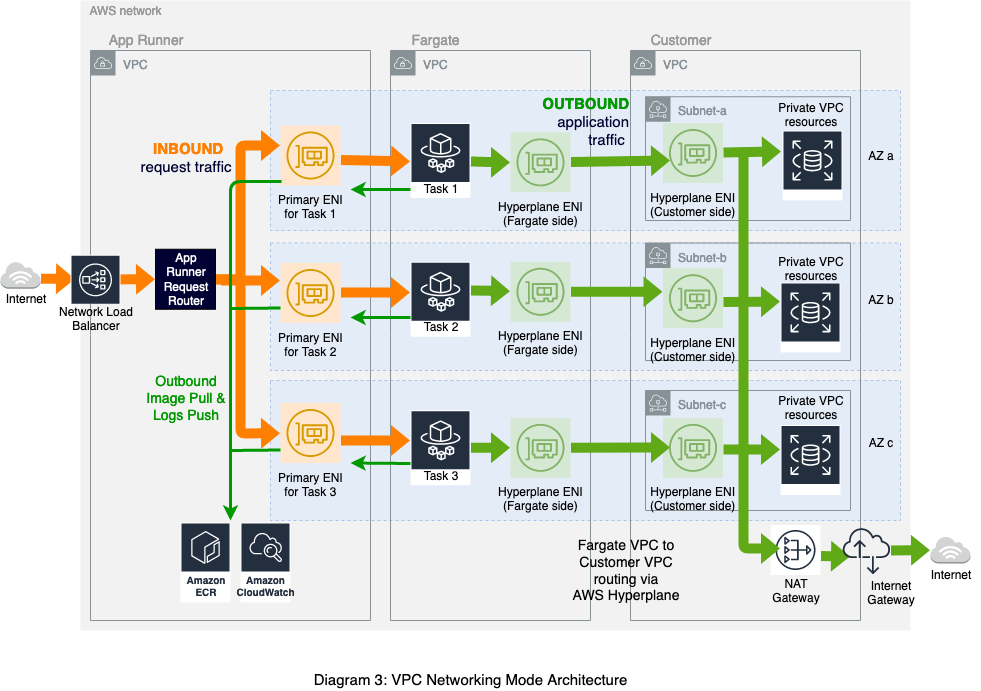 The previous diagram (Diagram 3) shows a simplified view of only one Fargate task per subnet and Hyperplane ENI. However, the benefits of Hyperplane are most visible when your service is scaled up, as shown in Diagram 4. Although there is a one-to-one relationship between a Fargate task and its primary ENI in App Runner VPC (which is a regular ENI), there is only one Hyperplane ENI per subnet in the customer VPC. All Fargate tasks within that availability zone send traffic through the same shared ENI in your VPC. 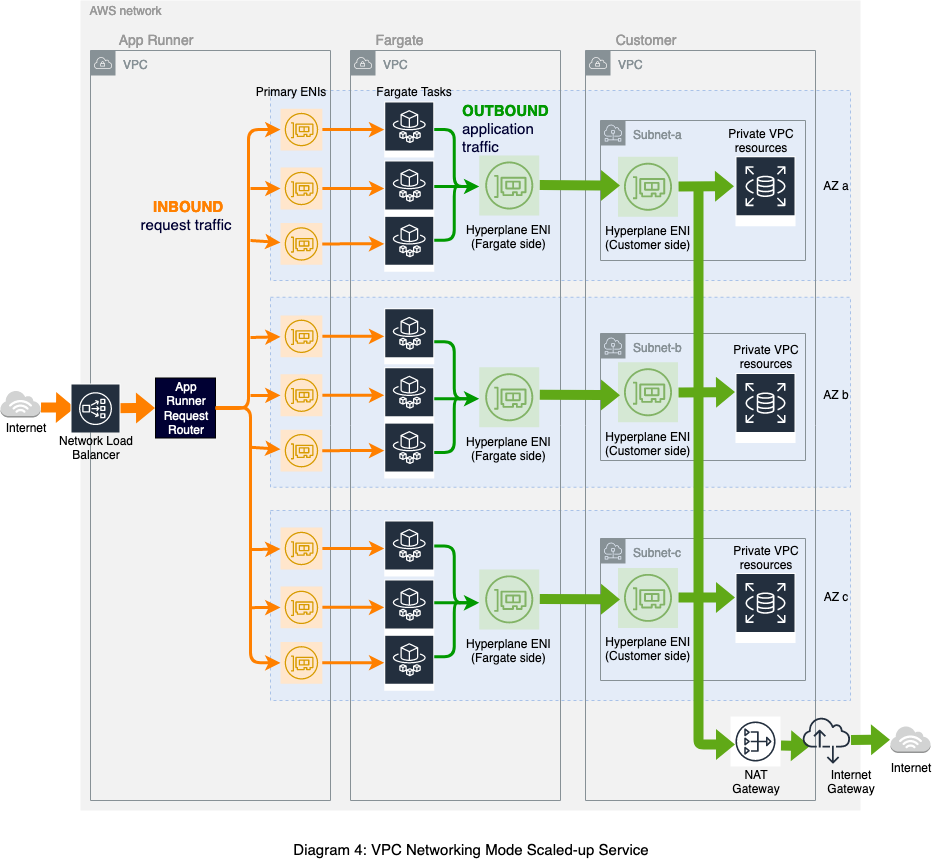 This architecture has a few benefits for you:

We’re excited to bring you this capability that allows App Runner applications to connect to private resources in your VPC using the power and scalability of AWS Hyperplane. This has been one of the most heavily requested features for this service, and we look forward to hearing your feedback on the App Runner roadmap on GitHub. To get started, check out our blog post which walks you through the setup of an example web application that connects to a private RDS database using this feature.