Update – November 28, 2019: We have fully rolled out the changes to the following additional Region to those mentioned below: Middle East (Bahrain).

Update – November 25, 2019: We have fully rolled out the changes to the following additional Regions to those mentioned below: US East (N. Virginia), US West (Oregon), Canada (Central), EU (London), EU (Stockholm), and Asia Pacific (Hong Kong). All AWS accounts in these Regions will see the improvements outlined in the original post.

Update – November 6, 2019: We have fully rolled out the changes to the following additional Regions to those mentioned below: US West (N. California), EU (Ireland), EU (Paris), Asia Pacific (Mumbai), Asia Pacific (Seoul), Asia Pacific (Singapore), Asia Pacific (Sydney), and South America (San Paulo). All AWS accounts in these Regions will see the improvements outlined in the original post.

Update – September 27, 2019: We have fully rolled out the changes to the following Regions: US East (Ohio), EU (Frankfurt), and Asia Pacific (Tokyo). All AWS accounts in these Regions will see the improvements outlined in the original post.

Known Issues (updated October 4, 2019): If you use HashiCorp Terraform, VPC resources, such as subnets, security groups, and VPCs, can fail to be destroyed due to the change in how ENIs work in this new model. You can find the steps to take to resolve this, as well as more information here.

We’re excited to announce a major improvement to how AWS Lambda functions work with your Amazon VPC networks. With today’s launch, you will see dramatic improvements to function startup performance and more efficient usage of elastic network interfaces. These improvements are rolling out to all existing and new VPC functions, at no additional cost. Roll out begins today and continues gradually over the next couple of months across all Regions.

Lambda first supported VPCs in February 2016, allowing you to access resources in your VPCs or on-premises systems using an AWS Direct Connect link. Since then, we’ve seen customers widely use VPC connectivity to access many different services:

Today’s launch brings enhancements to how this connectivity between Lambda and your VPCs works.

It helps to understand some basics about the way that networking with Lambda works. Today, all of the compute infrastructure for Lambda runs inside of VPCs owned by the service. 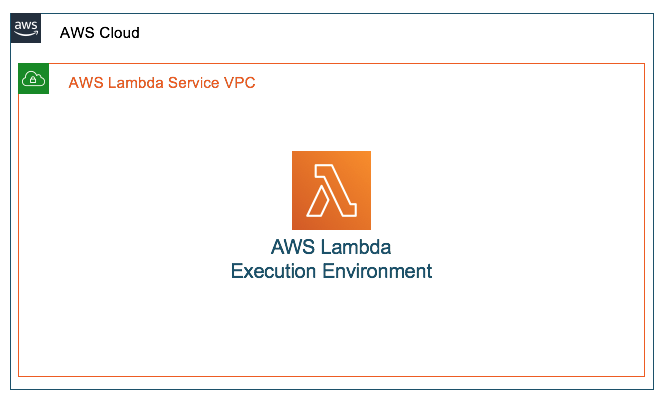 When you invoke a Lambda function from any invocation source and with any execution model (synchronous, asynchronous, or poll based), it occurs through the Lambda API. There is no direct network access to the execution environment where your functions run:

All invocations for functions continue to come from the Lambda service’s API and you still do not have direct network access to the execution environment. The attached network interface exists inside of your account and counts towards limits that exist in your account for that Region. 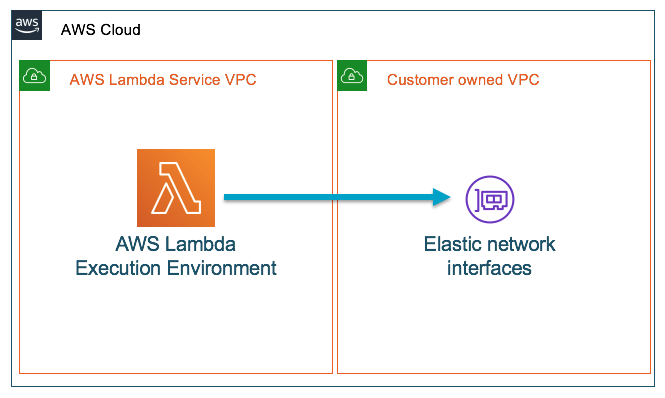 With this model, there are a number of challenges that you might face. The time taken to create and attach new network interfaces can cause longer cold-starts, increasing the time it takes to spin up a new execution environment before your code can be invoked. 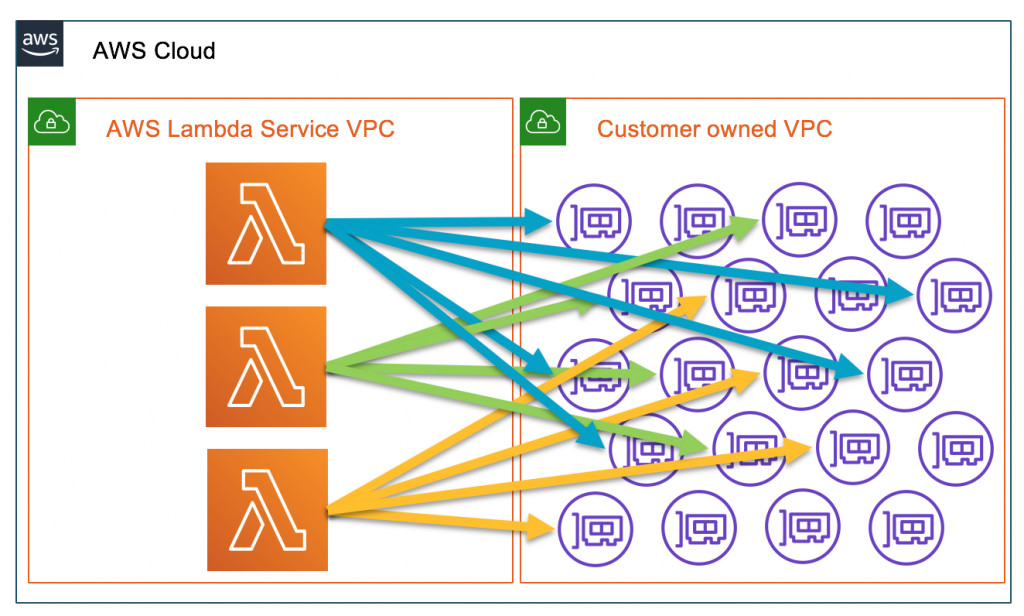 Every network interface created for your function is associated with and consumes an IP address in your VPC subnets. It counts towards your account level maximum limit of network interfaces.

As your function scales, you have to be mindful of several issues:

Starting today, we’re changing the way that your functions connect to your VPCs. AWS Hyperplane, the Network Function Virtualization platform used for Network Load Balancer and NAT Gateway, has supported inter-VPC connectivity for offerings like AWS PrivateLink, and we are now leveraging Hyperplane to provide NAT capabilities from the Lambda VPC to customer VPCs.

The Hyperplane ENI is a managed network resource that the Lambda service controls, allowing multiple execution environments to securely access resources inside of VPCs in your account. Instead of the previous solution of mapping network interfaces in your VPC directly to Lambda execution environments, network interfaces in your VPC are mapped to the Hyperplane ENI and the functions connect using it. 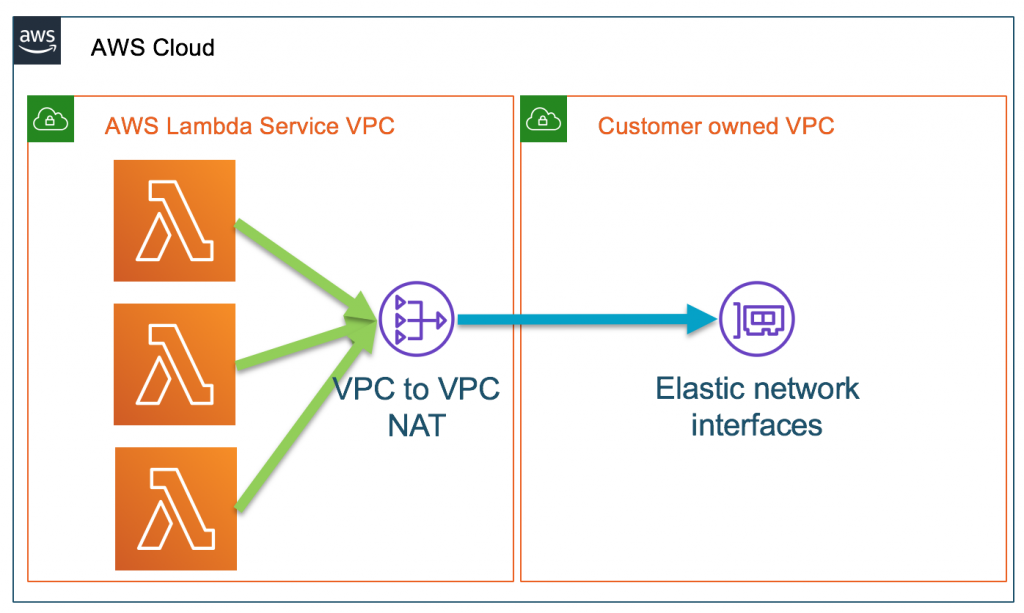 Hyperplane still uses a cross account attached network interface that exists in your VPC, but in a greatly improved way:

Several things do not change in this new model:

As I mentioned earlier, you don’t have to enable this new capability yourself, and there are no new associated costs. Starting today, we are gradually rolling this out across all AWS Regions over the next couple of months. We will update this post on a Region by Region basis after the rollout has completed in a given Region.

If you have existing VPC-configured Lambda workloads, you will soon see your applications scale and respond to new invocations more quickly. You can see this change using monitoring and profiling tools for Lambda like AWS X-Ray or those from APN Partners.

The first shows a function that was launched in a VPC, with a full cold start with network interface creation at invocation.

In this second image, you see the same function executed but this time in an account that has the new VPC networking capability. You can see the massive difference that this has made in function execution duration, with it dropping to 933 ms from 14.8 seconds!

On the AWS Lambda team, we consider “Simplicity” a core tenet to how we think about building services for our customers. We’re constantly evaluating ways that we can improve and simplify the experience that you see in building serverless applications with Lambda. These changes in how we connect with your VPCs improve the performance and scale for your Lambda functions. They enable you to harness the full power of serverless architectures.