In the context of Amazon EKS adoption, threats can be grouped at two levels: Kubernetes API server and node components, and workloads on top. Customers can and should implement automatic compliance checks at the early stages of the Software Development Life Cycle (SDLC), i.e. shift-left and DevOps mode. For the infrastructure level, by utilizing EKS and other AWS services combined with infrastructure code analysis tools, such as Cloudformation Guard, customers can implement the automatic guardrail checks. Then for the Kubernetes workload level, we can also automate security compliance checks to ensure Kubernetes manifests are compliant with enterprise security control policies before they pass through the CI/CD pipelines. 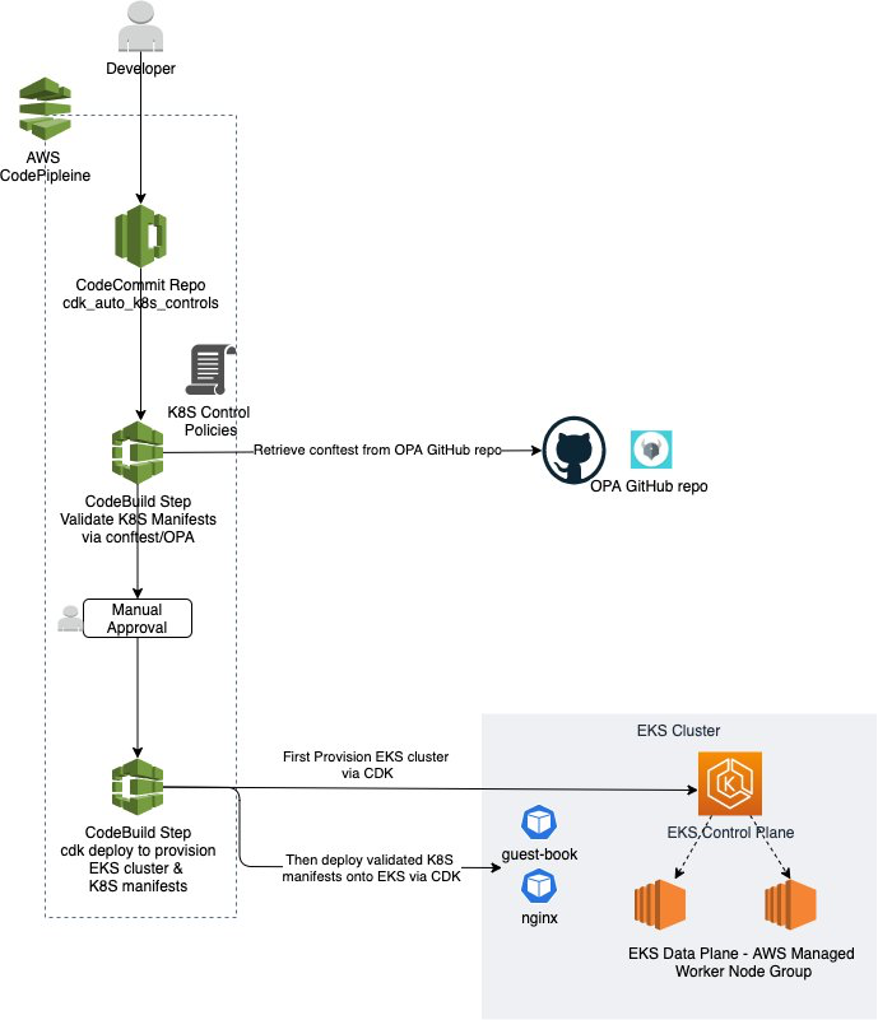 This post provides an E2E solution to codify and automate Kubernetes preventative controls in CI/CD pipeline. The whole solution is codified as AWS CDK codes in Typescript, so it can be easily reused or embedded into customers’ existing CDK library.

In this post, we have demonstrated two policies codified in Rego as examples to check Kubernetes manifest files. Although Conftest itself does not carry any built-in REPO policies, but customers can refer to various OPA Rego policy libraries provided by the OPA open-source community. For example, this library provides OPA Rego policies to check common Kubernetes security best practices and implement controls equivalent to Kubernetes Pod Security Policies (PSP). Additionally, this library provides OPA Rego policies to check Kubernetes security settings against the CIS Kubernetes Benchmark. Note that in addition to providing security suggestions on Kubernetes workload manifests, the CIS Kubernetes Benchmark also suggests on Kubernetes control plane and data plane settings, which can be checked by kube-bench and is beyond the scope of this article. Also, customers can develop custom Rego policies according to their own security requirements by leveraging community-provided policies as templates.

At a high level, the steps to deploy and validate the solution include:

To deploy this stack, you would need:

Now let the game begin! Execute the following steps to deploy the pipeline to your AWS account.

By now, we have successfully provisioned a CI/CD pipeline with embedded Kubernetes preventative control policies. Let’s validate it. Log onto the AWS Management Console and go to the CodePipeline service page, you should see a pipeline named EksDeployPipeline as shown below: 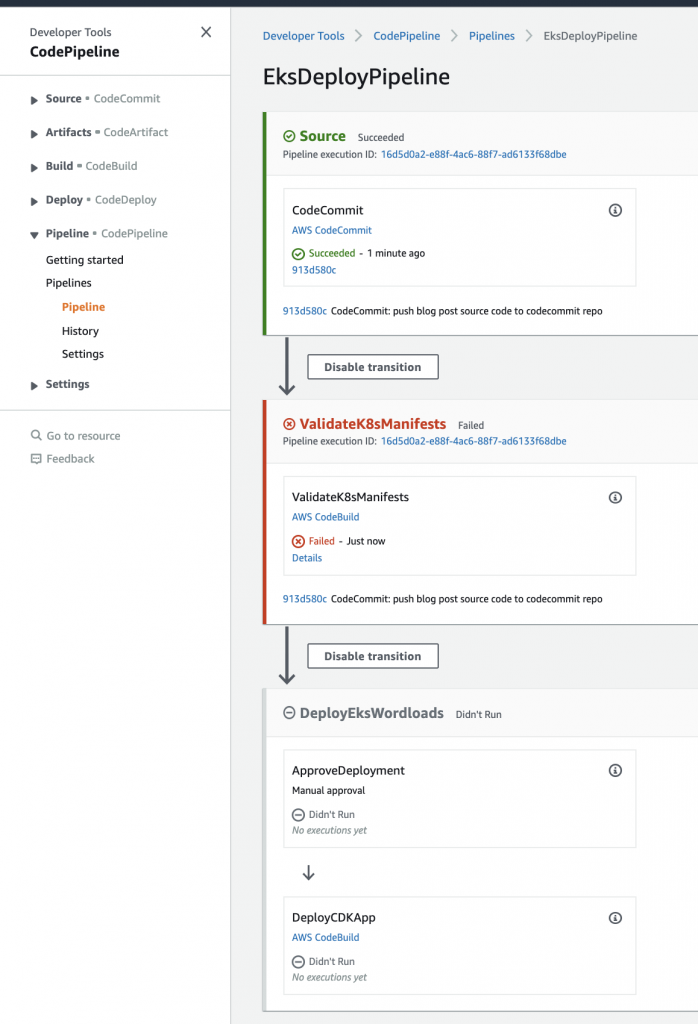 This simple pipeline has three stages:

However, we can see the first pipeline run is stopped due the failure at the second step. Let’s click the “Details” link in the ValidateK8sManifests step to check it out.

First, we can find in the PRE_BUILD phase, the CodeBuild step download the Conftest binary to the conftest/bin directory as shown below:

In order to deploy the Kubernetes manifests, we need to fix those non-compliant issues first. According to the messages in the screenshot above, on your development terminal, you should fix the issues with k8s-manifests/guestbook-all-in-one.yaml and k8s-manifests/guestbook-all-in-one.yaml, then push the changes to the CodeCommit repo to trigger the rerun of the pipeline.

Now in CodePipeline in the AWS Management Console, you should see the pipeline is triggered again. And in this run, the validation step should succeed as shown below:

Click the “Review” button in the ApproveDeployment step and approve the deployment (we have purposely added this step in our solution, however you can remove it from the pipeline setting if you prefer fully automatic deployment). Then the last step of “DeployCDKApp” should start to provision the EKS cluster and deploy the Kubernetes manifest files on top of the ESK cluster. It will take around 15 to 20 minutes; the vast majority of that time is spent on EKS cluster provisioning. Enough time for a coffee, or two!

When you come back, you should see the step of “DeployCDKApp” succeeds. 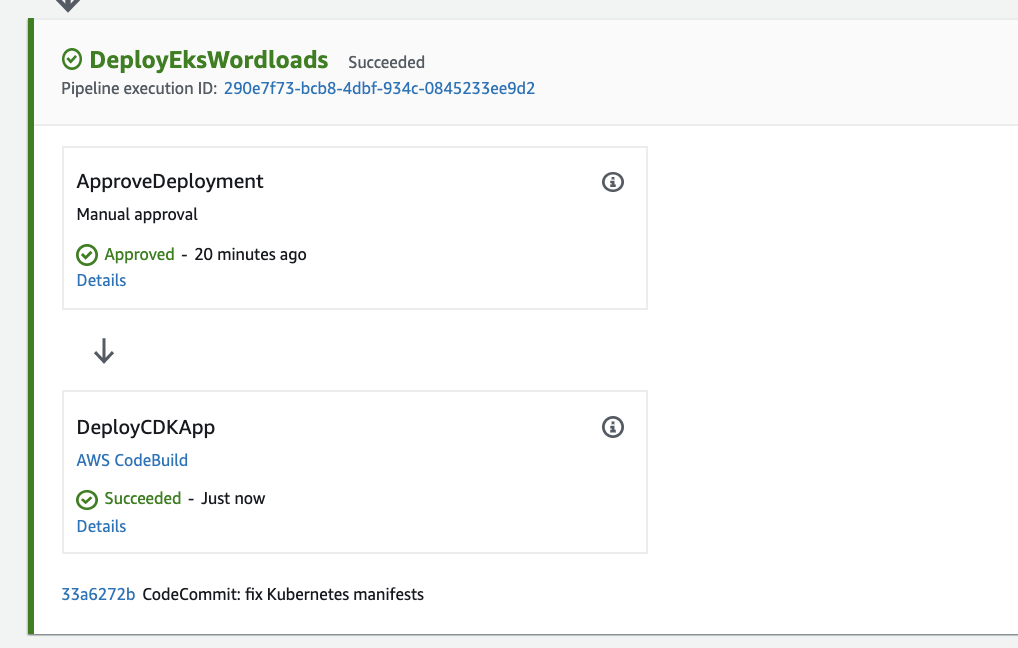 Then click its “Details” link. You should see this CodeBuild step first compiles the CDK codes under the cdk-eks folder. 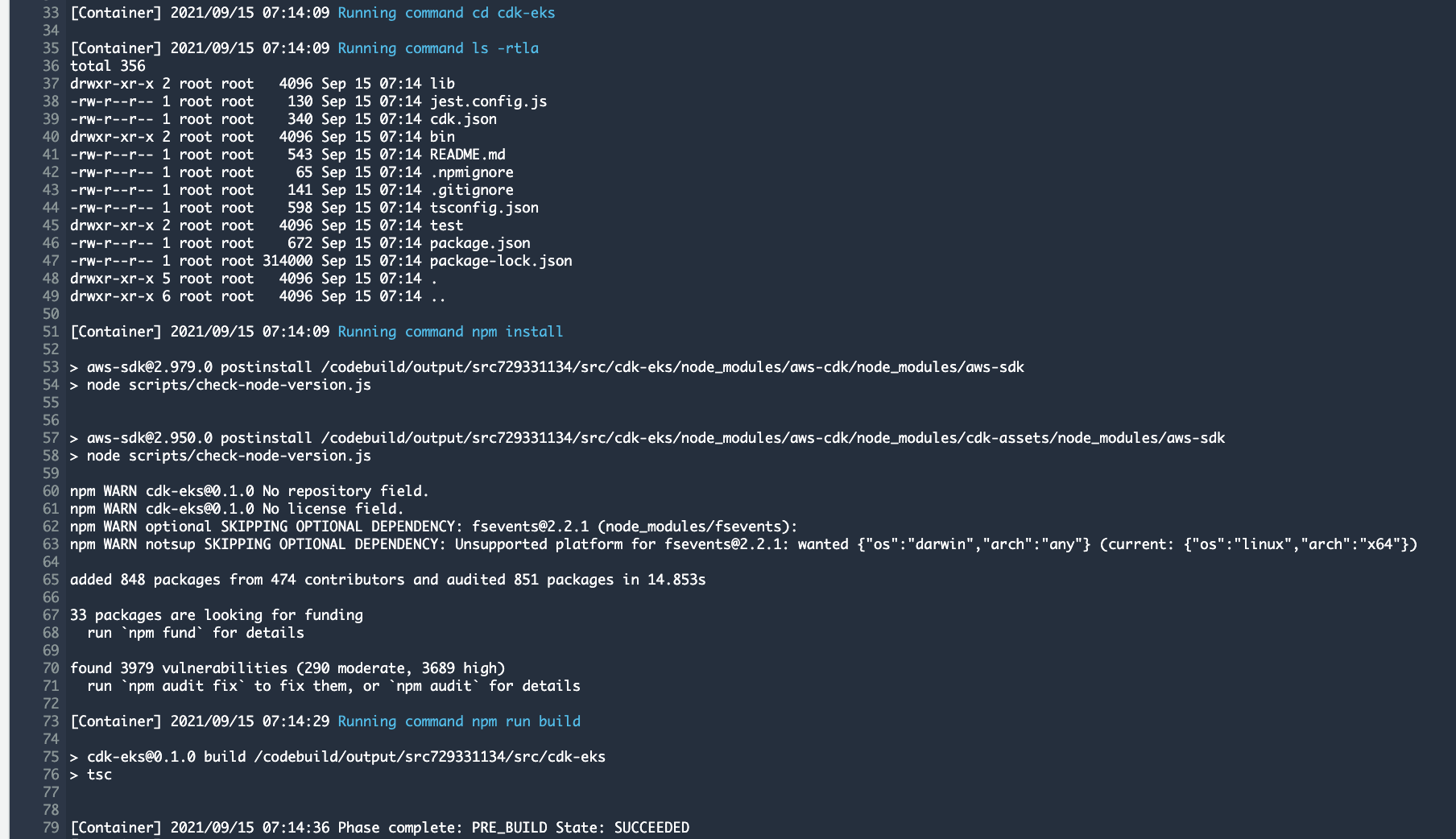 Next it uses “cdk deploy” to provision the EKS cluster and apply the Kubernetes manifests on top.

You can validate that the Kubernetes workloads have been deployed successfully by using kubectl commands on your development terminal. First we need to copy the “aws eks update-kubeconfig” command printed in the CodeBuild window above then check the example Kubernetes workloads ( i.e. nginx and guest-book) are running.

You can also go to Amazon EKS in the AWS Management Console to validate that a new EKS cluster of cdk-auto-k8s-controls has been provisioned successfully.

The code used in this post is wrapped up in four sub-folders according to their purpose. 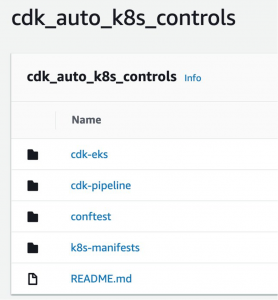 CDK code for the CI/CD pipeline

The CDK codes for provisioning CI/CD pipeline is under the sub-folder of cdk-pipeline. As a normal CDK app repo structure, the cdk-pipeline.ts file under bin folder is the entry file which defines the CDK app and invoke constructor of the stack defined under lib folder.

The validation CodeBuild step defines the steps of downloading Conftest and validates Kubernetes manifests with the following code snippet:

The deploy CodeBuild step defines the steps of compiling the CDK codes under cdk-eks then using “cdk deploy” to provision an EKS cluster and deploy Kubernetes manifests with the following code snippet:

Under the folder conftest, it has the Conftest configuration file under bin sub-folder, Kubernetes preventative control policies in Rego under policy sub-folder and contextual data under data sub-folder which are used in the Rego policy logics. As elaborated in previous section, the validation step in the pipeline uses Conftest configuration and OPA policies under this folder to validate the Kubernetes manifest files.

Under bin sub-folder, the conftest.toml file is a standard Conftest configuration files, which defines Conftest to get policy from “../policy” and get data from “../data”.

Under the folder cdk-eks, it has the CDK codes which provision EKS cluster and deploy Kubernetes workloads. The CDK codes here are compiled and deployed by the deployment step in the CI/CD pipeline described above. As a normal CDK app structure, the file cdk-eks.rego under bin folder is the entry file which defines the CDK app and invoke constructor of the stack defined under lib folder.

Under the lib folder, the file of cdk-eks-stack.rego first provisions an EKS cluster with an AWS managed worker node group composed of 2 m5.large EC2 instances. Such worker node group is the default setting provided by CDK aws-eks module.

Then it iterates the Kubernetes manifest files under the folder of ./k8s-manifests described above and deploy each of them onto the EKS cluster created above.

Now we clean up the AWS resources deployed in the previous section. On your development terminal, go to folder of cdk-eks and destroy the EKS cluster together with its Kubernetes workloads. This step step may take 15-20 minutes.

Then go to the folder of cdk-pipeline and destroy the CodePipeline instance itself with other related CodeBuild projects. Please note the CodeCommit repo will remain since it’s created manually.

Lastly go to the AWS console to remove the CodeCommit repo created at the beginning.

This post demonstrates that by utilising Conftest and OPA Rego policies you can automate Kubernetes preventative controls using CI/CD. As a result, the Kubernetes manifests can be deployed into runtime environment only if they are compliant with all Kubernetes control policies required by the enterprise. And with the power of AWS services, including EKS, CodePipeline, CodeBuild, as well as infrastructure-as-code tool of AWS CDK, we can codify and automate the whole validation and deployment process E2E which will fast-track your adoption of EKS and deploying Kubernetes workloads while keep being compliant with enterprise control policies.