Security groups, acting as instance level network firewalls, are among the most important and commonly used building blocks in any AWS cloud deployment. It came as no surprise to us that integrating security groups with Kubernetes pods emerged as one of the most highly requested Amazon Elastic Kubernetes Service (Amazon EKS) features, as seen on our public roadmap. Today, we are excited to introduce the ability to assign specific EC2 security groups directly to pods running in Amazon EKS clusters.

In this post, we cover use cases addressed by assigning security groups to pods, look under the hood to see how the feature is implemented, and finish with an example tutorial.

Securing applications at the network layer

Containerized applications frequently require access to other services running within the cluster as well as external AWS services, such as Amazon Relational Database Service (Amazon RDS) or Amazon ElastiCache. On AWS, controlling network level access between services is often accomplished via EC2 security groups. Before today, you could only assign security groups at the node level, and every pod on a node shared the same security groups. To work around this limitation, you had to spin up separate node groups per application and configure complicated taint and affinity rules to schedule pods onto the right nodes. This inefficient process is difficult to manage at scale and can result in underutilized nodes as shown below. 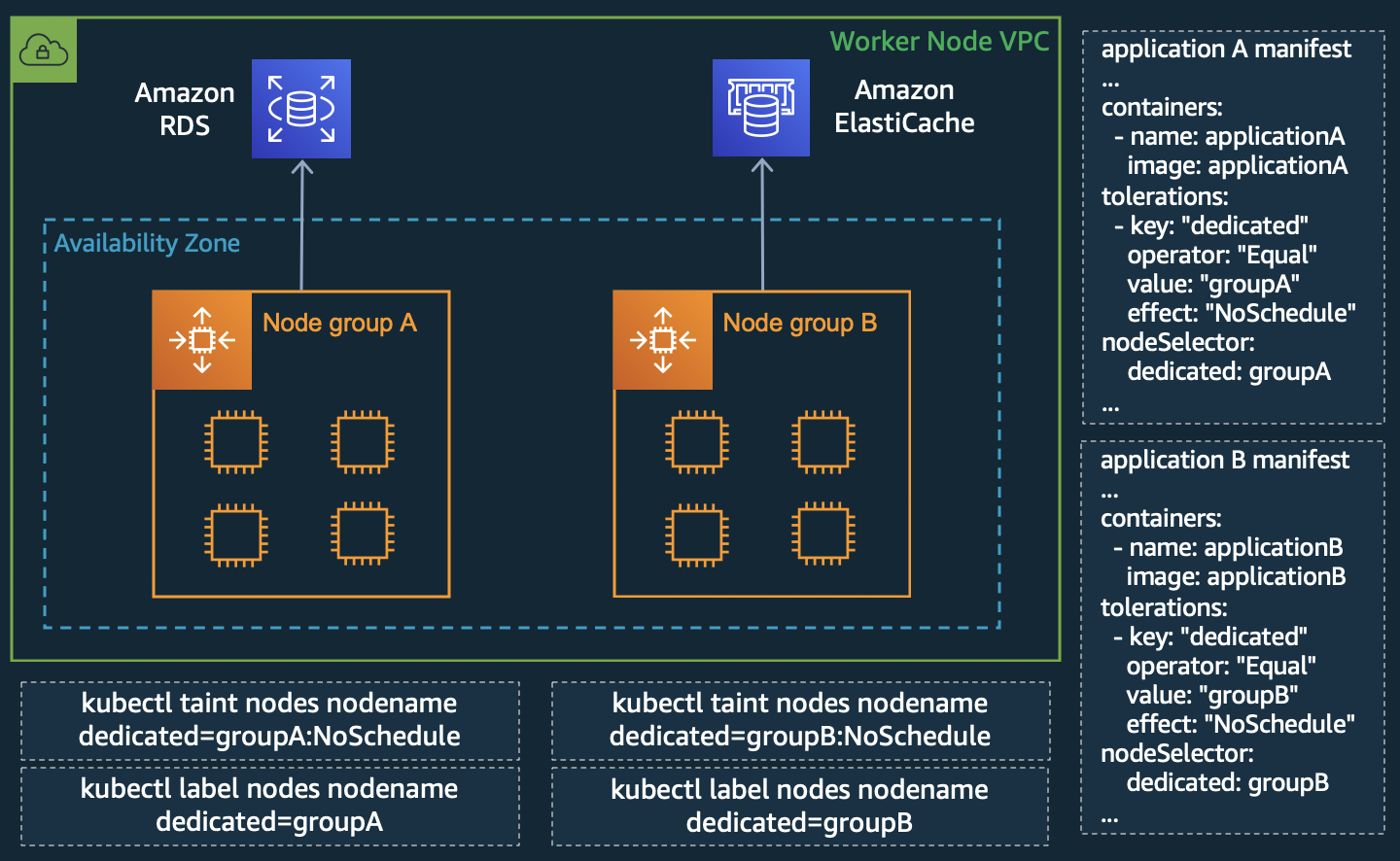 IAM roles for service accounts solve this pod level security challenge at the authentication layer, but many organizations’ compliance requirements also mandate network segmentation as an additional defense in depth step. Kubernetes network policies provide an option for controlling network traffic within the cluster, but do not support controlling access to AWS resources outside the cluster. Additionally, for organizations undergoing application modernization efforts by migrating virtual machine-based services to containers on Kubernetes, it can be simpler to re-use operational knowledge, tooling, and experience around existing security group policies rather than reimplementing rules as Kubernetes network policies. This holds especially true if your security team has built compliance programs around security groups. 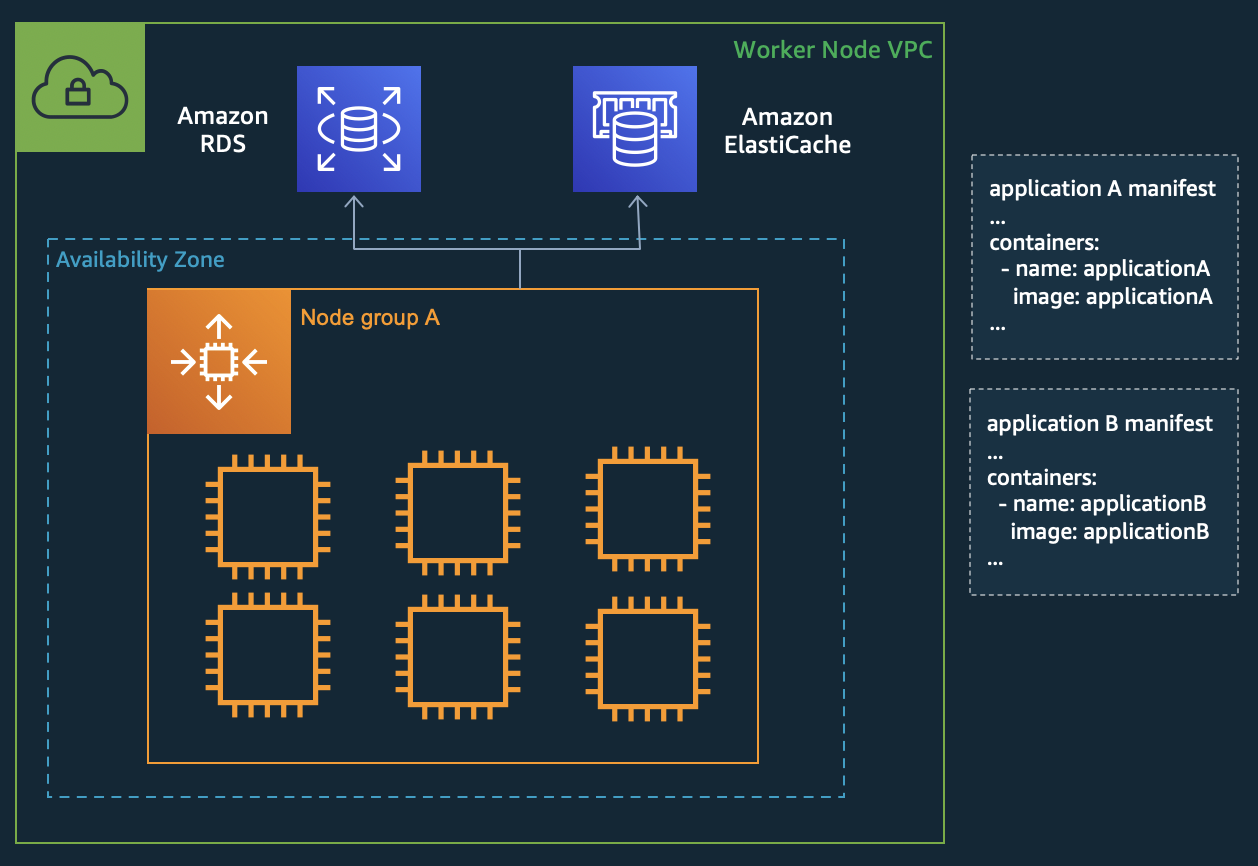 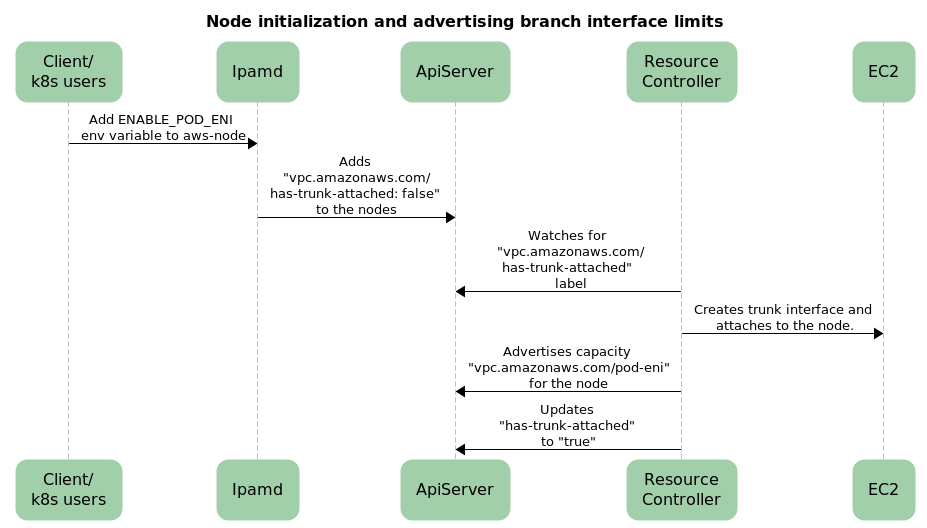 Once enabled with a configuration variable on the Amazon VPC CNI plugin, the IP address management daemon (ipamd) will add a Kubernetes label to supported instance types. The VPC resource controller will then advertise branch network interfaces as extended resources on these nodes in your cluster. Branch interface capacity is additive to existing instance type limits for secondary IP addresses. For example, a c5.4xlarge can continue to have up to 234 secondary IP addresses assigned to standard network interfaces and up to 54 branch network interfaces. ENI trunking/branching is available on most AWS Nitro based instance families, including m5, m6g, c5, c6g, r5, r6g, g4, and p3. If your workloads are not required to be isolated using specific security groups, no changes are required for you to continue to run them using secondary IP addresses on shared ENIs. 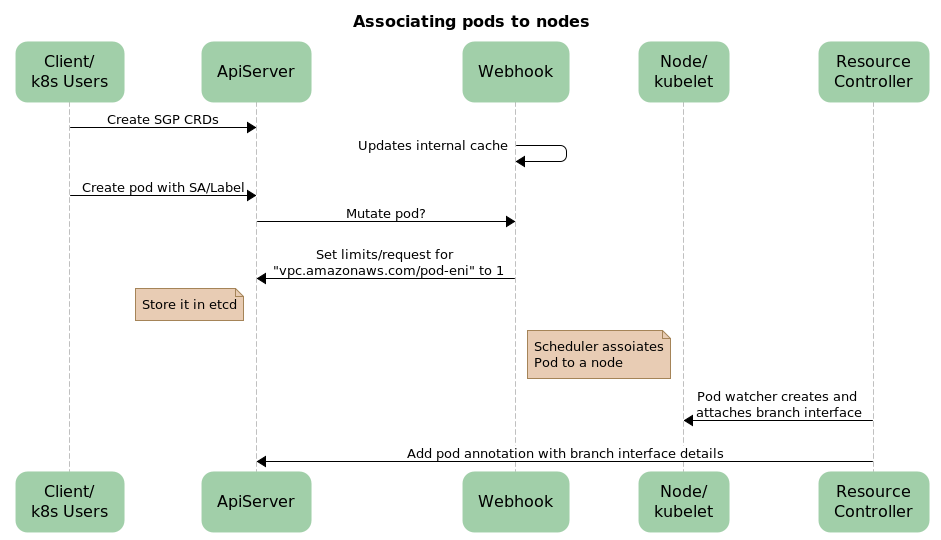 For workloads that do require specific security groups, we took a Kubernetes native approach and added a new Custom Resource Definition (CRD). Cluster administrators can specify which security groups to assign to pods through the SecurityGroupPolicy CRD. Within a namespace, you can select pods based on pod labels, or based on labels of the service account associated with a pod. For any matching pods, you also define the security group IDs to be applied.

The webhook watches SecurityGroupPolicy custom resources for any changes, and automatically injects matching pods with the extended resource request required for the pod to be scheduled onto a node with available branch network interface capacity. Once the pod is scheduled, the resource controller will create and attach a branch interface to the trunk interface. Upon successful attachment, the controller adds an annotation to the pod object with the branch interface details.

The VPC resource controller requires EC2 permissions to modify VPC resources as required by pods in your cluster. To make this simpler, we have a created an AWS managed policy: AmazonEKSVPCResourceController. Given that the controller runs on the Kubernetes control plane, you need to attach this policy to the IAM role associated with your cluster in order to take advantage of applying security groups to pods.

Phase 3: Setting up the pod network 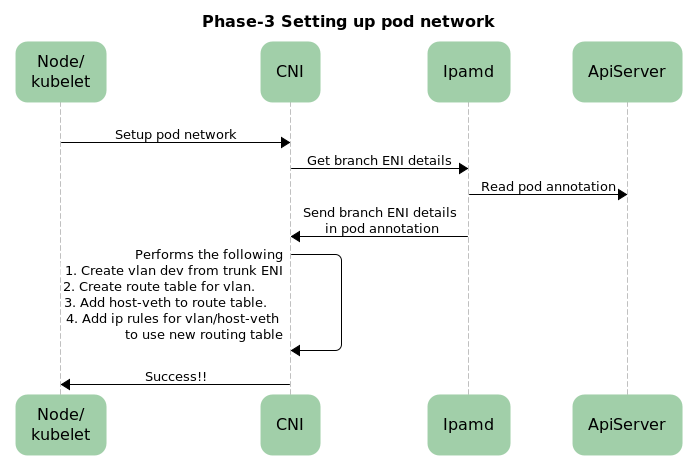 During this phase, the VPC CNI plugin sets up the network for the pod. The plugin queries ipamd to read the branch network interface details, and then queries Kubernetes API server to read the pod annotation. Once the pod annotation is available, CNI will create a virtual LAN (vlan) device from the trunk interface. This device is used only by this branch interface pod and not shared with any other pods on the host. The CNI will then create a route table with default routes using the vlan device and associate a host virtual ethernet device (veth) end of the pod to this interface. Finally, the CNI plugin adds iptables rules so that all traffic flowing into this host veth and vlan will use this route table.

In the following tutorial, we walk through a typical use case where assigning security groups directly to pods comes in handy, allowing only certain pods scheduled onto the same node to access an Amazon RDS database. In this example, we combine IAM roles for service accounts with pod level security groups for a defense in depth strategy.

Use eksctl to create a cluster. Make sure you are using at least version 0.27.0 to follow this example. Copy the following configuration and save it to a file called cluster.yaml:

Retrieve the VPC ID created by eksctl along with your cluster.

Before creating the database, let’s create a security group that will be used by applications that require database access.

Next, follow the RDS instructions to provide network access to your database by creating another security group. When you get to step 7 for inbound rules, specify the source as the security group created in the previous step.

Enable pods to receive their own network interfaces

You need to be using version 1.7.0 or higher of the Amazon VPC CNI plugin to enable security groups for pods, although we recommend upgrading to at least version 1.7.7. The Amazon EKS documentation contains instructions on how to check your version and upgrade if necessary. Once you’ve confirmed your cluster has the required VPC CNI version, run the following command to enable pod ENIs:

Note: If are you using liveness or readiness probes, you also need to disable TCP early demux, so that the kubelet can connect to pods on branch network interfaces via TCP. To do this run the following command:

Under the initContainer section, change the value for DISABLE_TCP_EARLY_DEMUX from false to true, and save the file.

Copy the following configuration and replace the sample policy ARN with the one created during RDS database setup. Save this to a file called serviceaccount.yaml:

Apply a SecurityGroupPolicy to the cluster

Let’s print out the two security group IDs that we’ll add to our SecurityGroupPolicy. The first security group we want to apply is the EKS cluster security group, which enables the matched pods launched onto branch network interfaces to communicate with other pods in the cluster such as CoreDNS. The second security group is the previously created one for applications that require access to our RDS database.

Copy the following configuration, replace the security group IDs with the values from above, and save it to a file called sgp-policy.yaml:

SecurityGroupPolicy is a namespaced scoped CustomResourceDefinition. Here, we created a policy that assigns the specified security groups to any pods in the default namespace associated with a service account containing a label key equal to role and value equal to backend. Note that SecurityGroupPolicies only apply to newly scheduled pods, and do not affect running pods.

Build a sample application to connect to RDS

Next, we containerize a simple Python application that connects to our Postgres database and prints the version if successful, or an error message. This example is modeled from the RDS documentation. Save the following as postgres_test_iam.py.

Save the following as Dockerfile.

Now let’s build our container and push it to Amazon ECR. Make sure to use your account ID in the example commands.

Now let’s deploy our application and test that only the desired pods can access our RDS database. Save the following as postgres-test.yaml. Replace the HOST, DATABASE, and USER environment variables with the values from the step above where you created the RDS database.

Let’s check the logs to confirm that this pod can indeed access our RDS database.

Success! Now for a thorough test, let’s modify our pod configuration slightly to remove the service account. This pod will no longer be matched by our security group policy, and should not be able to access the database. Keep in mind that we created our cluster with a single node, so this pod will be scheduled to the same node as the previous pod. Save the following as postgres-test-no-sa.yaml.

And that’s it! Two pods on the same node, but only one can access our database.

There are many things to consider when it comes to running a secure Kubernetes cluster. Every organization has their own security and compliance policies, some of which are tightly coupled to security groups. If you fall in this category, assigning security groups directly to pods can simplify existing application deployment patterns, and ease the path of migrating EC2 based workloads to Amazon EKS.

In this post, we showed you how pod security groups can be combined with IAM roles for service accounts to provide a pod level defense in depth security strategy at both the networking and authentication layers. Security groups for pods is available today with newly created Amazon EKS clusters running Kubernetes version 1.17. Support for existing clusters will be rolled out over the coming weeks. Learn more in the Amazon EKS documentation.