This blog post shows how a Windows worker node can be added to an already existing Amazon EKS cluster and how to do an end-to-end test to ensure that Windows container workloads can be successfully executed. This blog post focuses on how a manual bootstrap of a worker node works so that this approach can be adapted for an infrastructure as code (IaC) deployment. The blog post will also show how to use the Terraform EKS module to add a worker node to an Amazon EKS cluster.

Additionally, a repository implementing a complete private Amazon EKS setup with Windows and Linux worker nodes in Terraform is available as part of the AWS-Samples repository.

After reading this blog post, you will be able to migrate and run your Windows workloads on an EKS cluster with nodes that are communicating to the control plane via a private endpoint. 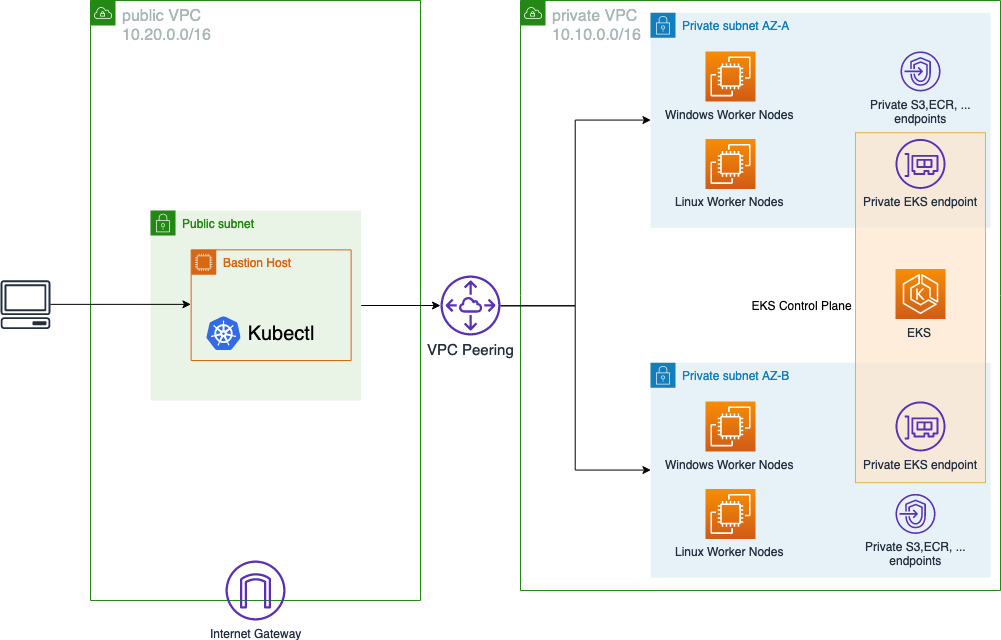 In this blog post, we will show how to do the following:

An Amazon EKS cluster that is deployed via Terraform and already fulfills all these requirements is available as part of the AWS-examples repository: private-eks-for-windows-workloads-with-terraform

The EKS optimized Windows AMI that is provided by AWS includes scripts and executables that are needed to join the nodes to the EKS cluster once they are ready.

This blog post will use the Amazon EKS optimized Windows server core edition.

The file Start-EKSBootstrap.ps1 starts and configures the necessary local components like kubelet and kube-proxy to join the given cluster.

The following command can be used on a node to join the EKS cluster:

The bootstrap script will create a kubelet and kube-proxy Windows service on the node and start both with the provided configuration.

The following is the complete user data content for the EC2 instance bootstrap:

Insert the values for <EKS API endpoint> & <Certificate data> with the values that were collected in the previous steps. Note the User data content down as it will be used in one of the next steps.

The roles that are attached to the nodes, Linux and Windows alike, need to be allowed to access the resources required by the kube-proxy component. They need to have access to the cluster role system:node-proxier (see Core component roles for details). Such a cluster role binding already exists in an EKS cluster: eks:kube-proxy-windows.

Execute the following command to see the details of the cluster role binding:

In order to allow your Windows worker nodes to access the necessary networking components, add the following to the end of the aws-auth ConfigMap as part of the mapRoles section in the kube-system namespace:

Replace the rolearn with your ARN for the node role. See Enabling IAM user and role access to your cluster for details about the aws-auth ConfigMap.

You can also download an example and modify it accordingly:

However, this example does not include any additional roles or users that were already defined as part of your cluster setup.

Create a Windows EC2 instance with the user script:

The tag is necessary as additional information for the bootstrap script and is accessed via the EC2 instance metadata.

After a few minutes, the instance should be started and should show up as part of the EKS cluster:

Review Deploy a sample application to deploy a Windows workload.

This creates a simple webserver without any dependency on a public endpoint and is derived from Webserver.yaml.

For the Windows AMI version Windows_Server-2019-English-Core-EKS_Optimized-*, the image used by the sample workload is already available on the node. If another Windows server version was used, make sure to replace the value “image” inside of the .yaml definition with the correct tag of the correct kernel version.

Once the workloads and the services run successfully on the cluster, execute the following commands in order to test the setup.

The execution of these workloads validates the following:

Adding Windows support for EKS in Terraform and adding a Windows node group:

The following code-snippets are using version 18.6.0 of the Terraform eks module and they automate the steps that were manually done in this blog post. For a complete working example, refer to the aws-samples repository.

This code enables the EKS cluster to run Windows workloads while using the files additional_roles_aws_auth.yaml and vpc-resource-controller-configmap.yaml:

Amazon EKS optimized Windows AMIs get released frequently with the latest security patches. The following code gets the most current Windows AMI that is available during execution time:

The following code-snippet shows an example of a Windows self_managed_node_group that can be added to an existing EKS module implementation.

The Terraform eks module uses a template of a bootstrap script similar to the one used in this blog post. See windows_user_data.tpl for details.

In this blog post, we demonstrated how to run Windows worker nodes on a private EKS cluster. We have shown how to do an admission of a Windows worker node and have provided the necessary user data script for the EC2 instance. Additionally, we have shown how to test the overall EKS setup to validate that the setup is complete and the cluster can be used for actual workloads.

Finally, we have shown the necessary Terraform implementation to enable Windows support and to add a Windows node group. The repository private-eks-for-windows-workloads-with-terraform complements this blog post by providing  a complete Terraform implementation of a private EKS cluster which you can use to get started running your Windows workloads on EKS.