Scanning images with Trivy in an AWS CodePipeline

If you’re working with containers, it’s important to scan your images for known vulnerabilities, so that you don’t deploy code that an attacker can easily exploit. A good way of ensuring that all your deployed images get this check is to include scanning as an automated step in your CI/CD pipeline. Let’s see how easy it is to include the open source scanner Trivy in an AWS CodePipeline. There’s a fun bonus for those of us who like containers: CodePipeline builds run in containers!

Why vulnerability scanning is important

A container image scanner like Trivy looks at the contents of an image to check which packages it includes, and checks the package versions against various data sources of known package vulnerabilities. Vulnerabilities range in severity from the trivial right up to critical – sometimes they are so serious that they become practically household names, like ShellShock, Heartbleed or Dirty Cow. You really don’t want these running in your deployment! These well-known vulnerabilities are just the tip of the iceberg – there are thousands of known issues, with more being discovered every day. If you take security seriously, a vulnerability scanner is a crucial part of your toolkit.

Trivy is an open source container image scanner that’s easy to install and use, as you’ll see if you follow the demos in this post.

My first demo sets up a pipeline that builds an image from a Dockerfile, downloads, and runs Trivy over it. If the Trivy scan is successful, it pushes the image to the AWS image registry, ECR. Then I’ll show you how to improve this set-up by building a custom build environment with Trivy already installed. Along the way I will mention a couple of things that tripped me up, in the hope that it will make things smoother sailing for you.

Just as for anything else in AWS, you will need to get IAM service roles configured correctly. I created a service role called CodeBuildServiceRole with the policy defined here, which gives permissions for the things that CodeBuild might need to do, such as generate CloudWatch Logs, pull from CodeCommit, get and put objects in S3 buckets, and pull images from ECR. (My demo doesn’t actually need the S3 permissions so I could have removed the S3-related parts from this example service role, but you might need them depending what else you are doing in your CodeBuild.)

You can use the console or the CLI (aws codepipeline) to configure the pipeline. My scanning pipeline consists of two stages.

Once set up, the AWS Management Console gives a nice display of the pipeline stages: 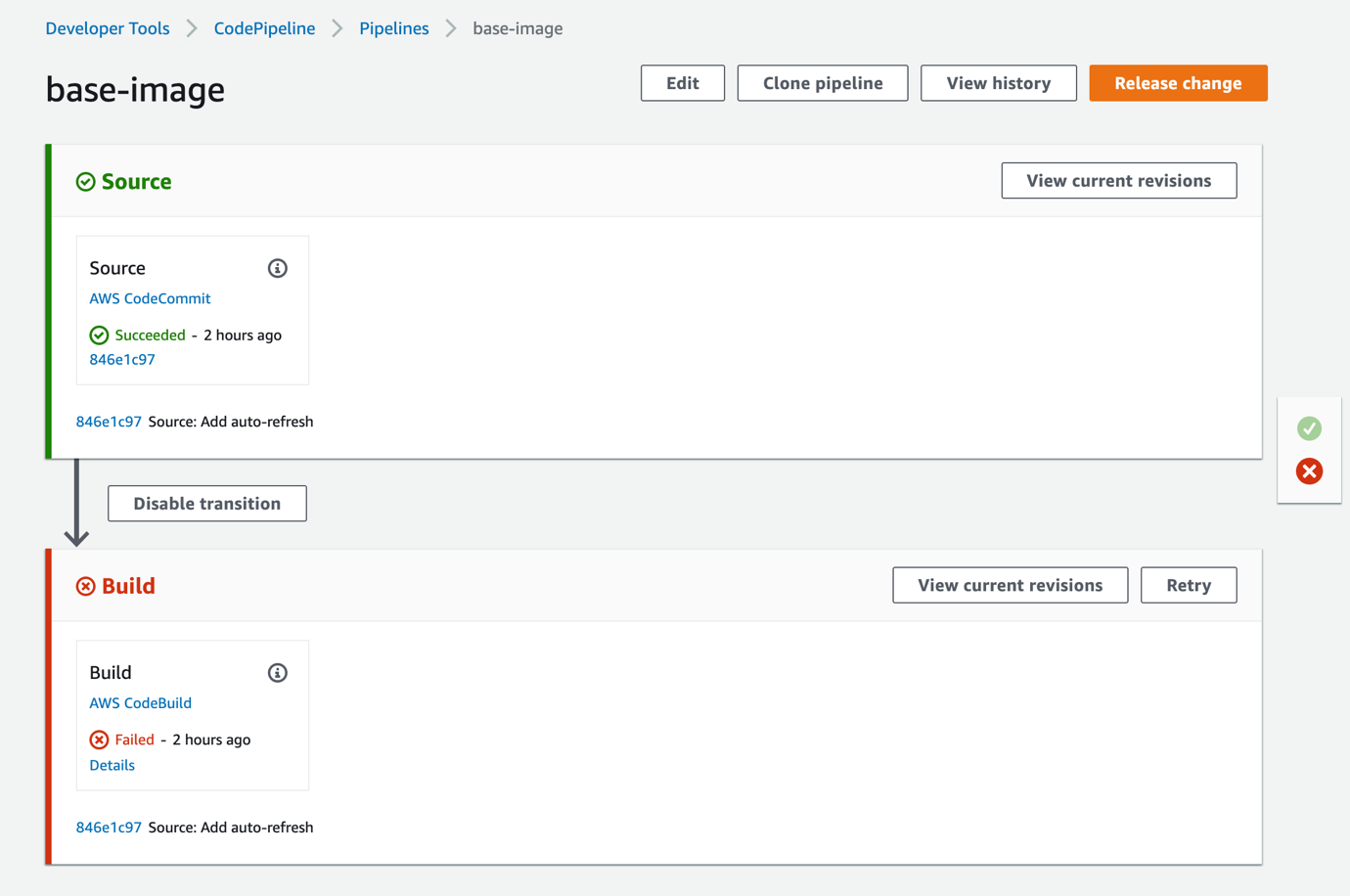 Figure 1 The CodePipeline has two stages. In this example, the most recent run of the pipeline failed, because the scan found a high-severity vulnerability in the image being scanned.

But before you’ll see a screen like that, you’ll need to configure the CodeBuild project.

As I mentioned, builds in AWS CodeBuild run in containers, and the images for these containers are known as “build environments”. AWS provides a selection of managed build environment container images, but it also allows you to configure any image of your choice. For my first demo I’m using aws/codebuild/standard:2.0, which gives me an Ubuntu environment to build in.

In order to build a Docker image in CodeBuild, you will need to set the privilegedMode setting for the build to true, because this will be running Docker-in-Docker to generate an image build within the containerized CodeBuild environment.

By default CodeBuild will look in the source code repository for a file called buildspec.yml, which defines the build steps. Mine includes several phases, which are highlighted in bold:

The first phase is an install phase, which specifies one of the available runtimes. Since I am doing a Docker build, I picked a Docker runtime.

The pre_build phase starts by installing Trivy into this Ubuntu container using apt. Once Trivy is in place, it logs in to ECR and sets up an environment variable for the target image that we want to push if the scan is successful.

Then we get to the build phase which uses Docker to build the container image from the Dockerfile.

Finally a post_build phase runs Trivy on the image that is built. There are a few useful parameters for running Trivy in a CI/CD pipeline.

If Trivy doesn’t find any high or critical severity issues, it will return an exit code of 0 and the build script will continue, and finish by pushing the image to ECR.

There is one more file we need for this build to work: a Dockerfile to specify what should happen in the docker build command. For my demonstration my Dockerfile consists of one line, which specifies a base image that I would like to scan:

This Dockerfile goes in the same source code repository as the buildspec.yml file.

Since the pipeline is triggered by a change to the source code, simply pushing a new version of the Dockerfile will cause a new run of the pipeline.

Here’s the output when the Dockerfile specifies a base image of alpine:3.10.0, which (at the time of writing) is known to include one high-severity issue. 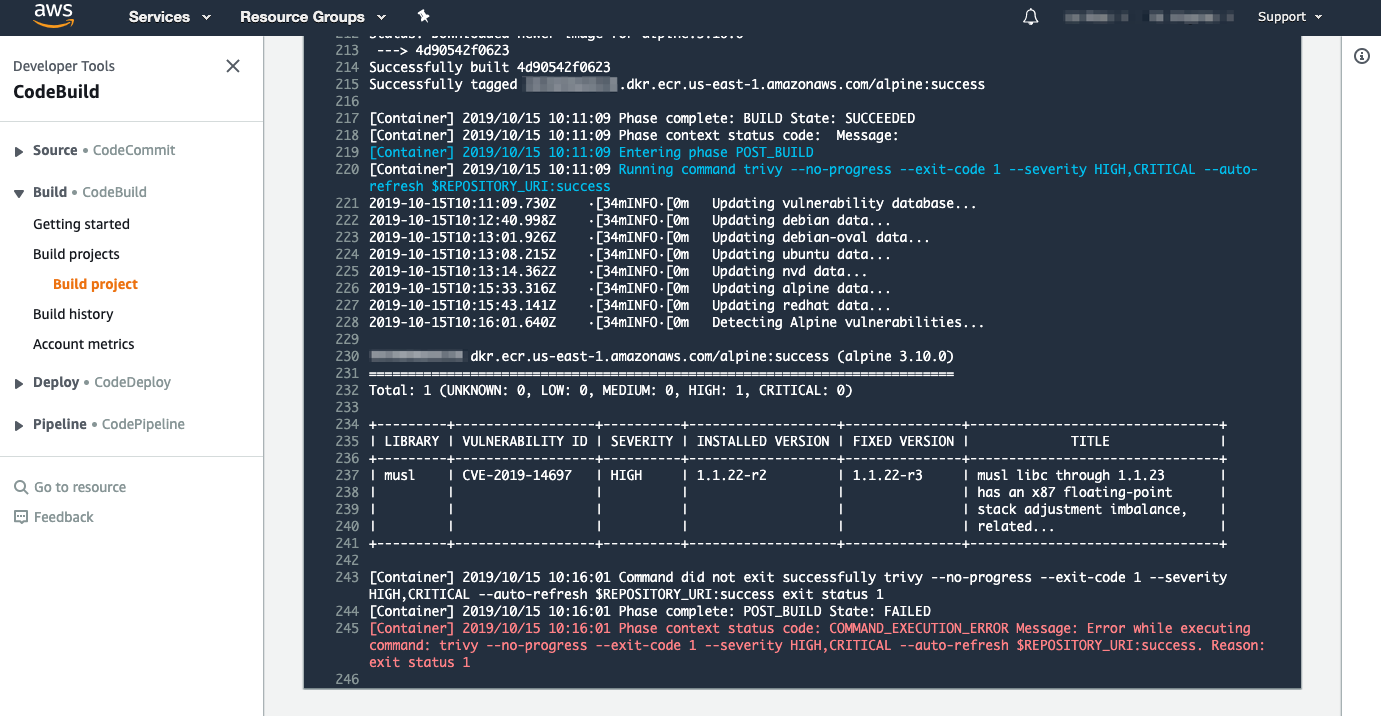 Because of the high-severity vulnerability in this issue, Trivy exits with a value of 1, and the image isn’t pushed to ECR.

Before we move on, let me share a hint that might be helpful if, like me, you inadvertently set up a CodeBuild project with the wrong service role.

A note on permissions

At one point I had a CodeBuild project that was failing to log in to ECR with the following error.

The CodeBuild project wasn’t using the service role I had prepared earlier. I must have missed this when first creating the project with the console, and I’ve not been able to find where to modify it in the console later. Fortunately, it’s easy enough to do with the CLI:

This is where I should have configured the Service Role when setting up the CodeBuild project in the console in the first place:

Modifying the code in a running container is frowned upon for several reasons including these:

Given all these issues, I would be much happier using a pre-built container image that holds all the software that will run during the build, including the Trivy vulnerability scanner. It should also be more efficient to use a container image with it already built in, since it avoids the installation step of downloading code over the internet.

AWS published the contents of the build environment images on GitHub, but at the time of writing, pre-built versions of these images aren’t published. So here are the steps I’ve taken to get my own copy of a standard build image, and create a new version with Trivy included.

The buildspec.yml file for this simply builds this Docker image and pushes it to an ECR repository.

Running this build pipeline creates a new container image called scanner-build-env suitable for use as a build environment.

Scanning with a custom image

I can now specify this build image as a custom image for a new CodeBuild project. 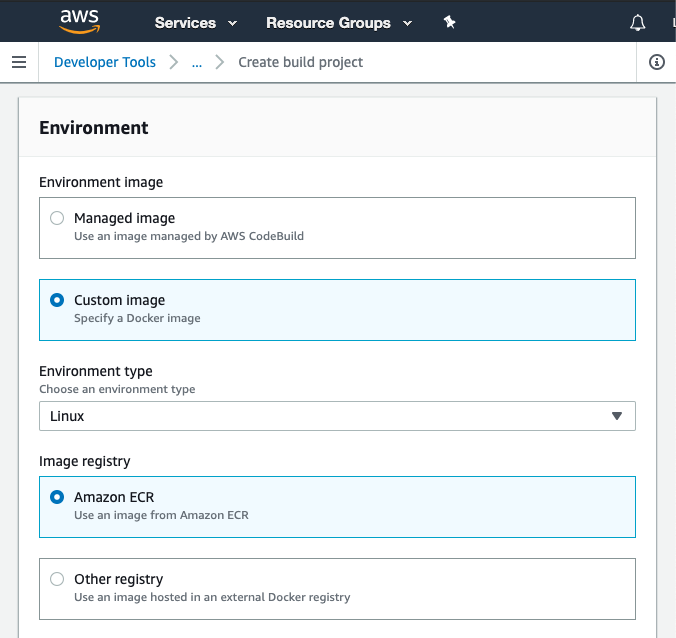 You have to set up permissions on the ECR repository so that CodeBuild can pull this custom image from ECR, as described here. The permissions screen looks like this:

This CodeBuild project has a simpler buildspec.yml file, which I thought would only need to build the image specified in the Dockerfile, scan it with Trivy, and (on success) push the image to ECR. But in order for it to work, it turns out that I also needed to add commands to start Docker too.

Starting Docker in the custom image

Docker is started automatically in the build environment when you use one of the managed images, but this doesn’t happen for the custom images. Without Docker running, you’ll see errors like this:

As described here, when using a custom build environment image, you have to explicitly start Docker by including these commands in the buildspec.yml file:

The buildspec.yml file for scanning

The build phases are similar to what we used in the first version of this demo, except that there no longer need to be any commands to install Trivy. Instead, the build spec needs the commands to start Docker as described in the previous section. Experimentation showed that I still needed the install phase to specify Docker as the runtime version. The resulting buildspec.yml file looks like this.

We saw earlier the result when scanning alpine:3.10.0, which had a high severity vulnerability, which caused the build to fail. If we modify the Dockerfile to specify alpine:3.10.2, it doesn’t find issues: 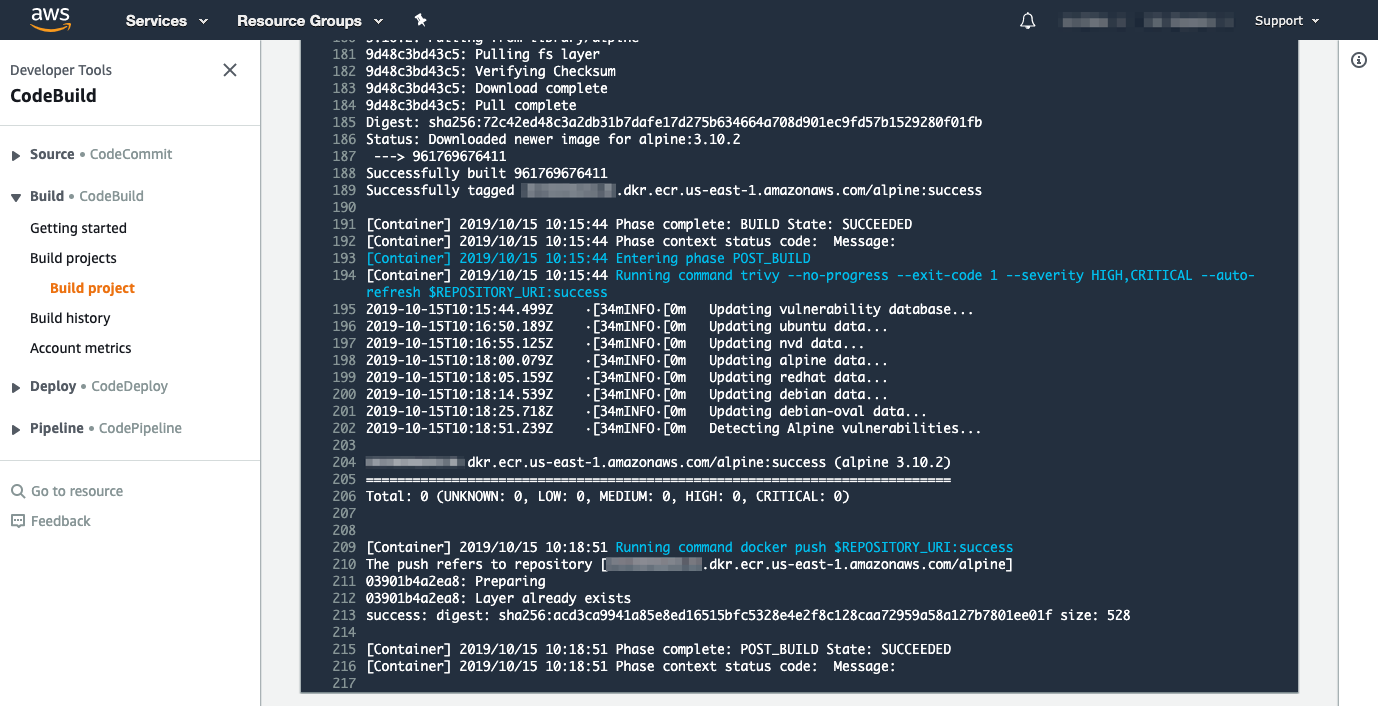 This could change if a vulnerability is discovered in any of the packages included in this version of Alpine. The fact that new vulnerabilities are found all the time is why you should scan images on a regular basis – at Aqua Security most of our customers scan all their deployed images at least every twenty-four hours.

What should you do if a scan finds a significant vulnerability? For each vulnerability discovered, Trivy shows the package version that it found in the image (which is affected by that vulnerability), and it also shows the version number that includes the fix for that issue. To remove the vulnerability, you’ll need to rebuild the container image to include a version of that package that’s new enough to include that fix.

In the example I’m showing in my demo, the affected package was included in the base image. Check for updated base images, and update your Dockerfile accordingly. Alpine 3.10.0 included the vulnerable version of musl, but this was updated in Alpine 3.10.2.

In other cases, the package might be installed on top of the base image by a command in the Dockerfile. For example, it’s common to see package manager commands like apt,apk or yum specified in the Dockerfile. If these specify the version of the affected package, you’ll need to edit the Dockerfile accordingly. If they don’t specify a version, running the image build again should pick up the latest available version.

From time to time a vulnerability is published without a fix being made available at the same time, although it’s rare for this to happen for high or critical severity vulnerabilities. In this case, Trivy (or any other vulnerability scanner) won’t show a fixed version because no such thing exists. You can look up the vulnerability by searching for the CVE identifier included in Trivy’s output, and this will explain how the vulnerability could be exploited and what its effects are. You may find that it’s not possible to exploit in your environment, or that it’s a sufficiently low risk that you’re prepared to run with it deployed.

Deploying with CodePipeline and other improvements

In this post I’ve shown how you can use CodePipeline to scan your images. In my example, the image only makes it to ECR if it meets the criteria of having no high-severity vulnerabilities. A separate deployment step could then have access to this image.

I only used Source and Build stages in my pipelines. CodePipeline also supports a Deploy stage, which you could use to deploy an image, ensuring that it passed the scan step first.

In this demo, I hard-coded the tag for the image to be $REPOSITORY_URI:success. A production-ready version would likely tag the image with a semantic version number.

If you are inspired by this post to include scanning in your AWS CodePipeline, I’d love to hear about your experiences. You can find me on Twitter as @lizrice.