This post has been updated due a recent launch.

Designed for simplicity from the start, Amazon ECS delivers an AWS-opinionated solution for running containers at scale. Previously, customers had to implement a lengthy workaround (detailed in the original blog post below) in order to use an Amazon FSx for Windows File Server as persistent storage for Windows containers running on Amazon Elastic Container Service (ECS). Today, Amazon ECS launched a managed feature on EC2 launch type allowing you to use Amazon FSx for Windows File Server natively within ECS task definitions removing a lot of the undifferentiated heavy lifting from your workflows.

Before we look at the new feature details, here are some prerequisites :

Here is a sample volume definition for an FSx for Windows file server using the AWS Management Console: 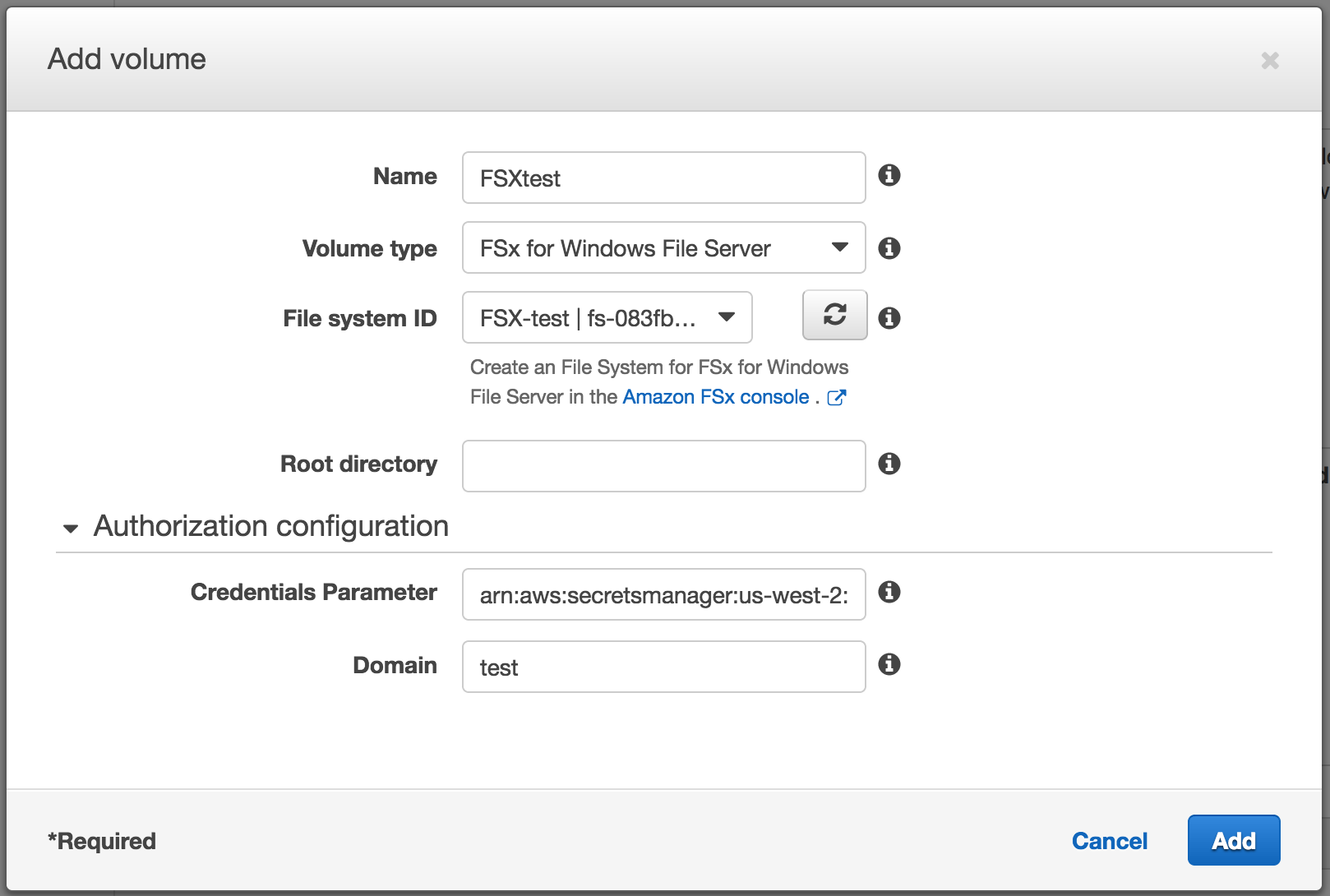 You can now create an ECS service/standalone tasks for your containers that use the Amazon FSx for Windows File Server as the persistent, shared storage with ECS managing the task’s volume’s lifecycle and mounting the filesystem directory into the container, enabling the following use cases:

As always, we welcome your feedback on our public Github Roadmap

In this blog post, we are going to walk through a step-by-step process on how to use Amazon FSx for Windows File Server as persistent storage for Windows Containers running on Amazon Elastic Container Service (ECS). We will achieve this using an AWS System Manager Document to automate the file share mapping on the container instance and configure an ECS task definition to present a Docker volume into the container.

Please note, we are currently working on officially supporting persistent storage for Windows Containers through Amazon FSx File Share. The managed feature aims to remove some of the undifferentiated heavy lifting necessary for the work-around highlighted below.

How are we going to achieve this?

We will leverage an existing feature in the SMB protocol called “SMB Global Mapping” on Windows Server version 1709 (Windows Server 2016 “Semi-Annual Channel”). Using SMB Global Mapping, it is possible to mount an SMB share on the host, then pass directories on that share into a container. The container doesn’t need to be configured with a specific server, share, user name, or password, that is all handled by the host instead. The container works the same as if it had local storage.

In this blog we will do the following:

1. Create two parameters on System Manager Parameter Store for the username and password.

From the PowerShell console, create two SSM parameters, which I choose the name “domainUserName” to store the Active Directory user account information and “domainUserPassword” to store the password encrypted by the AWS KMS. The -Value must be an existing user account and password that you designed to be used in the share authentication/authorization phase between the ECS Container Instance and the File Share provided by Amazon FSx for Windows File Server.

2. Create a System Manager Document to set up SMB Global Mappings on the ECS Container Instance.

Create a JSON file (filename.json) locally with the following content and make the changes suggested below.

The above JSON script creates a new SMB global mapping and maps the path “\\Share\\Directory’” from Fsx Windows Share to a local drive “G:” on ECS Container Instance using the ‘domainUserName' and 'domainUserPassword' SSM parameters created during step-1

2.1 With the file created in your local machine, let’s create an SSM Document. From the PowerShell Console:

[Optional] 2.2 As a security best practice, you may want to Disable Inheritance on the designated directory in which you are going to use as your main Docker Volume Storage and remove Authenticated Users since the directory contains all the data presented to the Docker container as volume (eg: app sources, databases, confidential files). After that, Add the existing user account you have select as the user account to authenticate the SMB File Share. Select Modify Permission. 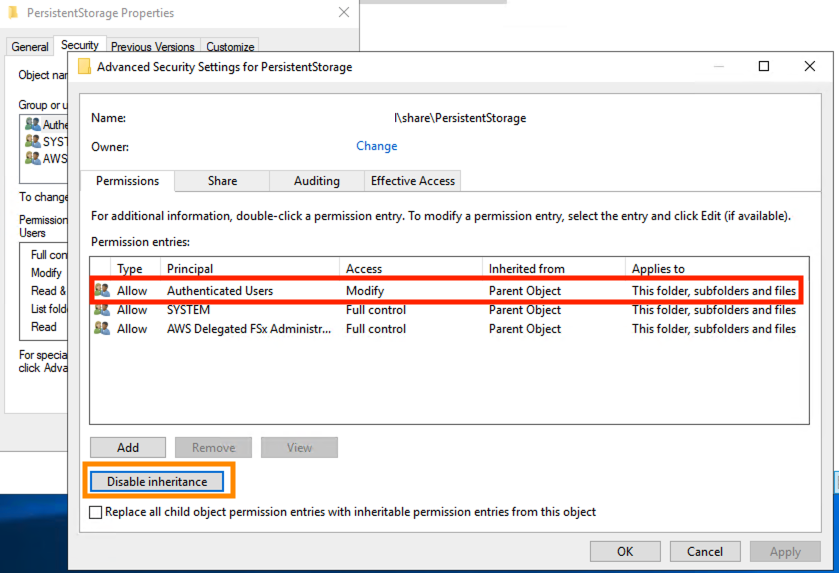 3. Attach the KMS and SSM Policy to the existing ECS Role.

In order to enable KMS and System Manager usage from an ECS container instance, we need to be sure that the correct IAM Policies are attached to the ECS Instance Role created when you built your ECS Windows Cluster. Normally the container instance IAM role created by ECS is called ecsInstanceRole.

The first step is to create and attach a new policy on the ecsInstanceRole. This policy gives the instance permissions to call the kms:Decrypt API used by SSM parameter with secure string value. Which means the Password Parameter we have created in the step 1. Create a JSON file and save it in your computer using the example below:

3.1 Now, it’s time to create and attach the policy on the ecsInstanceRole. From the PowerShell console, run:
*Replace ACCOUNT-ID with the Account ID number.*

4. Run the System Manager Document to set up SMB Global Mapping on the ECS Container Instance.

Finally, let’s see the result! Run the command below from the PowerShell console to invoke the SSMCommand in order to run the document created on step 2.

Note: If your ECS cluster has multiple ECS Windows container instances then you might have to execute the above command on all of them. To do this in one step, specify their instance IDs up to a maximum count of 50 with the -InstanceId parameter.

You will probably receive an output like mine! If you pay attention on the Status, you are going to see: Pending, since the SSM is executing the command into the Amazon EC2 Instance.

4.1 Verify that the SSM document ran successfully by running the above command using its command Id as shown below.

The above command is expected to return following similar output with Status “Success.”

You should see a result with something like this. (In the below output persistent storage is the directory used for this blog, but in your case this will be the ‘Directory’ used in Step-2 with New-SmbGlobalMapping command.

5. Create a task definition to launch a container and see the results.

In order to present a directory as a volume from the G:\ drive to the container, you need to configure the Volumes option in the task definition.

As you can see, I selected the Volume type as Bind Mount. When you use a bind mount, a file or directory on the Amazon EC2 instance is mounted into a container. The file or directory is referenced by its full or relative path on the host machine. The feature called “SMB Global Mapping” makes it possible to mount an SMB share on the host, then pass directories on that share into a container. The container doesn’t need to be configured with a specific server, share, user name, or password, that is all handled on the host instead. The container will work the same as if it had local storage.

The source path for the specific Task Definition must be a directory in the share where all the data is going to be exposed to the container.

G:\ is the Drive Letter selected to be the mount point for the SMB Share in the step 2.
Container1 is the directory inside the share, which I created to be used in this task definition.
app-state is the directory that is going to be exposed into the container.

5.2 The Volume was configured in the Task Definition Level. Now, you need to inform in the Container Definition (Inside Task Definition) the mount point for the container (Container Path) mapping to the Volume that you have just created in step 5.1.

You need to make sure the container image already have the Container Path you want to override. Otherwise it will fail. Check the Docker documentation.

If you dig in the mount configuration you just did through the Task Definition and Container Definition, it is the same as:

That is it! You have just configured your Amazon Container Service (ECS) to mount a container volume through an SMB share hosted in Amazon FSx for Windows File Server. The approach of data persistence into a container isn’t ideal for new Cloud Native apps, but for legacy application, this is a must-have. An example that fits very well is legacy ASP.NET applications, where it is possible to redirect the application directory without any code change and achieve high availability and disaster recovery using Amazon FSx for Windows File Server on Multi-AZ deployment.