We’ve published an AWS Cloud Development Kit (CDK) public roadmap on GitHub! As an open source project, we’re all about transparency and want to help you plan by making it easier to follow upcoming features and let us know what we should work on next. Checkout the CDK roadmap to see what we’re up to, and even better, become a contributor and be a part of the growing open source community.

In July 2019, we launched the AWS CDK, a code-first approach to defining cloud application infrastructure. Since that launch, following the “release early, release often” philosophy, we’ve shipped over thirty versions of the AWS CDK to deliver new features to you as quickly as possible. A steady stream of feature releases is great but, unless you’re an aws/aws-cdk repo watcher, it’s been difficult to keep up with everything that’s going on. That’s why we’re pleased to share a GitHub project board that summarizes our work in progress, across multiple repositories, to give you a heads up on what to expect next from the CDK.

Multiple repos you say? That’s right! You may know about aws-cdk repo where we’re building the CDK core framework and the AWS Construct Library. But there’s also the aws/jsii repo, the technology that enables the CDK to deliver polyglot libraries from a single codebase. And last but not least, the aws/aws-cdk-rfcs repo where we conduct our feature design in the open, and request comments from customers like you. 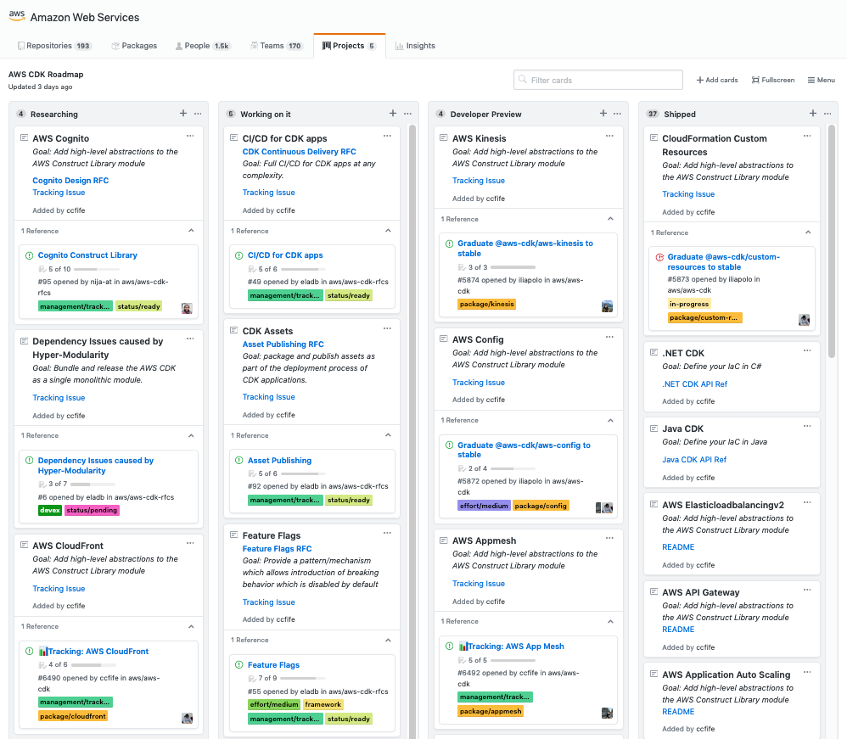 Here’s what the different columns on the project board mean:

Researching – We’re thinking about it, but cannot commit if, or when, we will work on items in this list. This means we are still designing the feature and evaluating how it might work. This is the phase when we collect use cases and feedback on how you want to see something implemented. There is no firm commitment to deliver functionality listed in the Researching column, and there might be situations that require us to move items from the roadmap back to the backlog.

Working on it – In progress, but further out. We have made an implied commitment to work on items in this bucket, they have some level of design spec’ed out, and a developer assigned to them. Items might linger in this bucket as we work through the implementation details, or scope stuff out. Think several months out until a developer preview release, give or take.

Developer Preview – It’s available now as a release candidate. Items will spend extended periods of time in developer preview as we conduct user acceptance testing and accumulate sufficient usage to declare the API stable and ready for general availability. We will only make breaking changes to developer preview modules when we need to address unforeseen use cases or issues. Not all features, such as enhancements to the CDK CLI, will have a developer preview phase. In these cases, the tracking issue is moved directly to the Shipped bucket when released.

Shipped – It’s available now, fully supported by AWS, and we guarantee the API is stable and safe to use in production.

It’s important to note that items listed in the Researching and Working on it columns are often subject to breaking changes as we work through the desired developer experience. The AWS Construct Library API reference identifies these work-in-progress modules with stability banners to let you know when breaking changes are possible. While we think you’ll benefit from early access to new features, and want to hear your feedback, use experimental modules with care in your CDK projects.

How we prioritize items on the project board

We create a tracking issue for each CDK feature, AWS Construct Library module, and jsii-generated programming language. Tracking issues provide a brief feature summary and a consolidated view of the work scoped for the release. They include links to design documentation, implementation details, and relevant issues. Tracking issues are living documents that start from a basic template and grow more robust over time as we experiment and learn. You can easily find tracking issues by filtering on the management/tracking label.

We strongly encourage you to give a thumbs-up to the tracking issues of features that you need to make better use of the CDK. We’re listening, and this helps us prioritize the work we pick up next to serve you best.

If you’re new to the CDK and haven’t seen it yet, the CDK workshop is a great step-by-step tutorial to get you started quickly. There’s a workshop for each supported programming language, go check it out.

Thanks for your interest in the AWS CDK and happy infrastucture-is-now-just-coding!