Jeff Levine is a Solutions Architect for Amazon Web Services.

The benefits of blue/green deployments

Here are some of the advantages of a blue/green deployment:

So how do you set up your first blue environment? A best practice is to start with an in-place deployment. You can also start with an existing, empty Auto Scaling group.

An example of blue/green deployments

Let’s take a look at an example of how to use Auto Scaling groups to perform a blue/green deployment.

In the following figure, the example environment includes an Amazon EC2 instance that serves as a workstation for AWS CodeDeploy. A release manager or developer could use this workstation to deploy new versions of code. The blue environment consists of an Auto Scaling group that provisions two more instances to function as web servers. The web servers will initially contain the first version of an application and the AWS CodeDeploy agent. A load balancer directs traffic to the two web servers in a round-robin manner. 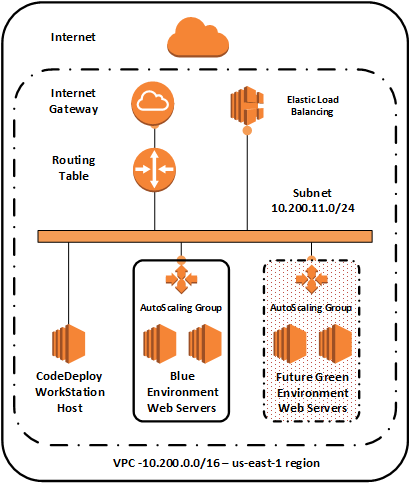 Prerequisites for building the example

Here are the things you will need to build out this example.

You will incur charges from AWS for the use of the underlying AWS services in this example. The Amazon EC2 t2.micro instances and Amazon S3 storage might be covered under the AWS Free Tier, depending on your eligibility. The resources provided in this example are for training purposes. Be sure to consider the security needs of your organization when implementing techniques similar to those described in this blog post.

AWS CodeDeploy enables developers to automate code deployments to Amazon EC2 and on-premises instances. The blue/green deployment option enables release managers to create a new production environment and makes it easier to roll back to the previous environment if problems arise. For more information about AWS CodeDeploy, see the AWS CodeDeploy documentation. You can get started in just a few clicks.

Enjoy life in the blue/green world!