AWS OpsWorks lets you deploy and manage application of all shapes and sizes. OpsWorks layers let you create blueprints for EC2 instances to install and configure any software that you want. This blog will show you how to create a custom layer for Docker. For an overview of Docker, see https://www.docker.com/tryit. Docker lets you precisely define the runtime environment for your application and deploy your application code and its runtime as a Docker container. You can use Docker containers to support new languages like Go or to incorporate your dev and test workflows seamlessly with AWS OpsWorks.
The Docker layer uses Chef recipes to install Docker and deploy containers to the EC2 instances running in that layer. Simply provide a Dockerfile and OpsWorks will automatically run the recipes to build and run the container. A stack can have multiple Docker layers and you can deploy multiple Docker containers to each layer. You can extend or change the Chef example recipes to use Docker in the way that works best for you. If you aren’t familiar with Chef recipes, see Cookbooks 101 for an introduction.

First, create a repository to store your Chef recipes. OpsWorks supports Git and Subversion, or you can store an archive bundle on Amazon S3. The structure of a cookbook repository is described in the OpsWorks documentation.
The docker::install recipe installs the necessary Docker software on your instances:

The docker::docker-deploy recipe deploys your docker containers (specified by a Dockerfile):

Then create a repository to store your Dockerfile. Here’s a sample Dockerfile to get you going:

Now you’re ready to use these recipes with OpsWorks. Open the OpsWorks console:

The Layer page should now show the Docker layer. However, the layer just controls how to configure instances. You now need to add some instances to the layer. Click Instances in the navigation pane and under the Docker layer, click + Instance. For this walkthrough, just accept the default settings and click Add Instance to add the instance to the layer. Click start in the row’s Actions column to start the instance. OpsWorks will then launch a new EC2 instance and run the Setup recipes to configure Docker. The instance’s status will change to online when it’s ready.

Once you’ve started your instances: 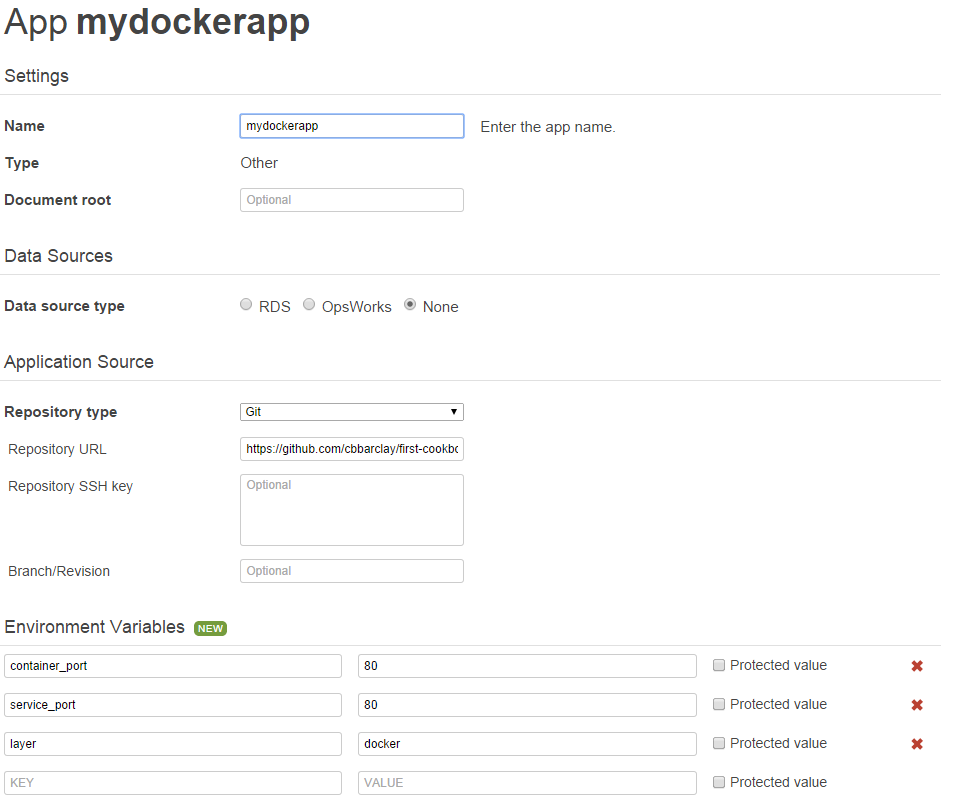 These instructions have demonstrated how use AWS OpsWorks and Docker to deploy applications, represented by Dockerfiles. You can also use Docker layers with other AWS OpsWorks features, including automatic instance scaling and integration with Elastic Load Balancing and Amazon RDS.
View Comments