Break Through on Twitch with the New GameOn Tournament Organizer

In March, we launched Amazon GameOn, a cross-platform competitive gaming service for developers. Today, we added a new feature – the GameOn Tournament Organizer.

GameOn Tournament Organizer is a Twitch extension that allows Twitch creators to generate tournaments inside the Twitch experience with a click of a mouse and invite their players to join directly from within the game. Twitch is the premier community for gamers with over 15mm daily active community members watching an average of 95 minutes of gaming content a day. When games are successful on Twitch, they reach and resonate with the most influential gamers. And, when you integrate the GameOn APIs into your game, you give thousands of Twitch creators the tools to easily challenge their viewers to fun competitions in your game.

GameOn Tournament Organizer opens up a new channel for net new player acquisition and drives incremental engagement for existing players. Twitch viewers can now play against their favorite Twitch creators, and Twitch creators get to deepen their relationship with their viewers. This means more people downloading and playing your game.

No matter what type of game you build, Twitch creators are able to create unique and fun experiences. Over the last few weeks, we partnered with Twitch creators like FooYa to test the extension with their community. When challenging her community in a fun, sidekick experience in an Ostrich Among Us tournament, a casual mobile title, FooYa saw impressive engagement: 30% of FooYa’s viewers downloaded the game and participated in the tournament, and each player played the tournament an average of 20 times vs the average of three plays. 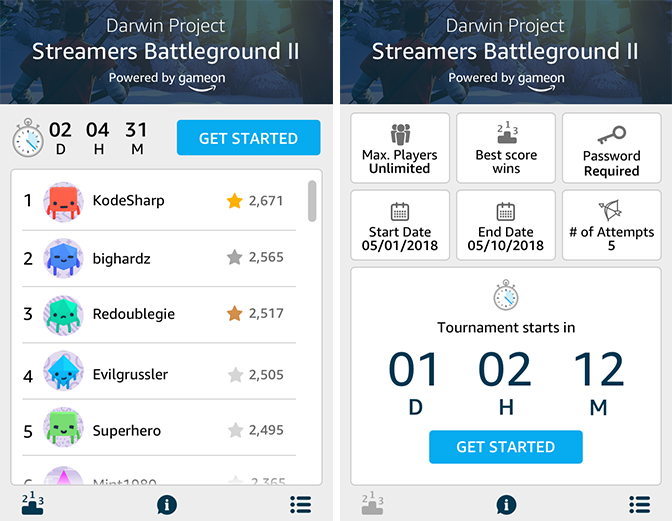 Make it seamless for Twitch creators

We built GameOn Tournament Organizer with Twitch creator and player simplicity in mind, so everyone can focus on enjoying your game. Creators can quickly spin up tournaments by adding the extension to their channel page and generate the tournament in your game with a few simple steps. No more waiting in lobbies, no more exchange of player data — just create and play.

FaZe Dirty is a member of the esports team FaZe Clan. He had been looking for new ways to engage his community.

“I use social media to engage my community, but I haven’t found that perfect way to get them involved in gameplay without taking up tons of time and slowing down the stream. With this extension, I will be able to keep a constant connection with my viewers.”

Integrate the GameOn APIs today and enable creators to host tournaments with your game on Twitch.

Scavenger Studios was able to quickly integrate GameOn into their battle royale game Darwin Project. “After initial discussions to learn about the use cases of the extension, we needed about one week of work from our online architect, UI/UX designer, and game designer to integrate GameOn Tournament Organizer.”

Here are three simple steps to get you on your way: