Analysis of large-scale genomic data is the foundation for developing new treatments that make personalized medicine a reality. However, access to these multi-petabyte datasets brings challenges in terms of managing storage and compute infrastructure. The scale and flexibility of AWS resources are ideal for such projects.

AWS has developed a Reference Architecture for compression and read back using PetaGene’s PetaSuite Cloud Edition and deployed it with a large biopharma client. By doing so, the client has reduced their storage footprint, sped up data ingress and egress, and accelerated analysis, while maintaining the data in a fully-accessible format. This blog describes this Reference Architecture and how to implement it.

Data from the Alignment/mapping and variant calling step arrives in variable size batches rather than as a constant stream. Once this step completes, output data is compressed using PetaGene and then ingested into a S3 bucket used for permanent storage as well a file catalog, which maintains metadata about each file. Once the Compression and Ingestion step is finished, the Bespoke QC and post-processing step runs a number of quality control checks and post-processing programs (peddy, verifybamid, STR expansion hunter, TelSeq, etc.), and finally, data is available to scientists for interpretation.

PetaGene’s compression software runs multi-instanced and multi-threaded and therefore scales to arbitrarily large batch jobs. There is no central server to create a bottleneck. PetaGene’s license manager only records billing and status information about the compressions, and presently can handle a compression request rate of more than 200,000 files per user per hour. PetaGene’s PetaSuite minimizes the cloud storage footprint and data transfer time, while maintaining maximum data access and processing performance.

The biopharma client initially analyzed 220,000 whole exomes sequences at a rate of 1,000 sequences per hour, resulting in 770 TB of BAM files. PetaGene’s PetaSuite lossless compression was then able to shrink their size by a factor of more than 4x at a rate of 10,000 files per hour, after which they were written to tiered long-term storage and subject to periodic retrieval. Using PetaGene’s PetaSuite, the client will reduce their storage and retrieval costs by more than $1 million over three years, even after taking into account the PetaGene fee, which is a fixed price per TB saved.

Subsequently, the client included the PetaGene compression step within the analysis pipeline, as described in detail below.

Architecture overview
The following diagram depicts an overall architecture that you can insert into a new or existing pipeline. Since PetaGene’s PetaSuite Cloud Edition runs well within a Docker container, we use AWS Batch and Elastic Container Services (Amazon ECS) to provision and auto-scale the compute and memory resources needed to perform the compression. We use AWS Simple Queue Service (Amazon SQS) to keep track of the work that needs to be performed, with a Lambda function that reads from the queue and then dispatches work to AWS Step Functions. Compression work can be instantiated in two ways: when the workflow that creates the file to be compressed finishes, the compression workflow is automatically started; or for compressions to be performed retroactively, a user can submit batches of compression jobs to run. 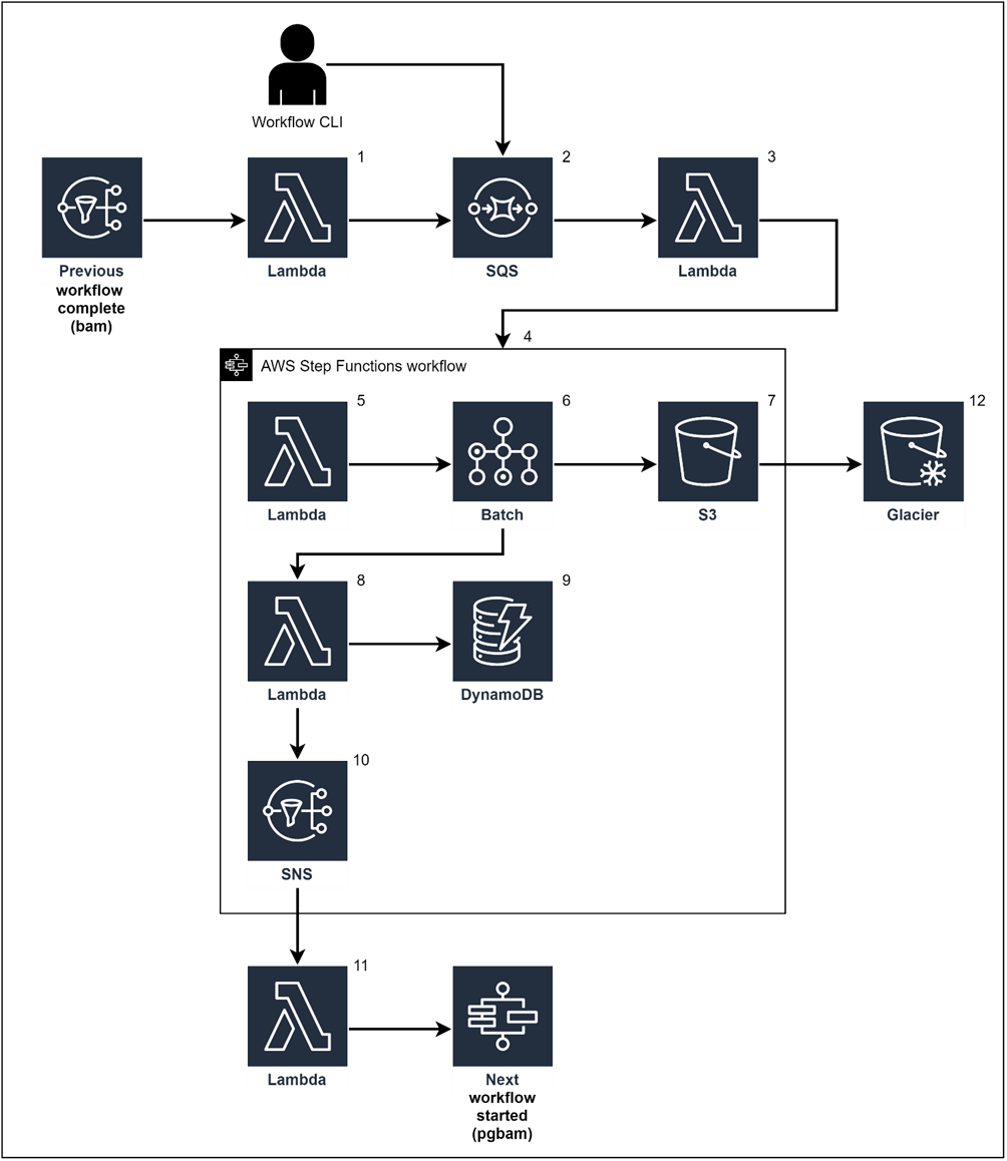 Here is a step-by-step walkthrough of the architecture shown above, with a basic overview of how each AWS service fits together to perform compression:

PetaGene’s PetaSuite initially performed retro-active compression of data that had already been processed. Now, the compression element is triggered automatically in the production pipeline handling new data, using the architecture described above.

Getting started
The architecture shown above can be deployed using AWS CloudFormation. We also create a container with PetaGene’s PetaSuite installed, and store this container in Elastic Container Repository (Amazon ECR). The numbers in parentheses below refer to the processing steps described above.

Container
Build a Docker container and upload to Amazon ECR. PetaGene’s PetaSuite is added with a few lines in the Dockerfile. Assuming Ubuntu as the base image:

Function (1) subscribes to an SNS topic, which indicates that the previous workflow has been completed. In our case, the previous workflow is the analysis process that generates a BAM file. The Lambda function reads the SNS messages and writes a new message to a SQS queue (2) with the message body containing the details of the file to be compressed.

Function (3) is triggered by a message arriving in the SQS queue (2) and invokes the compression workflow StepFunction. The input to the StepFunction is the message body content.

Function (5) writes the message content to a JSON file, which is stored in a known location in S3. This provides the batch job with a convenient method for receiving its work instructions.

Function (8) writes file metadata to a file catalog once the compression batch job is finished. The input to this function is the various metadata attributes that we want to store for each file. In our case, this includes file name, size, type, checksum, data created, and S3 bucket and key for the file. When finished, this function writes a message to an SNS topic (10) to indicate that the compression workflow has been completed.

Function (11) is an optional function, which can be used to trigger the next workflow in the pipeline. If you don’t have any further workflows to run, this function is not needed.

Batch script
When the batch container starts, the entry point is a Python script that retrieves the work instructions written to an S3 object by Function (5). This script includes a function, which uses a Python subprocess to invoke PetaGene’s PetaSuite:

The main function of this script does the following:

The “Configured rate per hour” is adjustable and is dependent on (i) the size of the EC2 instance since PetaGene’s PetaSuite compression is multi-threaded, and (ii) the number of EC2 instances that you have running concurrently. The architecture imposes no limit on this rate and can be configured to achieve your desired objective. For the client project described in this blog, the goal was to be able to compress all of the files in under two days. This goal was achieved using m5.2xlarge instances and running approximately 850 instances concurrently.

Specific features of PetaGene’s PetaSuite compression mean that the benefits of compression can be realized throughout the analysis process.

Collaboration is an important element of advancing genomics research. Thanks to PetaGene’s freely available access library PetaLink, the compressed data can be shared with third parties, who can read them as regular BAM files without needing to decompress first. This AWS-based Reference Architecture allows you to build partnerships and collaborate with other genomics innovators.