At Bayer Crop Science we are applying modern genomic and data science methods to the challenges of global food production. Our research routinely produces enormous volumes of raw data that must be processed quickly and cost-effectively. Automated analysis pipelines (also known as workflows) are crucial for making this happen.

For such workflows, AWS describes the power of using AWS Step Functions and AWS Batch for Genomics Workflows on AWS.  To abstract and simplify that architecture, and enable scientists to easily build their own analysis workflows, we have developed BayerCLAW (Cloud Automated Workflows).  Scientists create a simple YAML file, BayerCLAW automates the creation of all architectural components and implementation details.

At Bayer, we use BayerCLAW for genomics and ETL workloads; we expect it to be suitable for other scientific HPC applications, including high content screening, digital pathology/radiology, and computational chemistry workloads.  As such, we have released BayerCLAW as open source software on GitHub at https://github.com/Bayer-Group/BayerCLAW.

BayerCLAW consists of two main components: a workflow definition language, which describes a workflow as a series of shell script-like steps; and an orchestration engine, which runs submitted jobs through the pipeline. The motivations and technical implementation of BayerCLAW are outlined below.

Although we experimented with many of the existing automated analysis pipeline systems, we did not find any that met all our needs.  Thus, we developed BayerCLAW to meet the following five criteria:

Our users agree that BayerCLAW meets these design goals for ease of use, efficiency, and reliability:

“BayerCLAW has greatly increased our team’s productivity when creating pipelines by reducing deployment time, facilitating troubleshooting and most importantly being fun to use.”  – José Juan, data scientist

“BayerCLAW allows me to focus on the relationships between my steps and the logic of those steps, since the infrastructure details are handled for me.  It is also easier to get up to speed with others’ workflows as I can simply start by reviewing the stack YAML or execution diagram in Step Functions and drill down from there.”  – Andy, data engineer 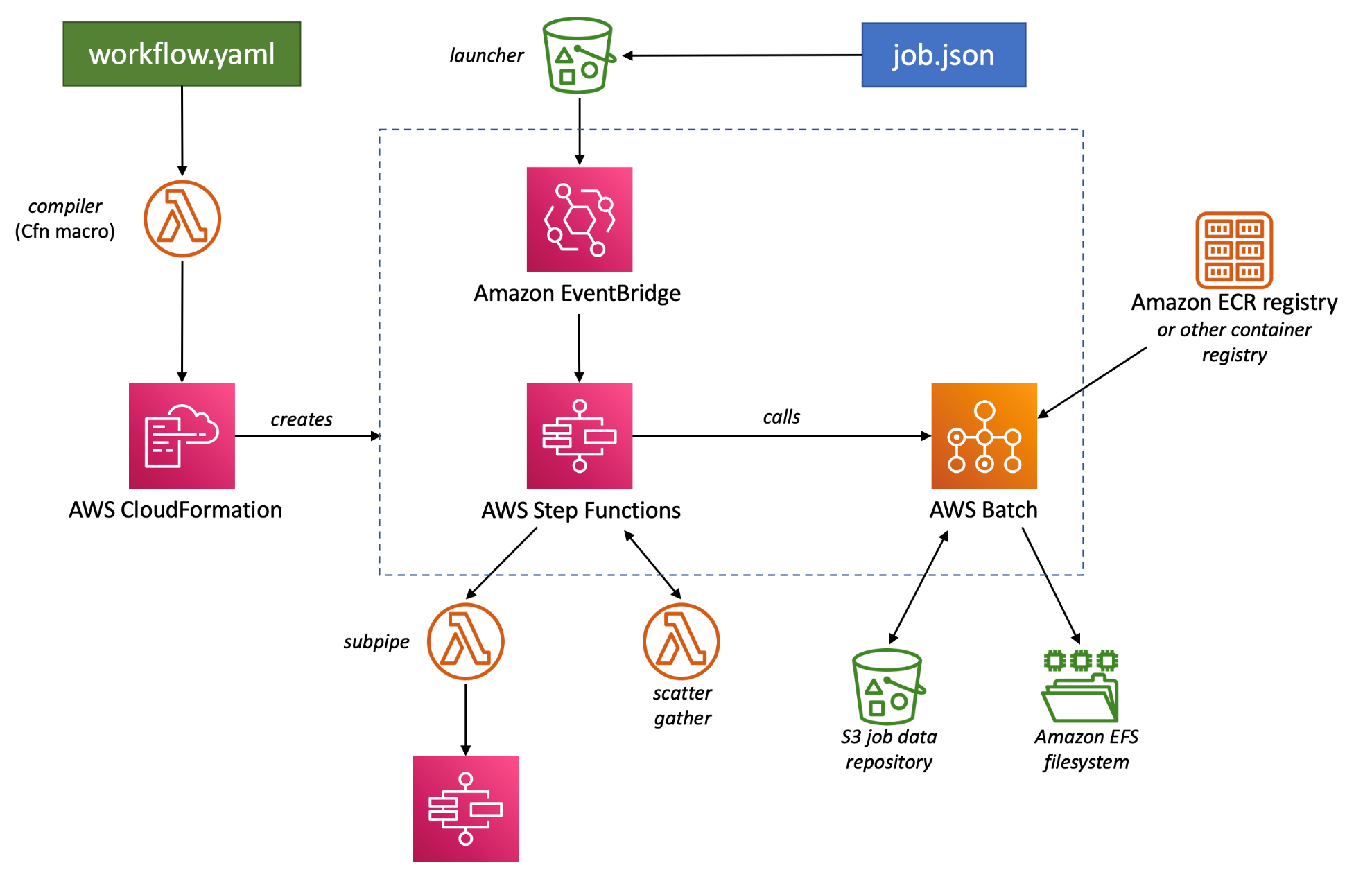 Building and running a workflow in BayerCLAW requires the following:

To execute a Workflow upload the job data file to the Amazon S3 launcher bucket.  A launcher bucket supports multiple state machines based on the prefix of the uploaded job data file.  Uploading the file triggers an Amazon EventBridge Rule, which initiates a Step Functions execution. Step Functions then executes the workflow as a series of AWS Batch jobs. Figure 2 describes the process of launching the workflow

The BayerCLAW runner program, which resides on each Batch job’s Amazon EC2 instance, downloads input files to the local disk, executes the step’s commands in a bash shell, and uploads output files to the repository.

You can track job executions using the Step Functions console. This provides a simple way to visualize the job status, and links to Amazon CloudWatch logs for individual steps. Figure 3 shows the AWS Console view of our workflow.

Workflows in BayerCLAW are defined using a YAML-based specification format. Below is a spec for a simple three-step microbial genome assembly and annotation pipeline:

Here are some of the important features of the workflow specification:

The Transform: line. This line is required at the top of every workflow spec. It tells CloudFormation to use BayerCLAW’s compiler Lambda to transform this spec into a CloudFormation template.

The params block. This block tells BayerCLAW the location of the job’s repository and, optionally, a name for the execution. Note the use of ${job.SAMPLE_ID} in the params block above: this tells BayerCLAW to look up the field named SAMPLE_ID in the job data file and substitute it into the strings provided. Using the sample job data above, the job’s name would be SAMPLE_12345 and the repository would be located at s3://microbial-genome-bucket/repo/SAMPLE_12345.

A detailed description of the BayerCLAW workflow language can be found at https://github.com/Bayer-Group/BayerCLAW/doc/language.md .

Scatter/Gather. In scientific computing, large but “embarrassingly parallelizable” computations are common. BayerCLAW therefore enables users to split a job into an arbitrary number of branches that run in parallel. This is done through the use of a scatter step, as shown below:

Here, it is assumed that a previous step has placed multiple files in the repository named contig1.fa, contig2.fa, etc.  The Unix-like glob contigs*.fa in the scatter field tells BayerCLAW to run the Annotate step on each of these files in parallel. When all of the branches are finished, paths to the output files are recorded in a JSON-formatted manifest file named after the name of the scatter step (e.g. Scatterize_manifest.json):

QC Checks. Often, it is a best practice to check the intermediate results of a workflow and stop the execution if the results are of poor quality. In BayerCLAW, Batch job steps can have an optional field named qc_check to specify conditions for early termination:

Here, the qc_checker program checks the output from the shovill run and writes its output to a JSON file named qc_out.json:

And more. Other important features of BayerCLAW include:

·       Native Step Functions steps, so a workflow can, for instance, execute a Lambda function or utilize the powerful Parallel step;

We have described BayerCLAW, a simple, reliable, serverless analysis pipeline orchestrator that we at Bayer Crop Science use to implement many of our automated workflows. While we have developed it in the context of genomic research, we believe it is suitable for use for other types of research as well. BayerCLAW is open source software and is available on GitHub at https://github.com/Bayer-Group/BayerCLAW . Extensive documentation, including installation instructions, a tutorial, and a comprehensive description of all of BayerCLAW’s features, can be found in the doc directory of the GitHub repository.