Amazon Cognito helps you create unique identifiers for your end users that are kept consistent across devices and platforms. Cognito also delivers temporary, limited-privilege credentials to your application to access AWS resources. In a previous post, I covered the basics of Cognito’s authentication flow. In this post, I will show the differences in that flow when using developer authenticated identities.

As covered in previous blog posts, a user authenticating through Cognito will go through a three-step process to bootstrap their credentials: 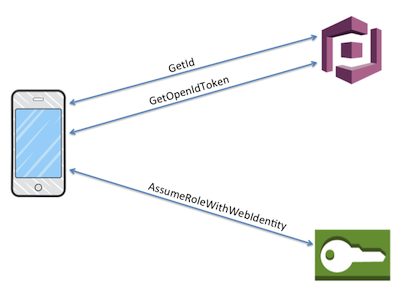 In the basic authflow, all three calls are made from the user’s end device.

With developer authenticated identities, we introduced a new API, GetOpenIdTokenForDeveloperIdentity. This API call replaces the use of GetId and GetOpenIdToken from the device and should be called from your backend as part of your own authentication API.

With this change, the authflow from the device becomes: 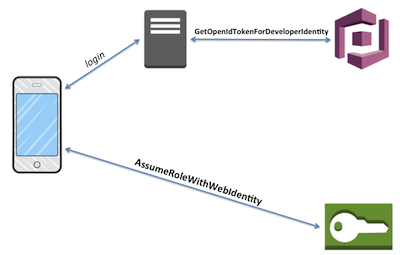 The AWS Mobile SDK has been updated to support this flow via the use of a new interface called AWSCognitoIdentityProvider. See the Developer Guides (iOS|Android) for information on implementing these providers.

As mentioned earlier, GetOpenIdTokenForDeveloperIdentity replaces the use of GetId and GetOpenIdToken from the device. Because this API call is signed by your AWS credentials, Cognito can trust that the user identifier supplied in the API call is valid. This replaces the token validation Cognito performs with public providers.

The API takes a number of fields, but only two are required:

As with public providers, supplying additional logins that are not already associated with an identity will implicitly link those logins to that identity. It is important to note that if you link a public provider login to an identity that user can use the basic authflow with that provider, but they cannot use your developer provider name in the logins map when calling GetId or GetOpenIdToken.

I hope this clarifies how Cognito authentication works with developer-authenticated identities. If you have any comments or questions, please free to leave a comment here or visit our forums and we will try to assist you.