Bastion hosts (also called “jump servers”) are often used as a best practice for accessing privately accessible hosts within a system environment. For example, your system might include an application host that is not intended to be publicly accessible. To access it for product updates or managing system patches, you typically log in to a bastion host and then access (or “jump to”) the application host from there.

In this post, I demonstrate how you can reduce your system’s attack surface while also offering greater visibility into commands issued on your hosts. The solution is to replace your bastion host by using Amazon EC2 Systems Manager.

Access to the bastion host is ideally restricted to a specific IP range, typically from your organization’s corporate network. The benefit of using a bastion host in this regard is that access to any of the internal hosts is isolated to one means of access: through either a single bastion host or a group. For further isolation, the bastion host generally resides in a separate VPC.

The following diagram illustrates this design: 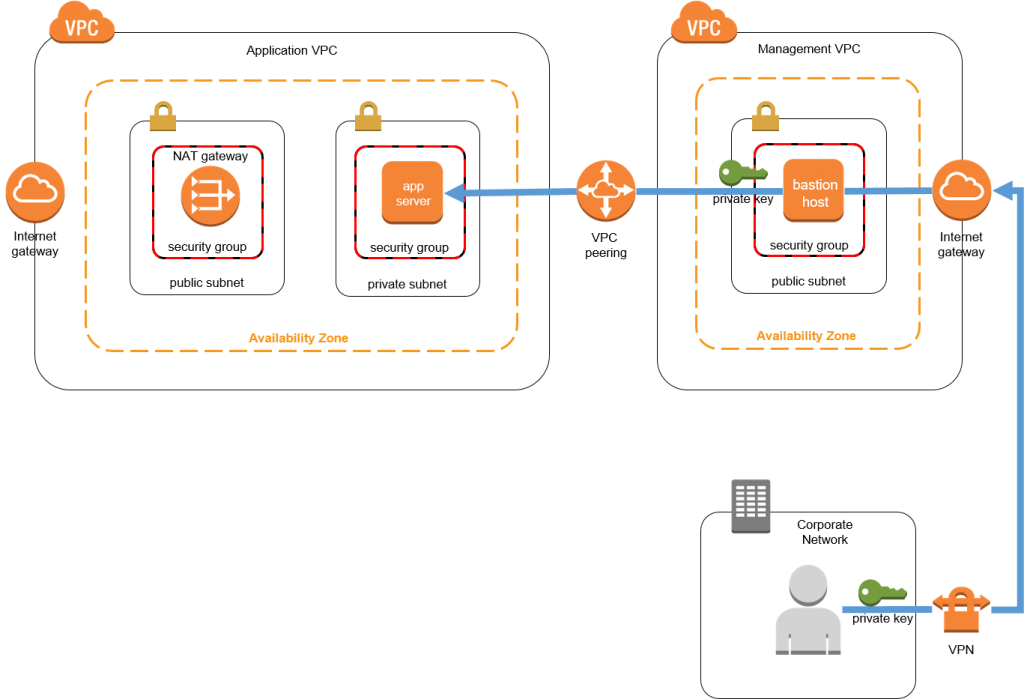 Because the application host resides in a private subnet, it is able to establish outbound Internet connections only through a NAT gateway that resides in the VPC’s public subnet.

To put all of this into context, say that you want to view the network interfaces for the application host. To do so, you would follow these steps:

The security controls in this system help restrict access to the application and the bastion host. However, the bastion model does have some downsides:

Systems Manager allows you to remotely execute commands on managed hosts without using a bastion host (you might know this feature as EC2 Run Command). A host-based agent polls Systems Manager to determine whether a command awaits execution.

Here are some of the benefits:

You are responsible for the costs of the resources that use Systems Manager, such as EC2 instances, SNS messages, and S3 storage.

About the Systems Manager Agent

The Systems Manager agent is an open-source executable that runs on supported versions of Linux and Windows (list of supported operating systems).

The agent assumes an IAM role to communicate with Systems Manager. This role must be associated with a policy that grants it sufficient permissions to interact with Systems Manager and other ancillary services. Fortunately, IAM provides a managed policy called AmazonEC2RoleforSSM that defines these privileges for you. Among other things, it allows the agent to get and reply to Systems Manager messages, publish CloudWatch metrics, and write log files to S3.

The agent communicates with Systems Manager over HTTPS, which means that the communication between the host and the service is encrypted, and security groups don’t require special egress rules.

Now that you’ve seen the benefits of Systems Manager, you can see how the architecture is affected by the changes.

The new architecture, seen in the diagram below, shows how the use of Systems Manager eliminates the need for the bastion components and helps simplify the system architecture. Users no longer interact directly with the application hosts; Systems Manager is the broker that facilitates the execution of commands: 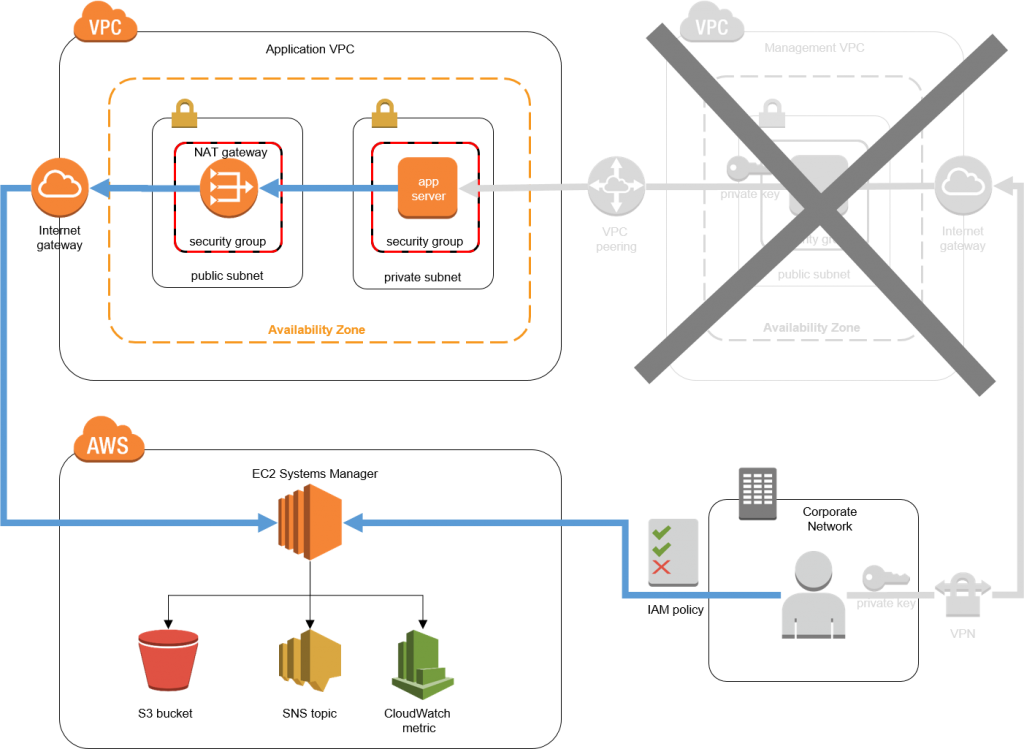 In this design, the Systems Manager agent resides on the application host, which qualifies the host as a “managed instance,” meaning that it is eligible to receive commands from Systems Manager. To execute a command, create a new command request in Systems Manager and target this specific instance (or a group of instances to execute the command on multiple instances).

When you create the command request, you can optionally choose an S3 bucket in which to store the results and an SNS topic to which to send a notification of the execution. You can also optionally create a CloudWatch event that is triggered on Systems Manager events.

The link launches the stack in Northern Virginia. SSM is available only in some regions.

Also, some resources incur costs as long as the resources are in use.

In this section, you use Systems Manager to issue the same “ifconfig” command that we used in the previous section to view the network interface configuration of the application host.

First, you specify an instance on which to execute the command. After Systems Manager executes the command, it reports the status, display the output, stores the output history in an S3 bucket, and sends you an email notification indicating that it executed the command.

That’s it! You successfully executed a command on your application host without using a bastion host or accessing the host directly. Further, you have a full account of the command execution. This allows you to audit the commands and use your existing IAM framework to control access to the hosts, without having to manage private RSA keys. For more information, see Configuring Access to Systems Manager.

Most AWS services include a robust API that allows you to automate service interaction. Using the console is a good way to learn and understand the procedures for remote command execution, but automating this ability provides a reliable and consistent means of governing user access to this capability.

For example, many organizations use on-call staff rotation for supporting production infrastructure. Because Systems Manager supports native IAM integration, you can grant or revoke Systems Manager invocation privileges based on who is on call for a specific period of time.

In the example from the previous section, you executed an ad hoc command in the console. Realistically, you would execute a script that is stored in an access-controlled source code control repository and incorporate this capability into your existing support workflow framework to track requests, approvals, and rejections. Using the AWS CLI, AWS APIs, and AWS SDKs, you can also automate the use of Systems Manager to be used without manual intervention.

In this post, I demonstrated how to remotely execute commands on your EC2 instances and on-premises hosts while decreasing your system’s attack surface and simplifying your architecture. You can use AWS services for identity and access management, logging, and alerting to give insight into the commands being issued on your hosts.

You might have some use cases for SSH or RDP that this solution might not satisfy, such as SSH tunneling or proprietary software that relies on SSH. Hopefully, this post gave you some alternative ideas about how to access and manage your hosts.

I welcome your comments or questions below.

Rob Barnes is a cloud security architect for AWS Professional Services. He works with our customers to address security and compliance requirements through automation.