How to integrate Linux instances with AWS Gateway Load Balancer

When I meet with customers and discuss AWS Gateway Load Balancer (GWLB), I often get asked for suggestions regarding integrating it with their existing Linux appliances. GWLB utilizes GENEVE encapsulation with some important custom metadata, which doesn’t natively work with either Linux or Linux’s GENEVE module (which is designed only for Ethernet (Layer 2) packets, and thus can’t handle the IP (Layer 3) packets that GWLB sends). These applications can range from firewalling appliances, to email inspection, deep packet inspection, and specialized Network Address Translation (NAT) solutions – anything that must be able to see traffic as a ‘bump in the wire’. Several posts have discussed the mechanisms behind GWLB, including this one, that go into the technical details. Previous posts, such as this, talk about a way to use Suricata’s built-in GENEVE handling to support that system using GWLB.

This post presents a sample handler that implements Linux virtual Layer 3 interfaces (using Linux’s TUN support, explained here) to handle the GWLB connectivity. This leaves customers free to focus on building their own inspection, monitoring, or any other logic they like that expects to work with normal Linux-based networking interfaces.

The example code that implements this solution is now posted here and it’s called “gwlbtun”. It handles all of the interaction details with GWLB, the GENEVE encapsulation, and packet handling requirements. This post provides examples on using gwlbtun to implement traffic shaping and NAT’ing. However, anything that can work on network traffic can be used with gwlbtun.

First, let’s look at what the gwlbtun application does. It runs as a user-space program, listening for incoming GENEVE packets from the GWLB. When it sees packets coming in from a new GWLB endpoint, it creates two new tunnel interfaces, named “gwo-(string)” and “gwi-(string)”, where the string is the base-60 encoded GWLB endpoint ENI ID. The “gwi” (for ‘gateway inbound’) interface provides the packets coming in from the endpoint, decapsulated, and appearing as the original L3 packet that the gateway endpoint received. After processing, a utility can opt to let the packet continue through by letting it go through the “gwo” (for ‘gateway outbound’) interface. The user space application listens to this interface, and it will re-encode the packet in the correct flow’s GENEVE headers, and then send it back out to the GWLB to continue its path. The simplest deployment, with a single endpoint and traffic flowing bi-directionally through GWLB, can look like the following drawing: 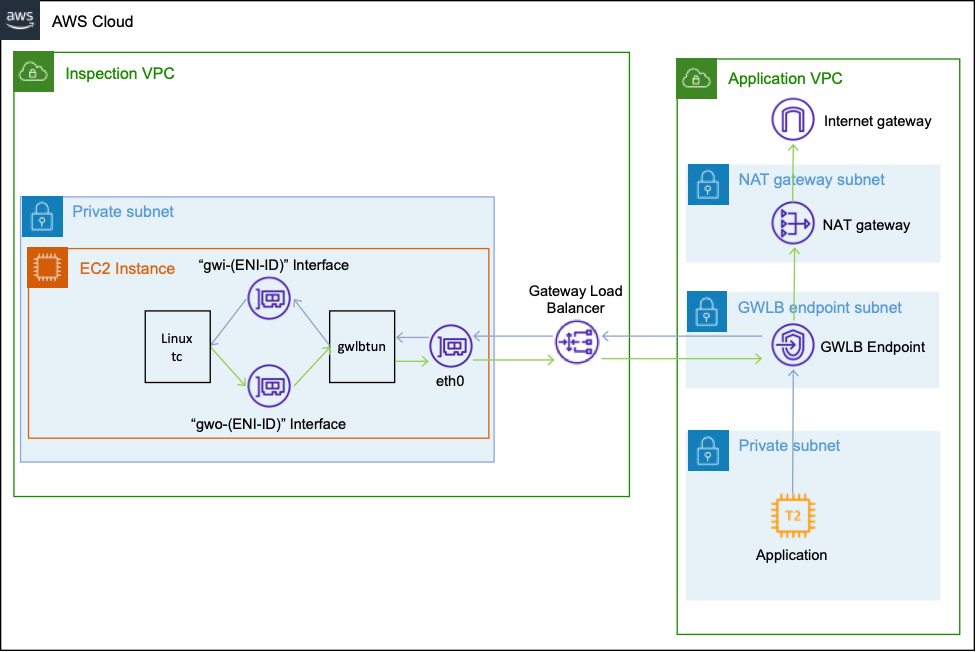 We sometimes refer to this layout type as “1-arm” mode. This is because there is only a single way that traffic can flow in and out of the Inspection VPC. This post covers the alternative “2-arm” mode later.

The gwlbtun software handles every detail of the GENEVE handling. Furthermore, it takes a couple command line arguments that specify scripts or programs launch when setting up new endpoints, as can be seen in its help:

The -c and -r arguments allow a user-provided script to trigger on the new tunnel creation or destruction, with gwlbtun providing as inputs what is happening (“CREATE” or “DESTROY”), the interface names that gwlbtun has already created or is about to destroy, and the original ENI ID should scripts need that information. Those scripts can set up any networking or security constructs that are desired. The “example-scripts” directory contains several examples to serve as starting points.

Starting simple – Pass the traffic through

The most basic example script, named “create-passthrough.sh”, simply sets up a basic traffic shaper that mirrors from the input back to the output:

These commands do the following:

This implements the 1-arm drawing that’s shown above, using the Linux native traffic control (tc) functionality. Understanding tc is not required for gwlbtun to operate, and later examples don’t use it, but this is an example of what is possible. Customers can extend this to implement QoS, rate shaping, or other similar mechanisms. Furthermore, the main page for tc gives many examples of schedulers, Random Early Detection (RED) dropping, and other functionality. Customers may also find the documentation here for understanding tc. It’s a useful tool to have in the networking toolbox.

In the Gitlab repository, there’s an AWS CloudFormation script that sets up this topology, called “example-topology-one-arm.template”. By deploying that, and then using AWS Systems Manager to connect to our instances, we can see what’s happening.

These lines are indicating that the CloudFormation template successfully deployed gwlbtun onto our instance via the UserData script that was included in it, and that it has started. The log lines show that it has auto-detected the traffic coming from our Application host, and it has created the two virtual interfaces “gwi-g0W4R5VOKSp“ and “gwo-g0W4R5VOKSp“ for use. Then, it called the “create-passthrough.sh” script to enable everything.

We can verify that this is working by using Systems Manager to connect to the Application instance. Since this requires network connectivity, and the only connectivity is via GWLB and gwlbtun, it’s a good test case:

Leaving this ping running, we can do a tcpdump on the eth0 interface of our gwlbtun instance to understand what’s happening from our application. The application has taken the IP address 10.20.0.60 for this example. Capturing only one ping and its reply, we see the following:

Fortunately, tcpdump (along with similar tools like Wireshark) understand GENEVE and help decode some of the data. Looking at the captured packet line, along with a diagram of the packet, can help understand what tcpdump is telling us:

Looking at this packet from right to left can be easier. GWLB has encapsulated the original ICMP packet, from 10.20.0.60 to 8.8.8.8, as shown on the far right. One layer up is the GENEVE header that GWLB added. Gwlbtun records the options inside of the header (the ENI ID and Flow Cookie) to be able to re-apply them when sending traffic back out toward GWLB. GWLB added the outer UDP header to send the traffic to our gwlbtun instance.

Next, we inspect the same packets, decapsulated, on the gwi interface:

This is done along with the packets on the matching gwo- interface:

These packets match with the encapsulated packets seen earlier. However, they’re now native IP packets, with the GENEVE encapsulate handled by gwlbtun. Finally, we can get some statistics from gwlbtun itself by querying its status page, which is running on port 80. This is also used for the load balancer’s health check target, serving both roles.

This page provides some interface statistics, along with the number of flows that gwlbtun currently has cached. The cache is used to re-apply the GENEVE headers as required by GWLB on traffic egress. It will expire records out of its cache after 350 seconds of inactivity. Gwlbtun will return a 200 response code if everything is Healthy, and a 503 if there’s a problem. Therefore, a target group can direct traffic appropriately.

The next example script, named “create-nat.sh”, sets up NAT’ing for the incoming traffic, and routes it out the instance’s native eth0. The return traffic is de-NAT’ed by the instance and routed directly back to the source instance. It doesn’t go back through GWLB (again because GWLB is a ‘bump in the way’ – the outer 5-tuple can’t be changed, which NAT’ing does). Transit Gateway can process this return traffic (as shown in the following), but any method that allows the network traffic through (VPC peering or others) will work. This topology is sometimes called “2-arm” mode: 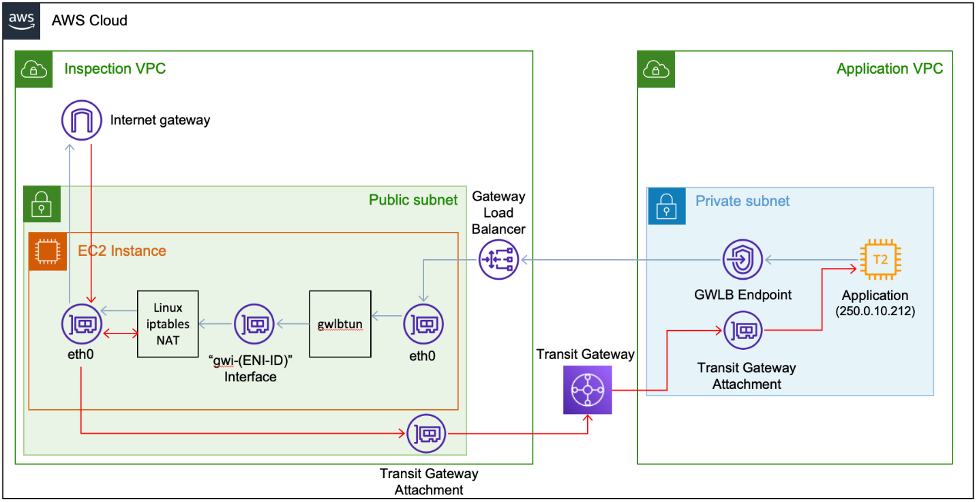 The contents of the “create-nat.sh” script is as follows:

This script does the following:

Line 1: Standard bash script header.
Lines 3-4: A note that since this instance is doing NAT’ing, we must disable AWS’s default Source/Dest check for Amazon Elastic Compute Cloud (Amazon EC2) instances.
Lines 6-7: Echoing out that the script has fired and what its parameters are. This is for informational purposes only.
Lines 9-10: Create NATing (called MASQUEADE by the Linux kernel) from the gwi- interface (passed by gwlbtun as $2 to the script) to the instance’s native eth0 interface.
Line 12: Make sure that the kernel’s IP packet forwarding is enabled (it is disabled by default).
Line 13: Disable the kernel’s Reverse Path Filtering on the gwi- interface.

The note about Source/Dest check is typical for NAT’ing applications inside of AWS. The disabling of the rp_filter on the gwi interface is needed because this tunnel interface doesn’t have an IP address of its own assigned to it (nor does it need one). Therefore, incoming traffic would normally be dropped by the kernel’s rp_filter.

Setting up our test 2-arm environment as above – with our “Application” at IP address 250.0.10.212 doing a ping to 8.8.8.8, and doing a packet capture on the gwlbtun’s eth0 showing the incoming GWLB packets – helps explain what GWLBTun is doing with the above NAT script. First, let’s inspect the incoming GENEVE packets, which appear as UDP port 6081 traffic on eth0:

Next, inspect the decapsulated packets on the gwi interface:

Here, you can see that the gwi- has had the outer IP header, outer UDP header, and GENEVE header removed by gwlbtun. Furthermore, the original packet is presented to the OS for processing.

This same system can work for multiple GWLB endpoints if the original IP addresses do not overlap, or if you use advanced Linux routing techniques to implement multiple route tables to support the overlapping IP space. For example, with two VPCs: 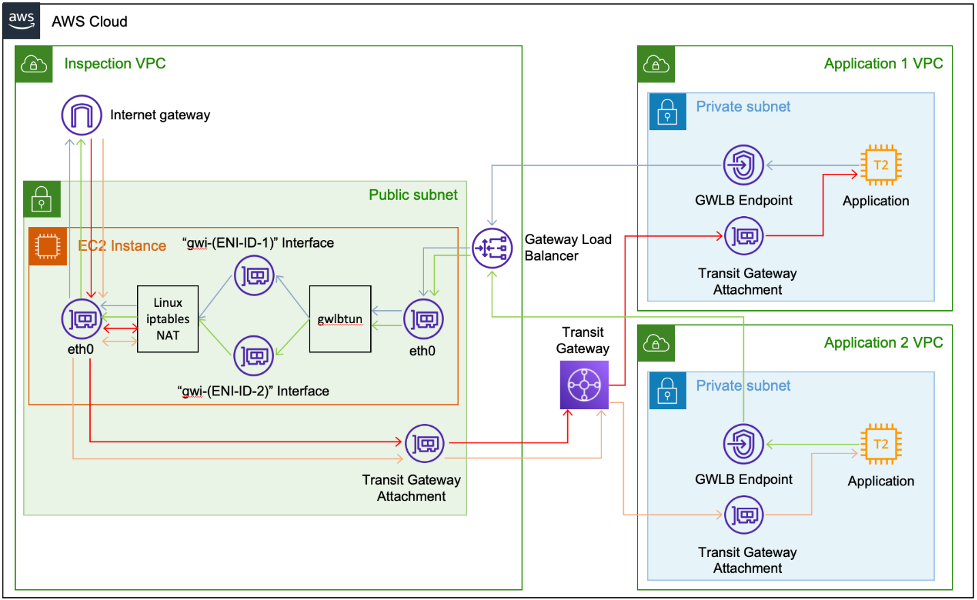 This is the same overall traffic flow as the single VPC NAT model described above. The gwlbtun software manages the fact that there are now two separate endpoints from the same load balancer coming into it. Then, it creates a second pair of gwi- and gwo- virtual interfaces. The NAT examples don’t use the gwo- interfaces, so the drawing doesn’t show them. You may also use multiple GWLBs, pointing to the same gwlbtun instance, and it will handle that scenario as well. Modern Linux kernels don’t have any typical limits on the number of interfaces that can be created, and thus the number of endpoints that gwlbtun can manage. The limiting factor will be the RAM and CPU of the instance itself to process the traffic.

The GitHub repository includes a “example-topology-two-way.template” file in the example-scripts folder. This is a CloudFormation template that you can deploy that sets up the first topology pictured above (“1-arm” mode). It also lets you try things out. The template depends on Systems Manager to connect to the instances. If you haven’t enabled this on your account, simply:

This will take a few minutes to complete. Alternatively, you can add in a small Amazon EC2 instance in the Application Public subnet, and then SSH to the other hosts from there.

To avoid incurring future charges, delete the CloudFormation stack that was created.

AWS Gateway Load Balancer allows a centralized location for packet filtering, shaping, or other traffic manipulation functions. The GWLBTun program handles the work of managing the interface to GWLB. This lets you concentrate on the logic that you want to implement, using standard Linux utilities and interface handling.

Andrew is a Solutions Architect at AWS with a focus on networking. Prior to AWS, Andrew was a lead networking engineer for cable ISPs and large universities. He enjoys solving technical challenges that mix networking architecture, engineering, and programming.