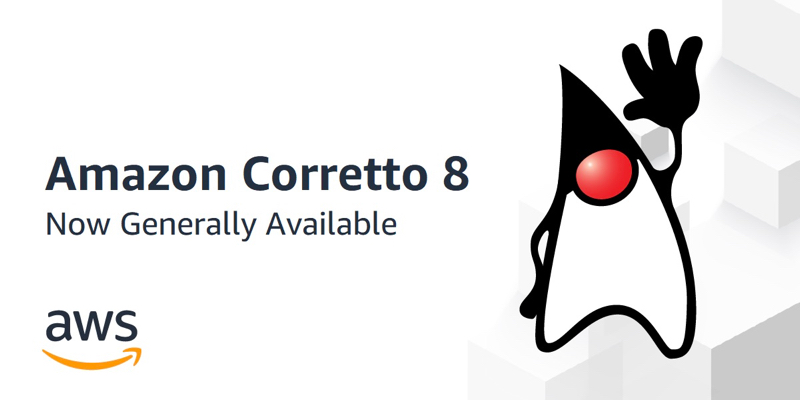 Amazon Corretto 8, a no-cost, multiplatform, production-ready distribution of OpenJDK, is now Generally Available (Corretto 8 had been in preview since we announced it in November, 2018). Amazon runs Corretto internally on thousands of production services. We at Amazon are committed to keeping Java free.

Since preview, we’ve listened to our customers and have made changes described in the change log, including updating the OpenJDK version to 8u202. A much more comprehensive list of platforms is now supported, including Amazon Linux 2 x64 and experimental support for aarch64, the x86_64 platform for RPM-based Linux using glibc 2.12 or later, the x86_64 platform for Debian-based Linux using glibc 2.12 or later, x86 and x86_64 for Windows 7 or later, and x86_64 for macOS 10.10 and later. In addition, there’s an official Docker image for Corretto.

You can easily get started with the Docker image:

Customers have expressed huge interest in Corretto, and several have started the migration journey. Jeet Kaul, Vice President of Engineering at FICO, said, “At FICO, we have been leveraging OpenJDK for many of our services. With Amazon Corretto, we are able to deploy Java not just for the cloud, but across all our deployments and multiple operating systems, with the knowledge that Amazon and the community stand behind OpenJDK. We have been evaluating Corretto since preview, and replacing our Java runtime has been seamless.”

Amazon will distribute security updates to Corretto 8 at no cost until at least June, 2023. We encourage you to run your Java applications using Corretto. You can download Corretto 8 from aws.amazon.com/corretto, and learn more about it by reading the Corretto docs. Feel free to ask questions on stackoverflow or on Twitter via @awsopen.

We are working on Corretto 11 builds corresponding to Open JDK 11 and will release with time for testing before April, 2019.

We’re thankful for the community’s input so far, and look forward to working with you further on Amazon Corretto!