Dgraph on AWS: Setting up a horizontally scalable graph database

This article is a guest post from Joaquin Menchaca, an SRE at Dgraph.

The language used to interact with Dgraph is GraphQL and our variant called GraphQL+-. This gives apps access to the benefits of GraphQL directly from the database.

Dgraph has client integrations with official clients in Go, Java, Python, JavaScript, and C#; and community-supported clients with Dart, Rust, and Elixir. Dgraph users also can use any of the tools and libraries that work with GraphQL.

Getting started with Dgraph locally on your own computer, where you can quickly model your data in Dgraph and build your app, is easy. When you’re ready to deploy this to a production environment, you’ll want to deploy Dgraph to the cloud. You can horizontally scale Dgraph across multiple machines for high availability and data sharding.

In this article, we’ll show how to set up a resilient highly available Dgraph cluster on AWS.

Dgraph is deployed as a single binary with no external dependencies. You can use the same binary to run all of Dgraph. The official Dgraph Docker image simplifies deploying to Kubernetes, where you can set up a multi-node highly available Dgraph cluster.

We will need at least one Zero and one Alpha to run Dgraph. There can be multiple Zeros and Alphas running in groups as a cluster. There is always a single group of Zeros and one or more groups of Alphas. Each group is a Raft consensus group for high availability and consistent replication.

Dgraph is resilient to any one of these instances failing. The cluster remains available for users to read and write their data. Distributed systems can fail for a myriad of reasons, and these failures shouldn’t make our backend go awry. As long as the majority of a group remains up, then requests can proceed. More specifically, if the number of replicas is 2N + 1, up to N servers can be down without any impact on reads or writes. Groups are odd-numbered for a quorum.

Although Dgraph can run on a cluster of nodes for high availability, an orchestration tool is necessary for health checking, self-healing, storage volume management, and setting up the network. The Kubernetes platform provides all of this, making it the ideal platform to host Dgraph.

Kubernetes maintains Dgraph’s resiliency as it constantly monitors Dgraph instances for readiness and liveness, and it can automatically move instances off of unhealthy worker nodes and run them on healthy ones. Kubernetes manages stateful apps like Dgraph with StatefulSets. Every Dgraph process is deployed as a Pod. In StatefulSets, Kubernetes gives each pod the same hostname identity and persistent volumes even when it moves to different worker nodes. If a worker node goes bad or if a Dgraph process gets restarted, then the pod will restart on a healthy worker node and re-sync the latest changes from replicated peers. Even when a pod restarts, Dgraph is available to process all requests on the rest of the healthy nodes.

The illustration below shows what the Dgraph Stateful Set (sts) as it relates to other components. This includes three pods and corresponding allocation of storage, called pvc (persistent volume claim) that comes from a persistent volume (pv). Alongside this, we deploy a service (svc) resource that will route traffic to one of three highly available pods. 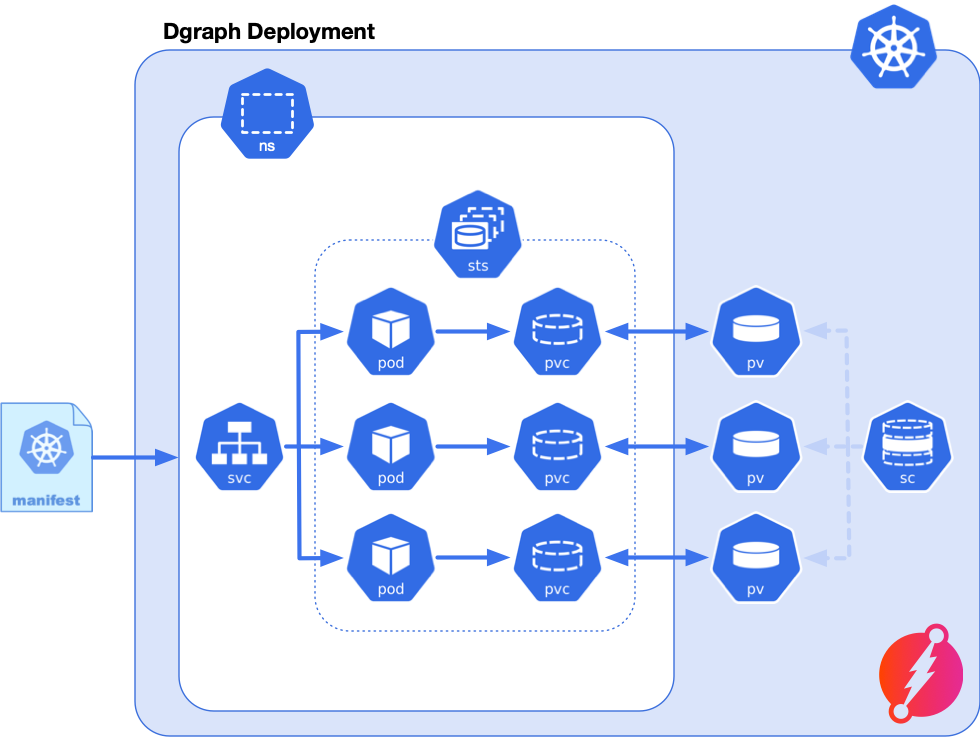 Creating a Kubernetes cluster on AWS 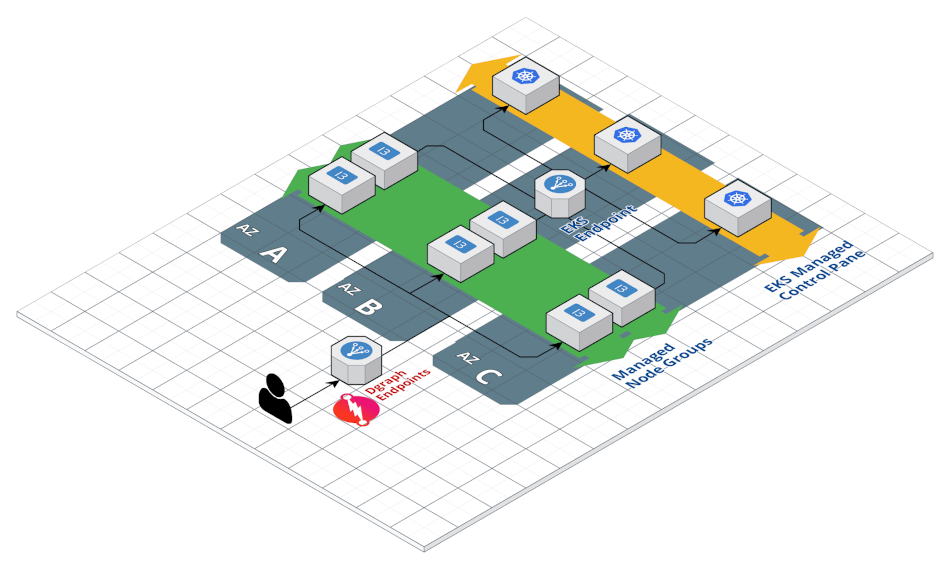 The simplest way to get started immediately with building an Amazon EKS cluster is to use eksctl, a command-line tool to deploy Amazon EKS using AWS CloudFormation stacks. This tool automates a lot of complexity involved with provisioning Amazon EKS. In addition to installing eksctl, we also need to install kubectl to interact with Kubernetes once it’s up.

We have an example eksctl configuration that can be used for this exercise; download the example from GitHub.

We can create the cluster with the command:

This configuration creates a three-node Amazon EKS cluster in the us-east-2 region. The process takes about 20 minutes to fully provision the Kubernetes infrastructure. Once the process completes, we can test our cluster with the following command:

With Kubernetes up and running, we can now deploy Dgraph.

Now that we have a Kubenetes cluster with Amazon EKS, we can deploy a highly available Dgraph cluster on Kubernetes.

We have an example manifest, dgraph-ha.yaml, to get us up and running with a high availability Dgraph cluster. We can run it in Kubernetes by running the following command:

This Kubernetes manifest will create a Dgraph cluster with three Alpha pods and three Zero pods, as well as a pod for the web client Ratel. The Alpha and Zero pods are run via StatefulSets with a persistent Amazon Elastic Block Store (Amazon EBS) volume to store the data, so they can keep the same data around even if they’re restarted or rescheduled to different machines. The web client Ratel is stateless, so it is a Deployment with no extra persistent disks needed.

The manifest does not expose any of these services to the public internet for security reasons. If we would like to add endpoints, we can modify the manifest to add these changes, such as changing the service type to LoadBalancer, or adding an Ingress resource.

The following Kubernetes diagram is similar to diagrams used in the Kubernetes basic tutorial and other Kubernetes documentation. This is an overview of the components involved when deploying Dgraph on Kubernetes. The Zero and Alpha pods deployed by a StatefulSet controller, as mentioned previously, will be distributed across the cluster and have an attached disk, indicated by the purple disk icon. The Ratel pod deployed by a Deployment controller will only have a single pod in one of the tree worker nodes and does not have an attached persistent disk. 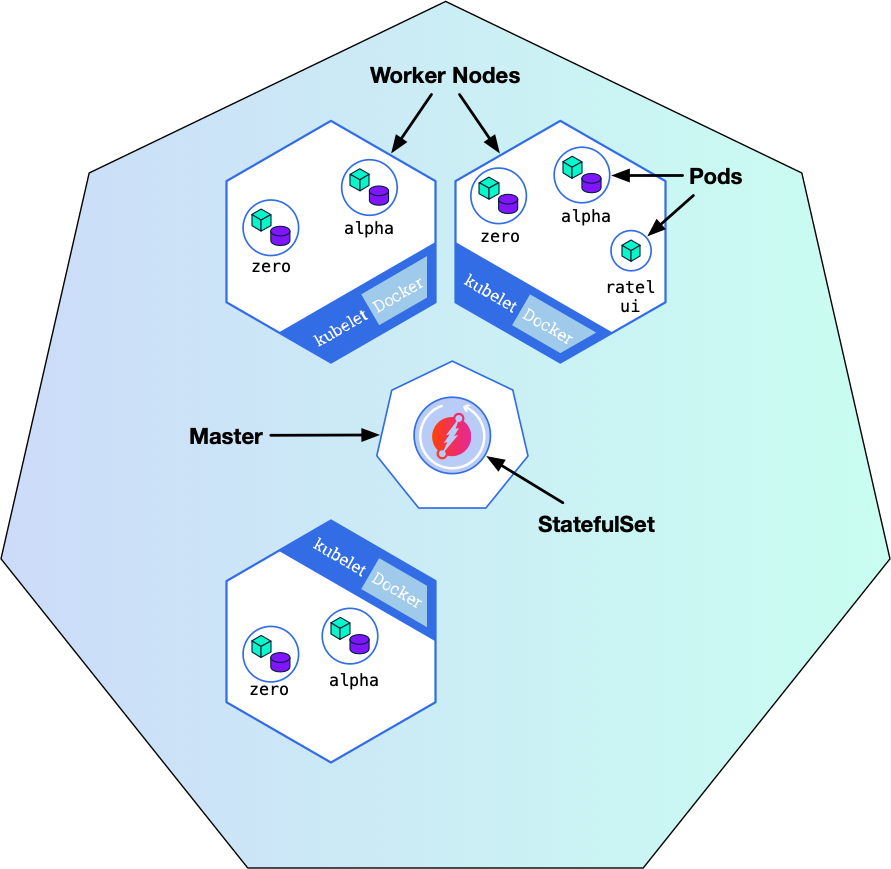 We can view services that are running with the following command:

This will show something similar to the following:

We can make these accessible locally via localhost using the kubectl port-forward command. For this section, we will open up multiple terminal windows or tabs.

In a new terminal, run the following command to access an Alpha pod through HTTP:

In a new terminal, run the following command to access a Ratel pod through HTTP:

We can access Ratel by typing http://localhost:8000/ in a browser. We will be presented with three options; select Latest.

For the Dgraph Server Connection, select http://localhost:8080, Connect, Continue. Now we should have a window that shows something like: 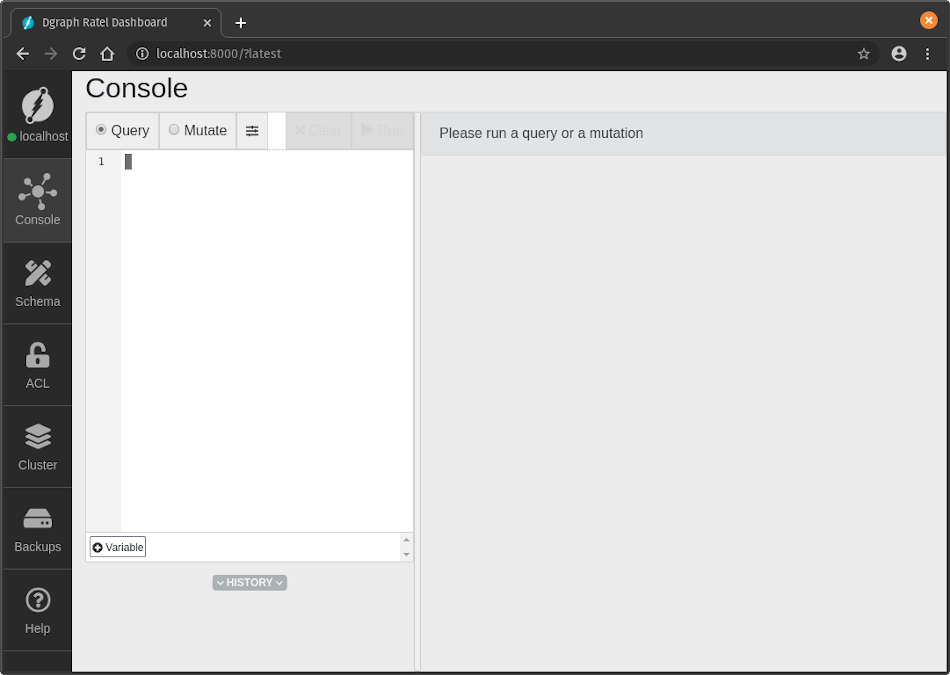 If we already have mutations and queries in mind, we can run these now. This example is similar to our Getting Started Step 2: Run Mutation documentation.

Select the Console and Mutate radio button, copy and paste the text below, and then select the Run button.

Then we can alter the schema by selecting the Schema button on the left, and then the Bulk Edit button. In this edit box, copy and paste the text below, and then select Apply Schema. 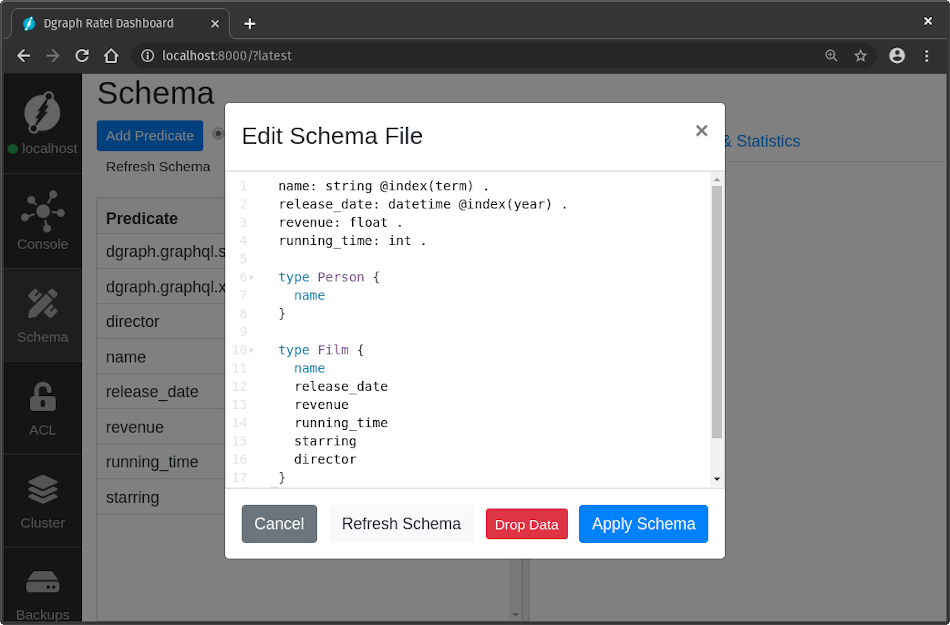 Now we can do a query. Select Console, Query, then copy and paste the following:

After the results return, we are shown the JSON and the graphical representation of the graph. This should look something like the following: 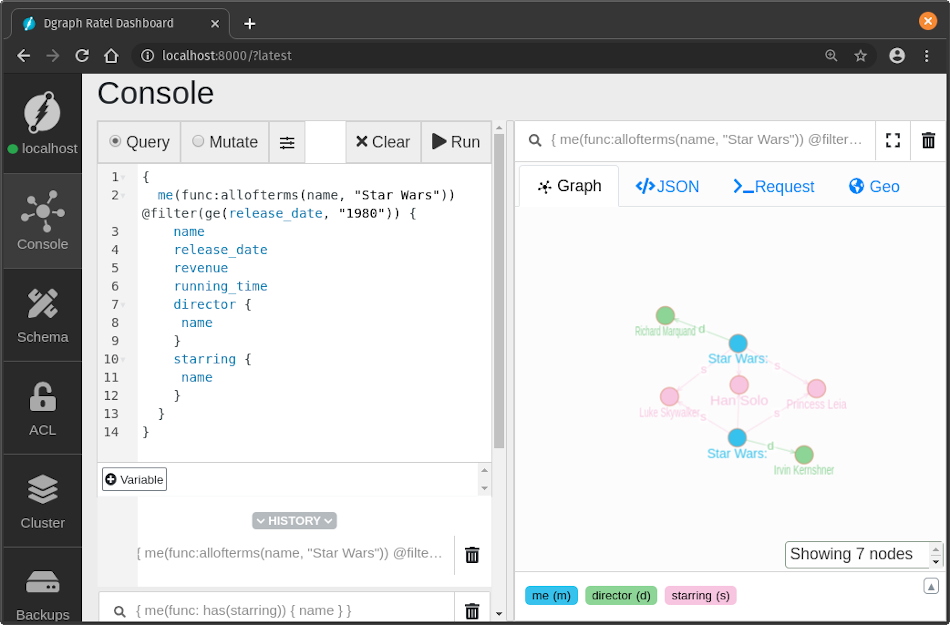 We also can view the equivalent result in JSON: 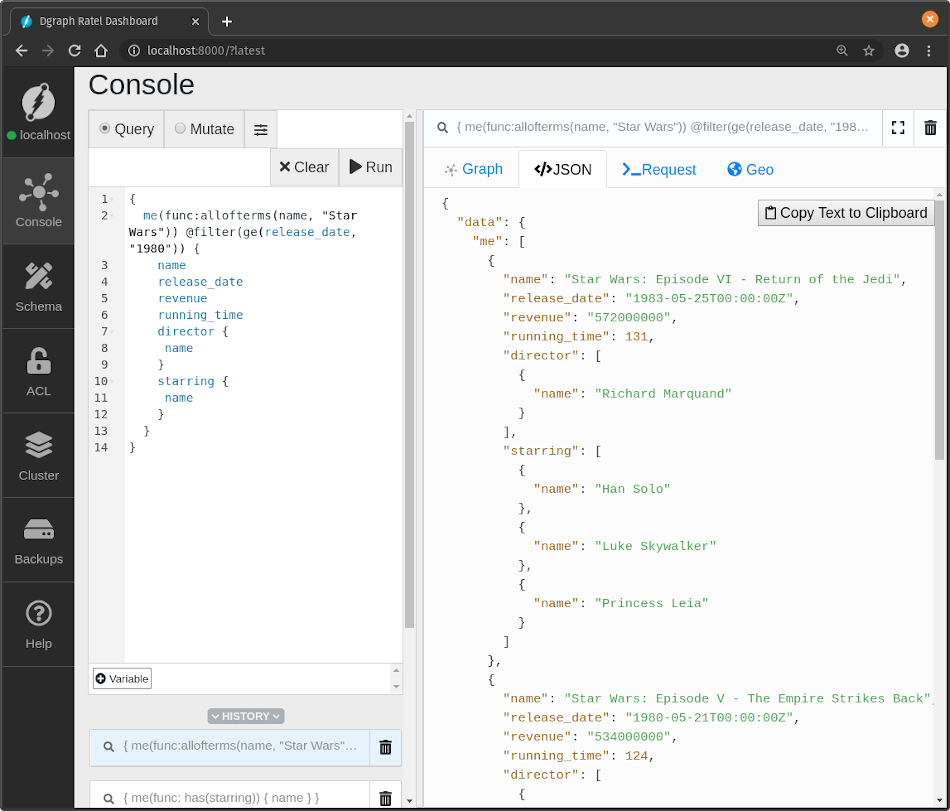 And that’s it. We have run our first mutation and ran a query to find the relationships between the movies actors played in and the directors of those movies.

Once finished with the Dgraph cluster, we can remove it from Kubernetes with the following command:

If we are finished with the Amazon EKS cluster that we deployed with eksctl, we can remove this with:

Refer to our documentation for additional information on this deployment topic, and other Dgraph topics and links to tutorials. You can join the Dgraph community, where you can post questions and share your experiences with Dgraph. 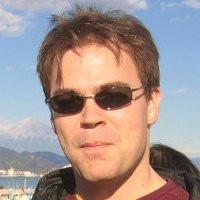 Joaquin is an SRE at Dgraph Labs. He started early in QA and transitioned to Ops. He is passionate about DevOps philosophy and advancements in cloud native infrastructure, and he brings years of experience in change configuration and container orchestration. In his spare time, Joaquin enjoys conversing in different languages, having studied 12, including French, Spanish, Japanese, and Korean.