The field of quantum computing today resembles the state of machine learning a few decades ago – in many ways. Near-term quantum algorithms for optimization, computational chemistry, and other applications are based on the very same principles that are used to train a neural network. In machine learning, there was no theoretical proof that a neural network could successfully recommend a good book to read. Similarly, little is known about the computational power 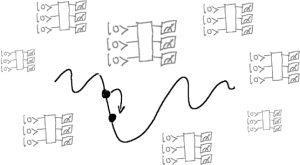 of variational quantum algorithms that iteratively adjust circuit parameters to arrive at a solution — much like a neural network. The field of quantum computing can learn a lot from the insights gained in the machine learning space over the past decades.

Last year, AWS began working closely with the PennyLane team, and in December, Amazon Braket launched support for PennyLane. In February, AWS announced that it joined the PennyLane steering council to support the goal of building better tools for developers and researchers by combining ideas from ML and quantum computing. Working with AWS partner Xanadu, we want to grow PennyLane as an open, community-driven project. I hope we get many contributors from quantum, ML, and other fields to join the project and build with us.

Learn more about PennyLane and differentiable quantum programming on Amazon Braket in our PennyLane post on the AWS Open Source Blog.