Round 2 post-quantum TLS is now supported in AWS KMS

Why post-quantum TLS is important

We’re offering this feature now instead of waiting for standardization efforts to be complete so you have a way to measure the potential performance impact to your applications. Offering this feature now also gives you the protection afforded by the proposed post-quantum schemes today. While we believe that the use of this feature raises the already high security bar for connecting to AWS KMS endpoints, these new cipher suites will impact bandwidth utilization and latency. However, using these new algorithms could also create connection failures for intermediate systems that proxy TLS connections. We’d like to get feedback from you on the effectiveness of our implementation or any issues found so we can improve it over time.

Some background on post-quantum TLS

Today, all requests to AWS KMS use TLS with key exchange algorithms that provide perfect forward secrecy and use one of the following classical schemes:

The possibility of large-scale quantum computing has spurred the development of new quantum-resistant cryptographic algorithms. NIST has started the process of standardizing post-quantum key encapsulation mechanisms (KEMs). A KEM is a type of key exchange that’s used to establish a shared symmetric key. AWS has chosen three NIST KEM submissions to adopt in our post-quantum efforts:

Hybrid mode ensures that the negotiated key is as strong as the weakest key agreement scheme. If one of the schemes is broken, the communications remain confidential. The Internet Engineering Task Force (IETF) Hybrid Post-Quantum Key Encapsulation Methods for Transport Layer Security 1.2 draft describes how to combine post-quantum KEMs with ECDHE to create new cipher suites for TLS 1.2.

The effect of hybrid post-quantum TLS on performance

Post-quantum cipher suites have a different performance profile and bandwidth usage from traditional cipher suites. AWS has measured bandwidth and latency across 2,000 TLS handshakes between an Amazon Elastic Compute Cloud (Amazon EC2) C5n.4xlarge client and the public AWS KMS endpoint, which were both in the us-west-2 Region. Your own performance characteristics might differ, and will depend on your environment, including your:

The following graphs and table show latency measurements performed by AWS for all newly supported Round 2 post-quantum algorithms, in addition to the classical ECDHE key exchange algorithm currently used by most customers. 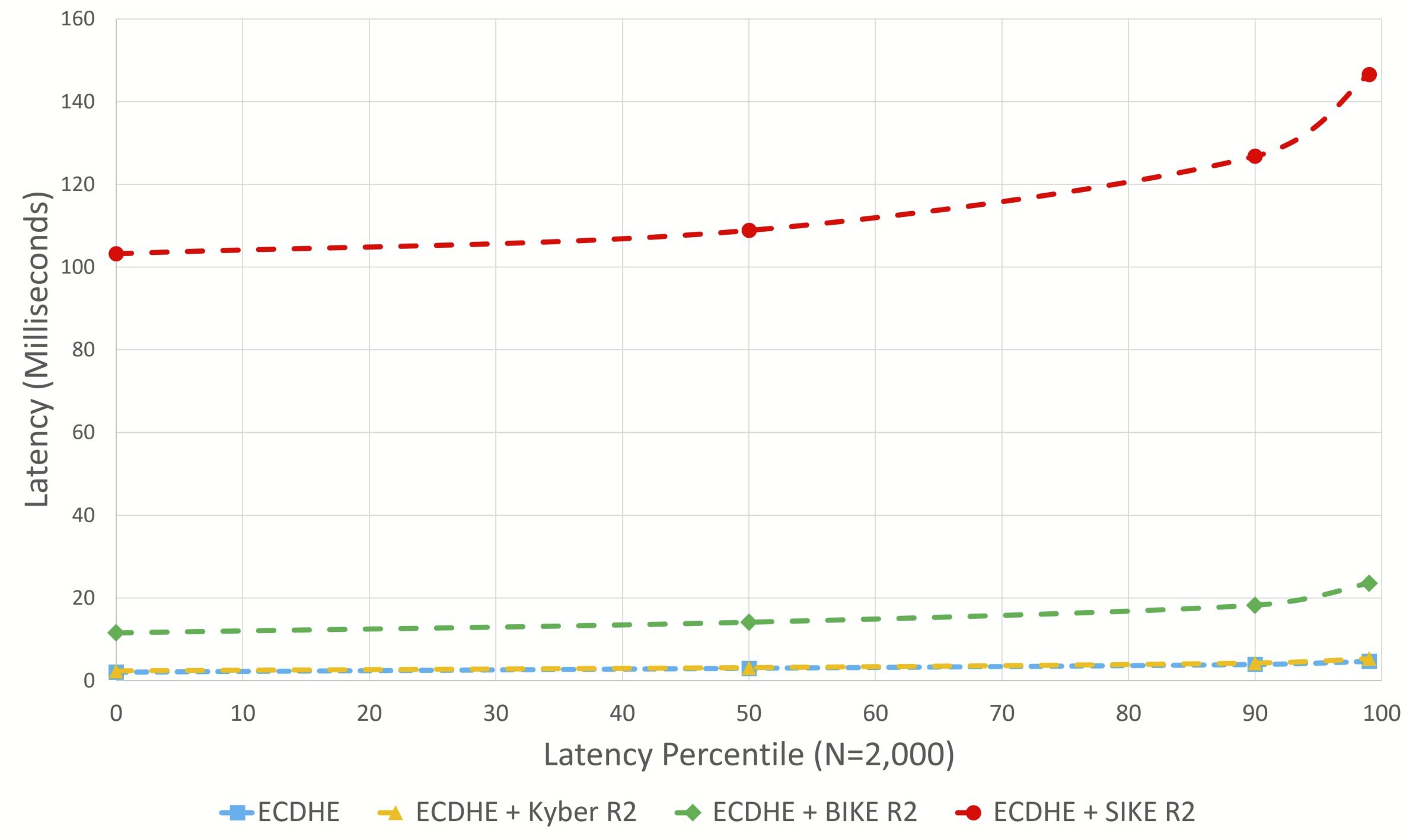 Figure 3 shows the latency differences between ECDHE with Kyber, and ECDHE alone. The addition of Kyber adds approximately 0.3 milliseconds of overhead. 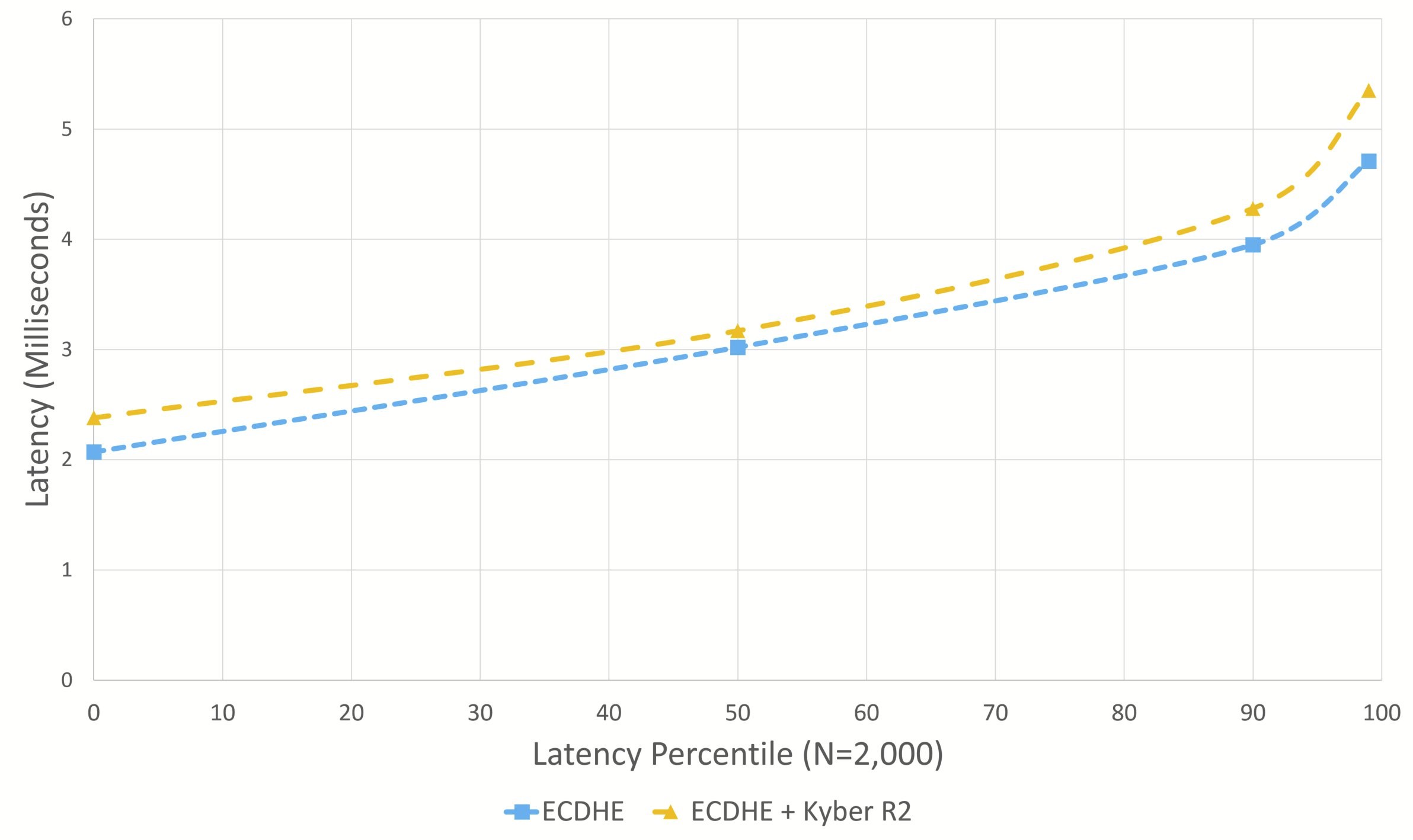 The following table shows the total amount of data (in bytes) needed to complete the TLS handshake for each cipher suite, the average latency, and latency at varying percentiles. All measurements were gathered from 2,000 TLS handshakes. The time was measured on the client from the start of the handshake until the handshake was completed, and includes all network transfer time. All connections used RSA authentication with a 2048-bit key, and ECDHE used the secp256r1 curve. All hybrid post-quantum tests used the NIST Round 2 versions. The Kyber test used the Kyber-512 parameter, the BIKE test used the BIKE-1 Level 1 parameter, and the SIKE test used the SIKEp434 parameter.

How to use hybrid post-quantum cipher suites

To use the post-quantum cipher suites with AWS KMS, you need the preview release of the AWS Common Runtime (CRT) HTTP client for the AWS SDK for Java 2.x. Also, you will need to configure the AWS CRT HTTP client to use the s2n post-quantum hybrid cipher suites. Post-quantum TLS for AWS KMS is available in all AWS Regions except for AWS GovCloud (US-East), AWS GovCloud (US-West), AWS China (Beijing) Region operated by Beijing Sinnet Technology Co. Ltd (“Sinnet”), and AWS China (Ningxia) Region operated by Ningxia Western Cloud Data Technology Co. Ltd. (“NWCD”). Since NIST has not yet standardized post-quantum cryptography, connections that require Federal Information Processing Standards (FIPS) compliance cannot use the hybrid key exchange. For example, kms.<region>.amazonaws.com supports the use of post-quantum cipher suites, while kms-fips.<region>.amazonaws.com does not.

Now, all connections made to AWS KMS in supported Regions will use the new hybrid post-quantum cipher suites! To see a complete example of everything set up, check out the example application here.

Here are some ideas about how to use this post-quantum-enabled client:

If you’d like to learn more about post-quantum cryptography check out: