We’re relentlessly innovating on your behalf at AWS, especially when it comes to security. Last November, we launched Amazon GuardDuty, a continuous security monitoring and threat detection service that incorporates threat intelligence, anomaly detection, and machine learning to help protect your AWS resources, including your AWS accounts. Many large customers, including General Electric, Autodesk, and MapBox, discovered these benefits and have quickly adopted the service for its ease of use and improved threat detection. In this post, I want to show you how easy it is for everyone to get started—large and small—and discuss our rapid iteration on the service.

After more than seven years at AWS, I still find myself staying up at night obsessing about unnecessary complexity. Sounds fun, right? Well, I don’t have to tell you that there’s a lot of unnecessary complexity and undifferentiated heavy lifting in security. Most security tooling requires significant care and feeding by humans. It’s often difficult to configure and manage, it’s hard to know if it’s working properly, and it’s costly to procure and run. As a result, it’s not accessible to all customers, and for those that do get their hands on it, they spend a lot of highly-skilled resources trying to keep it operating at its potential.

Even for the most skilled security teams, it can be a struggle to ensure that all resources are covered, especially in the age of virtualization, where new accounts, new resources, and new users can come and go across your organization at a rapid pace. Furthermore, attackers have come up with ingenious ways of giving you the impression your security solution is working when, in fact, it has been completely disabled.

I’ve spent a lot of time obsessing about these problems. How can we use the Cloud to not just innovate in security, but also make it easier, more affordable, and more accessible to all? Our ultimate goal is to help you better protect your AWS resources, while also freeing you up to focus on the next big project.

With GuardDuty, we really turned the screws on unnecessary complexity, distilling continuous security monitoring and threat detection down to a binary decision—it’s either on or off. That’s it. There’s no software, virtual appliances, or agents to deploy, no data sources to enable, and no complex permissions to create. You don’t have to write custom rules or become an expert at machine learning. All we ask of you is to simply turn the service on with a single-click or API call.

GuardDuty operates completely on our infrastructure, so there’s no risk of disrupting your workloads. By providing a hard hypervisor boundary between the code running in your AWS accounts and the code running in GuardDuty, we can help ensure full coverage while making it harder for a misconfiguration or an ingenious attacker to change that. When we detect something interesting, we generate a security finding and deliver it to you through the GuardDuty console and AWS CloudWatch Events. This makes it possible to simply view findings in GuardDuty or push them to an existing SIEM or workflow system. We’ve already seen customers take it a step further using AWS Lambda to automate actions such as changing security groups, isolating instances, or rotating credentials.

Now… are you ready to get started? It’s this simple: 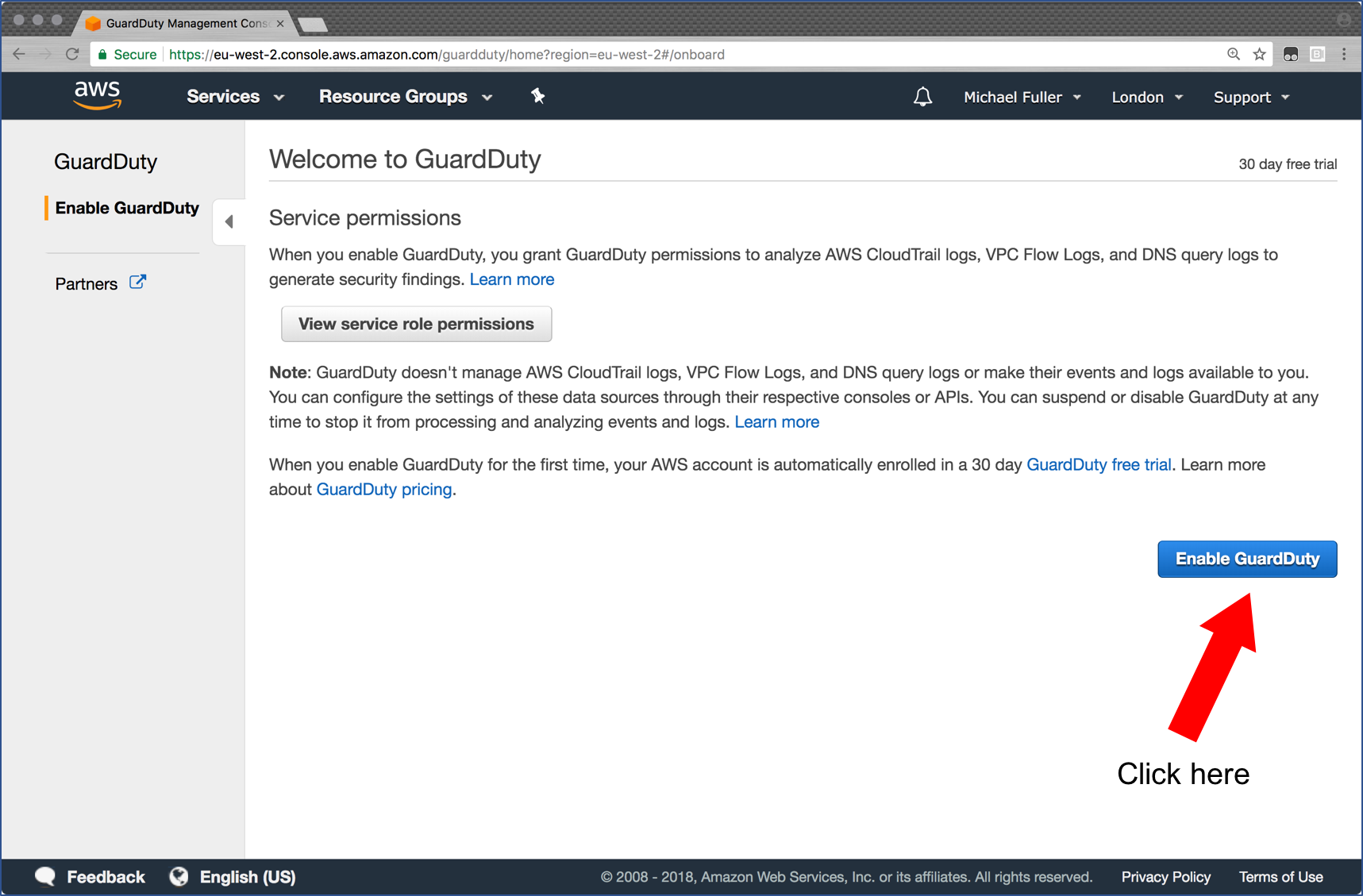 So, you’ve got it enabled, now what can GuardDuty detect?

As soon as you enable the service, it immediately starts consuming multiple metadata streams at scale, including AWS CloudTrail, VPC Flow Logs, and DNS logs. It compares what it finds to fully managed threat intelligence feeds containing the latest malicious IPs and domains. In parallel, GuardDuty profiles all activity in your account, which allows it to learn the behavior of your resources so it can identify highly suspicious activity that suggests a threat.

The threat-intelligence-based detections can identify activity such as an EC2 instance being probed or brute-forced by an attacker. If an instance is compromised, it can detect attempts at lateral movement, communication with a known malware or command-and-control server, crypto-currency mining, or an attempt to exfiltrate data through DNS.

Where it gets more interesting is the ability to detect AWS account-focused threats. For example, if an attacker gets a hold of your AWS account credentials—say, one of your developers exposes credentials on GitHub—GuardDuty will identify unusual account behavior. For example, an unusual instance type being deployed in a region that has never been used, suspicious attempts to inventory your resources by calling unusual patterns of list APIs or describe APIs, or an effort to obscure user activity by disabling CloudTrail logging.

Our obsession with removing complexity meant making these detections fully-managed. We take on all the heavy lifting of building, maintaining, measuring, and improving the detections so that you can focus on what to do when an event does occur.

When we launched at the end of November, we had thirty-four distinct detections in GuardDuty, but we weren’t stopping there. Many of these detections are already on their second or third continuous improvement iteration. In less than three months, we’ve also added twelve more, including nine CloudTrail-based anomaly detections that identify highly suspicious activity in your accounts. These new detections intelligently catch changes to, or reconnaissance of, network, resource, user permissions, and anomalous activity in EC2, CloudTrail, and AWS console log-ins. These are detections we’ve built based on what we’ve learned from observed attack patterns across the scale of AWS.

The intelligence in these detections is built around the identification of highly sensitive AWS API calls that are invoked under one or more highly suspicious circumstances. The combination of “highly sensitive” and “highly suspicious” is important. Highly sensitive APIs are those that either change the security posture of an account by adding or elevating users, user policies, roles, or account-key IDs (AKIDs). Highly suspicious circumstances are determined from underlying models profiled at the API level by GuardDuty. The result is the ability to catch real threats, while decreasing false positives, limiting false negatives, and reducing alert-noise.

As we like to say in Amazon, it’s still day one. I’m excited about what we’ve built with GuardDuty, but we’re not going to stop improving, even if you’re already happy with what we’ve built. Check out the list of new detections below and all of the GuardDuty detections in our online documentation. Keep the feedback coming as it’s what powers us at AWS.

Now, I have to stop writing because my wife tells me I have some unnecessary complexity to remove from our closet.