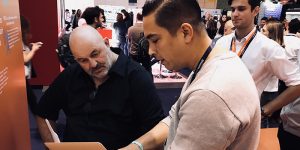 Forget talking microwaves or smart refrigerators. To kick off his recent keynote speech on voice at Lisbon’s Web Summit technology conference, Dr. Werner Vogels began with a story about rice farmers. Vogels, the CTO of Amazon.com, told an auditorium full of founders and technologists how the International Rice Research Institute (IRRI) had once built a computer program for farmers in Indonesia and the Philippines to help them better predict their fertilizer needs. However, because few of the farmers owned computers or smartphones, they weren’t able to access this helpful tool. It wasn’t until the IRRI built a voice interface to their tool that it immediately took off.

“We’ve always had this sort of illusion that countries are all experiencing digital systems through smartphones”—but that’s not really the case, Vogels later told AWS Startups. The truth is, “If you want to unlock the world to digital systems, you have to use voice.”

Vogels also noted that enterprise companies were adopting voice technology faster than startups—especially those that were customer-facing, like banks and transportation systems—and that founders really needed to start thinking about getting on board with voice, if they hadn’t already.

“Every startup should be thinking about, ‘What should my voice interface be?’ Because this [development] is not a fad,” he said. “It’s going to become one of the major interfaces, and if you want to unlock very large groups of potential customers, you need to think about how to voice-enable your applications—or maybe even use it as the primary interface.”

To hear more from Vogels, including his opinions on deep learning, listen on below.

Amazon.com CTO Werner Vogels wants to talk to you by AWS Startup Stories