Didimo Is Rethinking How We Interact in the Digital World

“I think I’ve always been a maker or a creator,” says Veronica Orvalho, the founder of Didimo, a cutting-edge technology company that allows people to transform images of themselves into lifelike 3D avatars. “Since I was very little, I always liked creating new things.”

For years, Orvalho worked in academia, studying character animation. While she appreciated the freedom that came with research and teaching, she found the academia-to-industry pipeline challenging, particularly being based in Europe. “It would take quite a long time to get things from idea to approved for implementation,” Orvalho says. Many promising projects simply remained in the drawer.

With Didimo, Orvalho made the leap into the startup world. “Amazon was actually how we got started,” she says. 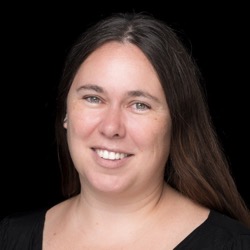 Didimo, which means “twin” in Greek, has built a platform for creating realistic 3D digital versions of people, based on simple photos or scans. That capability has potential applications in a host of industries, from AR/VR and video games to retail, fashion, and communications—really anywhere people want to have authentic, engaging, immersive experiences.

“The whole goal is to be able to give someone the possibility of having their representation or an extension of themselves in the virtual world,” Orvalho says.

Early on, Orvalho attended the Game Developers Conference in San Francisco in March 2016 and set up a meeting with the team from Amazon’s customizable game engine, Lumberyard.

“I flew to GDC specifically to meet the Amazon team, and I had a brilliant meeting,” Orvalho says. It was the end of the day and everyone was tired, but the Lumberyard team was impressed and asked Orvalho for a plugin. That validation was a huge boost for Orvalho and encouraged her to keep going. “It gave me the courage and the strength to say, ‘OK, I’ll make the jump. I’ll move from academia and give it a chance,’” Orvalho says.

The relationship with Amazon only deepened from there. Shortly after GDC, Orvalho applied to the Techstars accelerator program, an AWS Activate partner, which provided her team with credits and the support to easily and quickly get started. Leveraging the help from the AWS Startups team, the company was able to set up and test Didimo’s engine. “Without that, we wouldn’t have had the chance to really properly create the engine in the cloud,” Orvalho says.

Then, the following year, the Lumberyard team invited Didimo to be part of its booth at GDC—an opportunity that led to Orvalho meeting the team from Sony and landing Didimo’s first commercial project. “That was mind-blowing,” Orvalho says.

“I can’t thank AWS enough for everything we have done together so far,” Orvalho says. “And that was just the beginning. Since then, we’ve continued to have great support from AWS, whether it’s with reviewing new architecture or connecting us with new clients and investors.”

Didimo has grown a lot since that first Amazon meeting at GDC, boasting 30 employees spread across hubs in Porto, London, and Vancouver. The startup is well funded, too, having recently closed a $1 million round, on top of the more than $8 million it raised at the end of 2019.

“By working closely with the AWS Startups team, I know that if there’s something we’re missing, or if we need to scale in a specific area, then there’s always support,” Orvahlo says. “They just get us. They proactively reach out to say, ‘Hey, Veronica, we have these tools and resources that we think could help Didimo.’ It’s great to know they’re always there to assist.”

Next up for Didimo? The team is planning the launch of new tools and capabilities in early February. “We already create a life-like digital double from a simple photo in about 90 seconds. Our next round of advancements makes that even more accessible for companies to embed into their applications and platforms at run-time. We’re about to see a great breakthrough in using personal digital doubles in all sorts of applications.”