In 2018, AWS launched its Hackday program, offering teams from around ASEAN the opportunity and resources to build projects and compete for prizes, the top of which was a trip to Las Vegas for the annual re:Invent conference. Over 1,000 developers from countries including Singapore, Vietnam, Malaysia, Indonesia, the Philippines, and Thailand formed teams to develop new technologies during a one day hackathon. The winners of those days then squared off in Jakarta, with the team from Thailand ultimately winning the top prize and the trip to Las Vegas.

Hot off last year’s success, AWS launched the second iteration of the hackathon, this time with a focus on solving critical challenges for each team’s community in four sectors: HealthTech, AgriTech, FinTech, and Smart City. This time around, however, the competition would be available online, giving the opportunity for anyone throughout ASEAN to participate.

The response was immense, with over 1,500 participants signing up to build and compete. Similar to last year, top teams were chosen to enter the final round, which was held at the AWS Singapore Summit in April and tasked each team to build a “Computer Vision for Good” project under a 9-hour deadline. Leveraging AWS, Intel’s Movidius Neural Compute Stick and OpenVino ToolKit, the teams worked tirelessly under a tight time window to present to a panel of experts once complete.

Learn about each team below, the first being the selected champion from Malaysia, Team Astro. 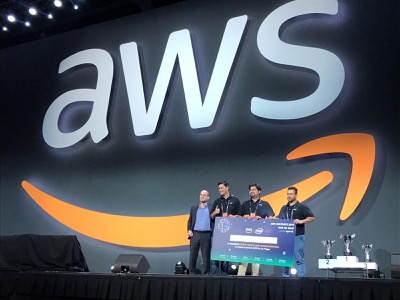 These teammates all met at the Malaysian broadcasting company after which the team was named. Satyam, Varun, and Manas—who all work as Solution Architects at Astro—won their regional competition with ParkSmartly, which made it easier to see real-time information on parking via IoT connected devices positioned in lots.

The hack that won them the trip to Las Vegas and re:Invent utilized computer vision to detect specific objects and send automatic alerts. While their hack was built to be customizable, the team’s initial object application was for guns, in an effort to keep certain areas more safe and enable security teams to be more efficient. It’s tough to continually scan video monitors for a weapon, so why not have a computer do the heavy lifting?

Back for a second time, team Sunday Morning was the reigning champs from last year’s Hackday competition. This year, the Thai team decided to focus on fitness, developing an application that records video of your workout and alerts you when your form is either good or bad. While the team didn’t end up achieving a back-to-back victory, Phuwit Vititayanon, Autsakom Tanyianniti, Padungkiat Tamasee, and Tunchanok Ngamsaowaros had a strong showing and came in second place.

Representing Vietnam, this team of four is on a mission to assist in alleviating stress in the workplace by helping employees start each day right: with a smile. Nghi Duong, Huy Nguyen, Quan Tram, and Quoc Phan built a check-in system for companies that prompts each employee to smile as they enter the office, utilizing computer vision to identify and analyze both faces and emotions.

Detecting autism in young children can be extremely difficult. The typical symptoms are hard for parents to identify at home, and bringing your child to a doctor can be somewhat terrifying if you’re not sure. Team SymbIoT—which comprises Reinier Veral, James-Andrew Sarmiento, Erwin Ong, and Marek Ganko, all employees at Nokia— worked on a hack built to help in just this scenario. Leveraging computer vision, the company’s technology is designed to detect signs of autism, such as rapid movement, facial expressions, and eye movements, to help take the guesswork out of the process for parents.

Having initially met in university in Indonesia, Team Patrons ended up also working together at GDP Labs, a subsidiary of GDP Ventures that helps portfolio companies on high-impact projects. As a seasoned team, Fakhri, Stella, and Johannes set out to build a computerized eye to assist in protecting visually impaired people, who can often be targets of crime. The company’s tech, dubbed EYVE, was built to help the wearer avoid obstacles, detect crimes and send alerts, as well as capture images and detect the faces of perpetrators.

Although this team has known each other for some time through their church, this competition was the first time they’ve come together to work on a tech project. Thung Han, Timothy Seah, and Edmond Chen won their regional contest by building a tool for doctors to transcribe and annotate notes during endoscopies (a procedure that necessitates the use of both hands). Looking to innovate within the hospital setting again, Team Samaritan set out to use ML to analyze fetus body scans and identify abnormalities earlier and more quickly.