How Backbase Leveraged EC2 Hibernation to Reduce Compute Spending by 30% 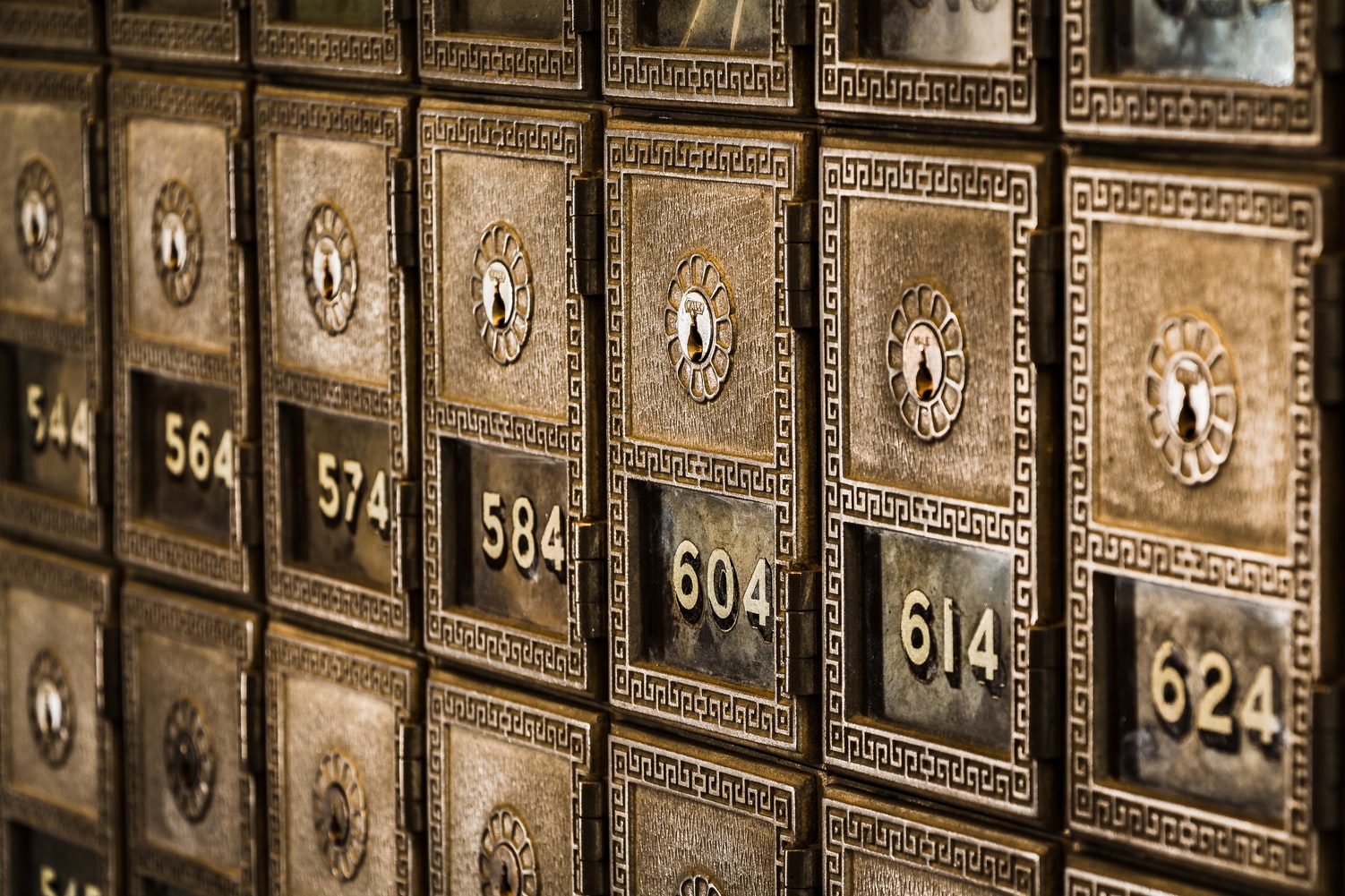 Backbase is a leader in digital first, omni-channel banking platform and creator of the Backbase Digital-First Banking Platform, a state-of-the-art digital banking software solution that unifies data and functionality from traditional core systems and new fintech players into a seamless, digital customer experience. Backbase gives financials the speed and flexibility to create and manage seamless customer experiences across any device and deliver measurable business results. Backbase’s digital banking platform is based on a modern microservice architecture with the option to run it on-premise, on a private or public cloud or as-a-service.

The Backbase platform includes five layers which are full-blown products in their own right. These are experience manager, digital banking, identity and entitlement, onboarding, origination and finally cloud deployment.

As you can guess from the above description of our platform, we use several technologies and tools to get our job done. Also, when you factor in the challenge of developing and testing  microservices (we have close to 100) for different developer profiles (backend, frontend, and mobile) and supported platforms, things tend to be complicated. In order to bridge this gap, Backbase uses a home-grown automation solution to deploy all or part of the platform on AWS for development and testing purposes taking away the complexity. The application is heavily used by our developers and QAs for their day-to-day workflow and on any regular working day, we have more than 500 EC2 instances running in AWS to serve the needs. The main reason we built this solution is to address the following concerns:

These are just a few of the major pain points that triggered our initiative to build an internal automation to address them. We make extensive use of AWS cloud and it was the first choice for developers of this internal tool following the approach described in the diagram below. 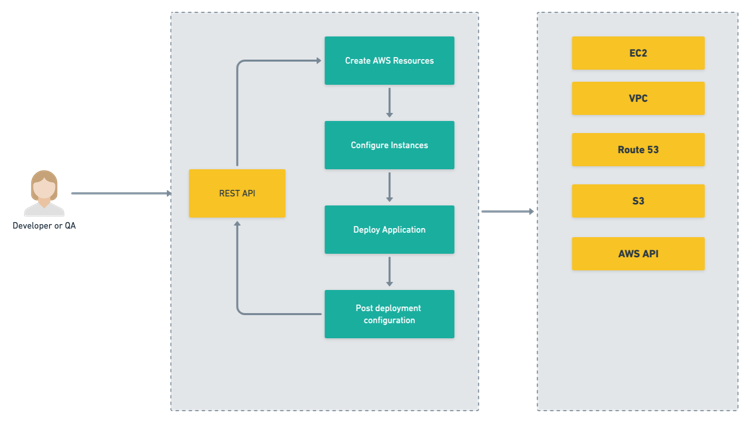 The tools is used by QAs as follows:

1. A developer/QA uses a web interface to provide information about which products/capabilities they need, what database to use (MySQL, MSSQL, or Oracle), what app server among the available configurations. In addition, the tool also has a REST API for the purpose of invoking it from pipelines.

2. The service will then use the information provided to:

○      Run post-deployment configurations once the services are up and running

3. Manage the lifecycle of the environments → create, stop, re-start, delete

4. Reconfigure existing environments by passing additional configuration parameters. For example, updating one of the services in the created environment to a new version.

As the company continues to grow and more people are working on the product, so does the need for more AWS resources to create, which in turn increased our cost significantly. Initially, when a developer creates an environment, it used to run for 72 hours before it was claimed by the tool which means it will be running during weekends or off business hours even when it was not used.

Our initial approach to address this problem was to incorporate the following features in the tool:

●      We included a custom script in the AMI images we use to create all of our EC2 instances. The script’s main purpose was to track the services we deployed on the EC2 instance and report back to the automation tool if no activity is detected for a period of 30mins.

●      When the automation tool receives an “idle event” from the script, we use AWS SDKs to trigger a shutdown of the instance so that we can save compute cost. We also keep track of the list of all EC2 instances that make up an environment. The average environment we create with the tool has at least a minimum of 4-5 EC2 instances. We made sure that all EC2 instances in an environment are reported as idle before we shut them down to avoid an error case where a service to be shut down because of inactivity while other services which depend on it are still actively in use.

●      A user is able to bring an environment back up through a web interface provided by the tool.

There were a handful of challenges we were facing with our approach namely:

When we heard about native  EC2 Hibernation feature we were very excited to give it a try and see if it can help us reduce our bill and also improve developer experience. First we did a quick proof-of-concept to validate the feature if it fits for our case and found out that it did solve most of our problems but we had a huge challenge to deal with. You see, most of our AMIs are based on CentOS and we had to recreate them to take advantage of native hibernation. Next we followed our first approach and did another proof-of-concept to validate our ansible application configuration scripts if they work with Amazon Linux distribution and found out that there were no issues there. After that we used our already existing automated process of creating AMIs using Packer to re-create all of our AMIs based on Amazon Linux. Later on we refactored our tool to hibernate instances instead of shutting them down. Finally we also tuned up our idle tracking script based on the changes. So in summary the steps we followed were:

Results
●      Cost management: we were able to reduce our monthly cost by 30% by utilizing the EC2 Hibernation feature. Instances are now immediately hibernated after two hours of inactivity.

●      Out of the box provided by AWS: this means that we can throw away some of the custom implementations we have. Less code = fewer bugs = less stuff to maintain and support!

●      Speed: we noticed a considerable difference in speed of bringing up hibernated vs stopped instances. It used to take us 5-10 mins to bring up stopped environments in our custom implementation while with the built-in hibernation our services are back up in 30 seconds.

●      Better developer experience: developers are now happy that their test environments are there whenever they need them with retained state, they feel confident they are not wasting resources when they are not in use. In addition, we saw a significant reduction in errors between restarting and resuming instances because in hibernation we don’t need to do all sorts of service start-up logic since the memory of the instance is retained during the process.

●      Works as advertised: we were extremely surprised that the hibernation feature “just works.”

Hibernation has helped us to optimize our EC2 usage, leading to lower compute costs since we integrated the feature in our internal tooling. It also brought a direct positive impact on developer experience as it now takes less than a minute to bring up a group of instances which were hibernated while in our initial solution a developer had to wait for several minutes before they could start interacting with it. In addition, the tooling team was able to iterate on the solution faster as now there is no need for us to implement and maintain our previous logic for shutting down and bringing back an instance.

We are the creators of the Backbase Digital-First Banking Platform, a state-of-the-art digital banking software solution that unifies data and functionality from traditional core systems and new fintech players into a seamless, digital customer experience. We give financials the speed and flexibility to create and manage seamless customer experiences across any device, and deliver measurable business results. We believe that superior digital experiences are essential to stay relevant, and our software enables financials to rapidly grow their digital business.