How Startups Can Develop an Influencer Marketing Strategy

If you think influencer marketing is just about getting the Williams sisters to use your product, think again.

Companies in just about every sector—from sports and journalism to healthcare and finance—are putting influencers in their marketing toolbox, and that includes tech startups. Early-stage companies need the most agile, low-cost ways of reaching new customers, and social media influencers can be a part of the answer. That said, the influencer landscape is crowded and often confusing. For a lot of startups, it’s hard to find the right partners, come up with a cogent strategy, or figure out what’s paying off and what’s wasting money. How can founders take the influencer plunge?

First off: what exactly is an influencer? 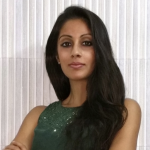 “It’s the idea that this person is able to sway the opinion of those around us,” says Ishveen Anand, CEO and co-founder of OpenSponsorship, a platform that connects brands with athletes for marketing campaigns. In that sense, influencers are nothing new. Word of mouth is probably the world’s oldest form of marketing, and often something we barely notice. (“I love what you’re wearing. Where’d you get it?”)

Today’s influencer marketing space is like word of mouth on steroids—scalable, testable, and customizable. The old world of sponsorships and brand ambassadors has given way to companies of all sizes working with personalities on every social network, with audiences from the niche to the international.

Campaigns vary from a one-off TikTok video to a long-term Twitter campaign, with the goal of audience engagement, reactions, and, ideally, sales. Of course, there’s a price for every service. In the NBA market, Anand says, the spectrum ranges from $1,000 for a post by a bench player to upwards of $20,000 for each post from superstars like Russell Westbrook, who boasts over 15.3 million Instagram followers. 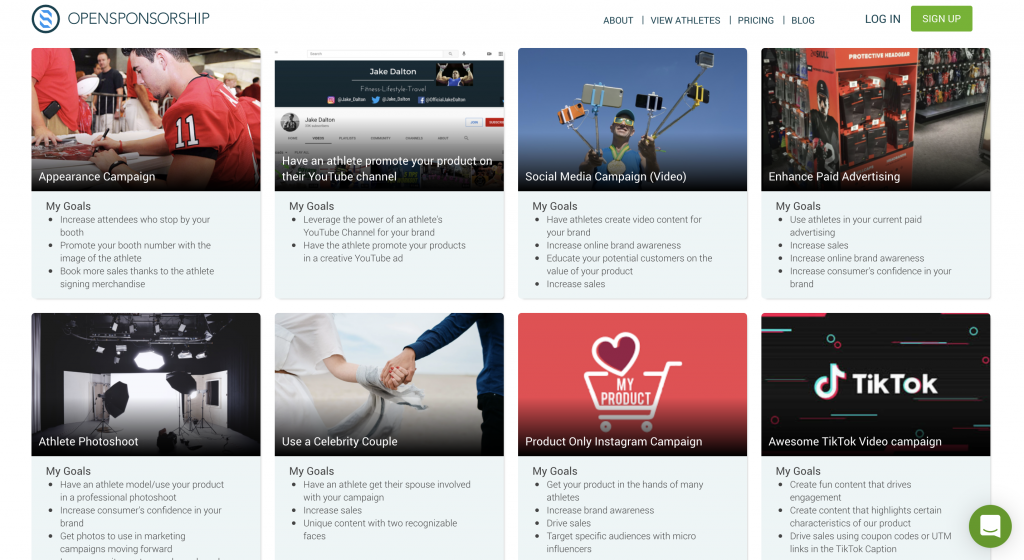 But while big names get the attention, chasing celebrities isn’t necessarily going to be effective (or affordable) for most startups. More often than not, your audience won’t care what someone thinks just because they’re famous. A large following can help, but successful campaigns always have a key ingredient: authenticity.

The goal is finding people with an ability to influence decision-making on the part of your target audience, meaning someone that your customers find interesting and believable and whose opinion they respect. Sometimes, that may mean a less-than-direct connection to your product or space. Trying to get more users on your dating app? Think Instagram yoga instructor, not ex-The Bachelor contestant.

The other key ingredient, says Anand, is the content itself. “You could have the best expert in the world…but if the content that they produce for your brand is not engaging, not stimulating, not entertaining. then it’s kind of pointless,” she says.

Your influencer’s fans aren’t only following them to hear about their sponsors, so don’t hang on every word of every post. And listen to them, too; if you’re working with someone that’s a good fit for your brand, they may understand your audience in ways that even you don’t. Giving up some creative control can lead to a more authentic representation of your brand and drive more engagement.

If all this sounds pretty intangible, it’s fair to ask how you know whether someone is authentic or is a good fit for your brand. Can founders assess the options in front of them with data, and not just hype?

Predicting the success of a campaign is the “holy grail” of influencer marketing, says Anand. While it hasn’t yet been found, there are some good places to start.

If your core target audience is young men in New York City, one approach might be a database of athletes, on a platform like Anand’s OpenSponsorship. Maybe you want someone who plays in New York—or maybe you realize that a New York team hasn’t won a championship in almost a decade, and the city’s full of transplants anyway. You might filter in athletes who have more than 50% of their followers living in New York, more than 50% male, and more than 25% between ages 18 and 24. 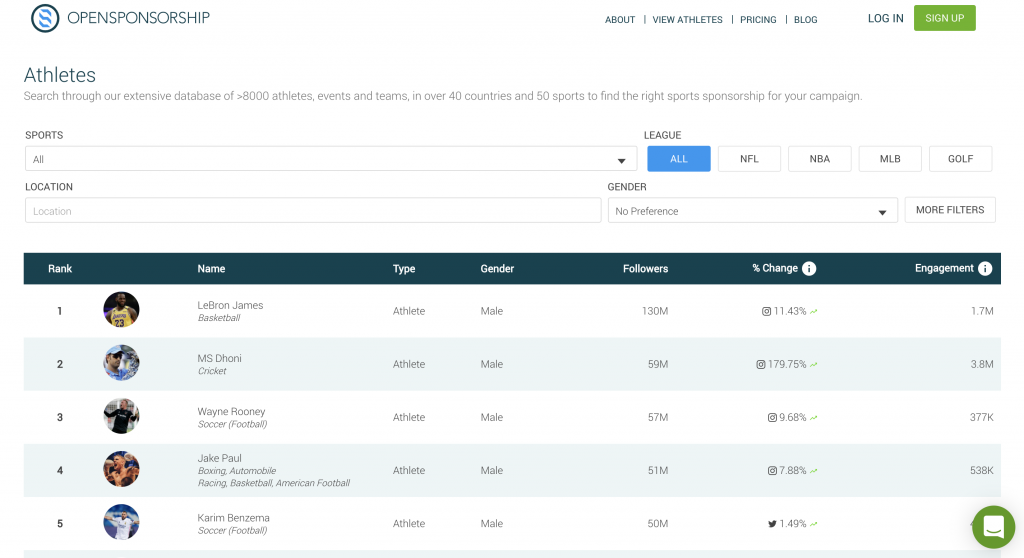 Just like with a targeted Facebook ad, that kind of data will give a good indication of the likely fit with your audience. But demographics can only get you so far. For one, it’s still very general, telling you little about the specific content they’re posting. What’s more, social media networks are constantly tweaking the relevant algorithms. It can be hard to guarantee who’s actually going to end up seeing the content you’re paying for, or how many people.

To make sure you’re getting the most out of your campaign, think about repurposing the influencer content beyond a single post or feed. You might spend $500 on an Instagram video that goes out to a certain account’s followers and gets some temporary engagement. But if you can reuse that same video on your own website or in your ads on other platforms, that $500 investment is stretched a lot further.

“Try not to focus too much just on what that one post can deliver,” Anand says. “It’s really tough to get a positive ROI on one social media post.”

If you’ve decided to dip your toe into the influencer waters, here are a few best practices.

First, the more prep you do, the better your return. Know very clearly who you are as a brand, and decide how you want to come off to your customers—fun and funky, or deep and thoughtful?

Second, start with what’s already working. The number of social networks to choose from can be overwhelming, and they’re each suited to different approaches and companies. If you already have longform YouTube content that’s finding a solid response with your customers, don’t start with a Snapchat campaign just because it seems sexier. Play to your existing strengths, and if you find success, you can layer on new campaigns on other media networks. 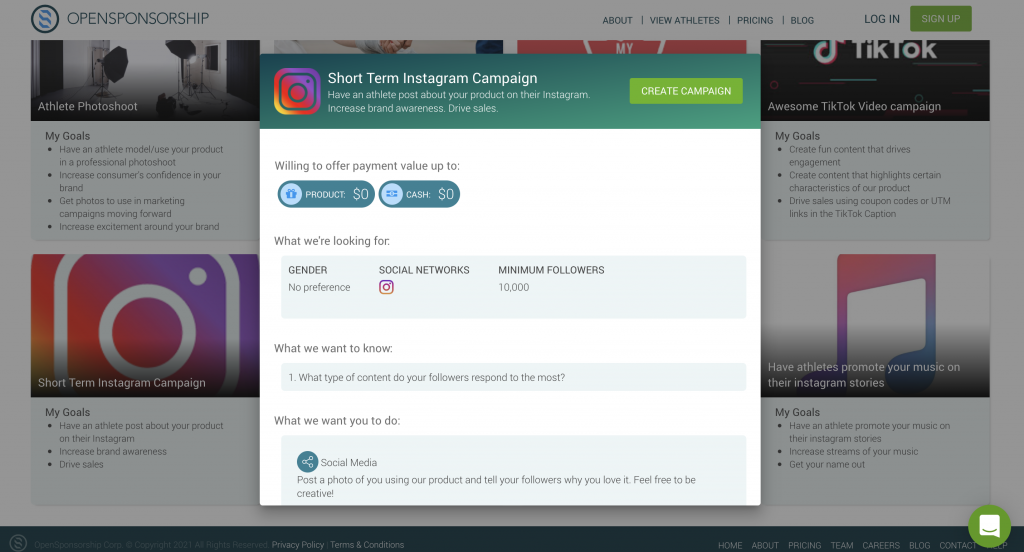 Third, set realistic expectations. Many companies feel like if they’re spending money on an influencer campaign, every post needs to route a certain number of customers to a specific promotion, and directly drive some number of sales.

“Influencer marketing, like all other marketing channels, needs defined objectives prior to the activation, which is why our platform outlines and guides brands on their objectives as they build their campaign. Some brands publish campaigns for awareness, some for product launches, others to push traffic to their website, and so on. Our platform defines your objectives early on, so we make sure you stay on track and figure the best path forward,” says Anand.

Finally: test, test, test. Approach posts like you would when A/B testing a web design or email campaign. Start by choosing inexpensive, one-off engagements over long-term deals, and see what works. It’ll help you stay lean, discover new tactics, and avoid pouring too much upfront into a relationship that falls flat.

You might try an Instagram story with a swipe-up to your e-commerce store, and then see how much engagement you can get out of an in-feed post and whether it actually leads to more sales. Experiment with different influencers, niches, networks and kinds of content. Whatever’s working, nudge your strategy in that direction over time.

The influencer and digital marketing space has become more diverse, accessible, and crowded. Especially for startups, having a proven platform like OpenSponsorship—experienced in completing over 5,000 deals, analyzing the options, and producing data-driven results—has become a must have versus a nice to have.