Upgrades Without Tears Part 1: An Introduction to Blue/Green Deployment on AWS

If you’ve ever been involved in a production system upgrade that went sideways, then you know that there are better things to be doing on a Saturday night, like going out and having a good time or staying in and writing a great new feature for your startup.

Blue/green deployment is a release technique designed to take the difficulty out of production system upgrades. AWS provides a great environment to manage such deployments in a cost-effective and low-risk way.

This blog post is part 1 of a two-part series that describes how to take advantage of blue/green deployment strategies by using AWS to minimize deployment risk and cost, and also speed up your deployment cycle.

Upgrading Live Systems is a Challenge

As a startup, fighting upgrade fires takes precious time, a resource you may not be able to spare. It’s a big distraction that steals time from the activities that create value for your startup, like building new features. In some situations, recovering from a failed upgrade may itself fail, in which case you have a real emergency on your hands that impacts users and tarnishes the public image you’re working hard to build.

Many of the limitations of traditional environments are absent in the cloud. You have the ability to quickly and affordably provision new servers, switch off (and stop paying for) existing servers, and recreate entire networking infrastructure through code and automation. These abilities are game-changers for startups when it comes to deploying software.

What is Blue/Green Deployment?

The following illustration shows the basic anatomy of a blue/green deployment architecture. We have the two environments, with the blue one currently live in production. Our goal is to transition users over to the green one in a gradual controlled fashion. 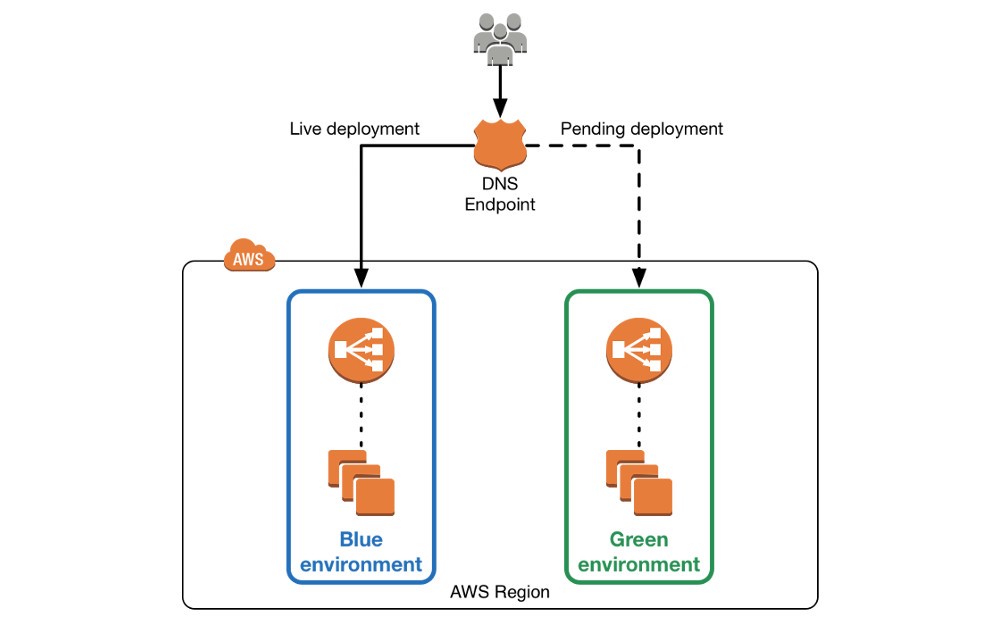 If you start switching a small proportion of traffic from blue to green and encounter serious issues, then you can quickly switch back to blue and restore service within minutes. This process is sometimes called canary analysis: you test that the new deployment works in a real-world scenario with a small set of your users.

The speed at which you can make these weighting changes at the DNS level depends on the time to live (TTL) of your Amazon Route 53 DNS records. The TTL determines how long users can cache DNS values before asking Amazon Route 53 for new ones. So you’ll see actual traffic transition gradually, as old cached values get updated with fresh values. Amazon Route 53 is designed to propagate DNS updates within 60 seconds.

You can easily take advantage of newer, more powerful, or cheaper servers by simply launching the newer server types in your green environment, validating them, and then cutting over.

You can also take advantage of Auto Scaling to optimize costs. You can allow the size of the fleet of servers in your green environment to grow gradually as you shift more traffic to it, while the size of the blue fleet will shrink as it handles less traffic.

Digging a Little Deeper into Blue/Green Deployment on AWS

AWS has tools and services that make it easy to stand up and manage these multi-tier environments. This helps startup developers focus on what’s truly important, such as developing a great product rather than managing infrastructure.

Start with AWS Elastic Beanstalk, a platform as a service (PaaS) that supports most popular development platforms and languages. If your application doesn’t require a very customized platform environment to operate, this is a great, easy to use service. It also offers zero downtime deployments. Use our easy step-by-step guide to get started.

If your application has a more complex multi-tier architecture, AWS OpsWorks allows you to model complex decoupled applications. It trades in some of the ease of use of Elastic Beanstalk for increased flexibility. A great feature that makes blue/green deployment easy is the ability to clone a stack and create a copy of your blue stack as a baseline for your green one. Learn how to get started using OpsWorks.

Regardless of whether application layers are clearly separated and running on different servers, or just logically delineated inside your code, your new deployment can contain changes in any of them. Your data persistence layer, however, may need some extra consideration:

In part two of this series, we’ll walk through the blue/green deployment process step by step, and we’ll discuss data synchronization strategies in greater detail.