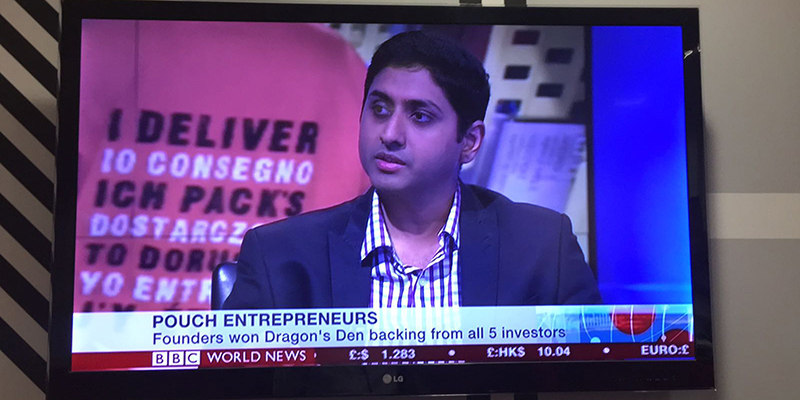 You know the story. Plucky band of adventurers make off with the dragon’s loot, only to suffer some tragic ending because they neglected to take seriously some key bit of information. Usually it falls along the lines of said-dragon treasure being cursed, or so heavy it sinks the boat, or originally belonged to a foul-tempered Orc king now out for blood. The point is, things end badly.

There was no way Vikram Simha was letting any of that happen.

Not that Orcs and boats were involved, but there was a real danger that London-based Pouch, where Vikram is CTO and a co-founder, could be sunk from the sheer traffic that was heading its way. In 2017, Pouch’s other co-founders Ben Corrigan and Jonny Plein had come off the UK startup pageant show Dragons’ Den with a clean-sweep. All five of the “dragon” judges deemed Pouch, which automatically surfaces the best deals and discounts to it UK users as they shop, worthy of investment.

The startup’s profile was about to go through the roof.

Fortunately, since the show was taped and the Pouch team knew the happy ending, they had time to prepare and scale their cloud infrastructure, which was used to handling 6,000 users, to handle what was going to be unleashed.

“Everyone else was pretty much enjoying themselves, drinking and watching the show on the day it aired, while I sat glued to our analytics dashboard,” Simha says. “We streamed the analytics live, and at the peak, we were getting 35,000 users every second. It was a ridiculously high number. But we never had downtime, and we never got a complaint.”

Simha’s only complaint today is that he could have enjoyed the party more.

The BBC tapped Simha for a segment following the Dragons’ Den victory, so the momentum from one show to the next continued. Today, Pouch’s traffic has settled into a less spiky pattern of about 25,000 visits every minute from a base of about 80,000 users.

Meanwhile, Simha’s concern leading up to the airing of Dragons’ Den was handling whatever wave of people came at Pouch’s infrastructure during the show, today, it’s about optimizing the infrastructure to keep costs in check. Leveraging serverless APIs in particular (Pouch had pretty significant API gateway usage expenses), they moved costs down to less than $45 a day to serve all 80,000 users.

Simha has found that being very deliberate about adding infrastructure—not over-provisioning—has put Pouch on a smooth, more predictable path when it comes to IT costs. “What I am finding as we build things out, leaning on things like serverless, is that our cost of infrastructure today at about 100,000 users is comparable to what it will be tomorrow if we acquire 1 million users. It all works for us.”

And without panicking over whether the Pouch service will be able to withstand another wave of new users, Simha has been able to think more deeply about how he and the Pouch technical team are developing their core product.

Maybe it was just handling the flood of new users after Dragons’ Den, but at some point, the Pouch team stopped talking to its users about what to build next. Without that feedback, Simha says, the team wasn’t always headed in the right direction. “We were building things based on assumptions, not data,” he says, “and that wasn’t working.”

Today, nothing gets built at Pouch unless user testing is a part of it, and it either adds value for the consumers looking for deals—does a better job matching their data on the backend with what they want—or, allows Pouch’s retail partners to offer better deals. “If we can’t measure the success or failure of new component doing either of those things, then we are not building it,” Simha says.

As for any more TV in the company’s future, Simha won’t rule it out. And while the Dragons’ Den appearance certainly jump-started Pouch’s success, you’d be wrong if you think it’s Simha’s favorite show.

“Breaking Bad is my No. 1,” he says laughing. “Screw all those startup shows.”