For many startups, the core of their business is based on removing friction and finding efficiencies, typically with software greasing the wheels. Uber and Lyft eliminated the need to call a taxi, tell them your location, and wait to pay at the end of a ride. Dropbox was one of the first to offer a simple cloud-storage service, eliminating the need to carry thumb drives to transport and access files. And although AWS isn’t a startup, its entire premise could be said to be based upon simplifying the user experience for developers.

This goal of removing friction is also central for Red Dot Payment (RDP), a Singaporean fintech startup that offers a platform for companies looking to accept digital payments, which is pretty much everyone these days. It’s not hard to see why, either. Making it easier for customers to pay you simply means more revenue coming in.

But, for any startup, it’s necessary to find a niche. It’s impossible to target the entire market, after all. RDP found its sweet spot in the e-commerce hospitality industry operating throughout Asia, along with other international online retailers operating globally. 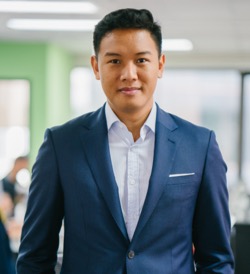 To help build a streamlined experience for its customers, RDP turned to AWS. As CTO Gian Carlo Val Ebao puts it, “One of the main benefits we’ve seen from building with AWS is the ability to architect compliant software that can stand up to the rigors audits demanded by regulators. If we were to run our own data centers, there would be a host of work to be done for each audit, such as providing disaster recovery zones and details on who has access. AWS simplifies that process.”

To stay as efficient as possible, the company stays on top of the latest developments in cloud services, with a great example being its implementation of AWS Lambda and serverless architecture. This strategy has not only given it cost savings in the form of one less developer needed but also more time to focus on diversifying its business to serve the wider payments industry, per Gian.

Similarly, RDP’s recently been experimenting with Amazon Sagemaker to build an in-house fraud detection platform that leverages machine learning. Having been founded in 2011, the company has a deep data lake. This then feeds into its algorithms to better inform its analysis of transaction data pushed through the system.

This drive for efficiency, both on behalf of its customers and with its infrastructure, has seemingly paid off. RDP currently boasts customers in over 22 markets, along with offices in Singapore, Thailand, Indonesia, and as of earlier this year, Australia. On its current path, it’s hard to imagine that further geographic expansion isn’t on the horizon for the fintech startup.