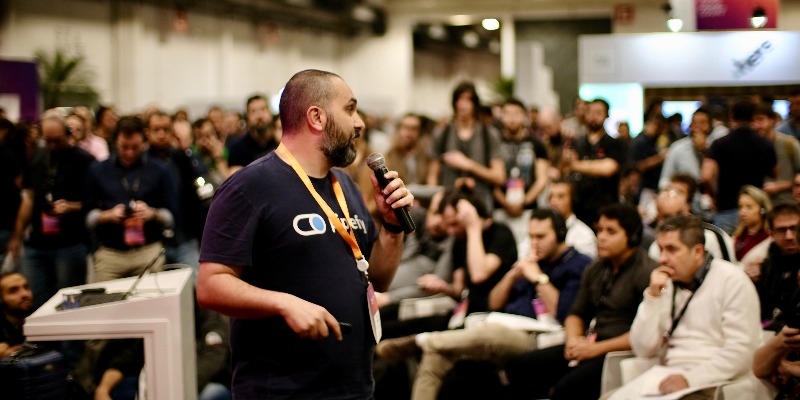 They came, they listened, and like all good developers, they grilled the speakers following their presentations at Startup Central here at the Sao Paulo AWS Summit.

By 9 a.m., more than 6,000 people had made their way into the Transamerica Expo Center to hear Amazon CTO Dr. Werner Vogels kick the day off and then fan out to find the sessions and speakers that spoke most to their cloud needs and questions.

For those who haven’t been to an AWS Summit, it’s all about learning, diving into, and taking away a deeper understanding of the latest trends across AWS, from machine learning to database migration, scaling, and security. Always security.

The notion behind Startup Central is that the entrepreneurs behind the some of the fastest-growing companies on the planet have unique needs and operate at a velocity that few larger companies can (or want to) match. Startup Central is designed so that entrepreneurs of every level of experience can tap in to the technical and business expertise available from AWS, and take their startup to the next level.

Startup Central in Sao Paulo featured 13 leading startup customers of AWS from the Brazil market, speaking about everything from “Cloud Food,” to Kubernetes on AWS and scaling while keeping a very close eye on costs. A sample of the companies on the startup stage included Pipefy, Nubank, OLX, Quinto Andar, and ifood, among others.

Over the past five years, the Brazilian startup ecosystem has been exploding, according to founders and investors in Brazil. As the largest market in Latin America, Brazil is a great place to found and grow a company before taking it to the rest of Latin America and the world. Venture capitalists have noticed. The growth in funding over the past few years from both outside VC funds coming to Brazil, and homegrown funds that have been established or grown the pot of money they have to invest, has been huge.

In its annual report, the Latin America Private Equity and Venture Capital Association found that VC funding in the region hit a record $1.98 billion, almost double the total VC funding in 2017. And 2017 funding was already four times the $500 million invested in 2016. Of that growing pot of money, more than half is going to Brazilian startups. As a result, the startup economy here is surging.

The Sao Paolo AWS Summit is almost in the books, but you can get a dose of Dr. Vogels from a recent AWS Summit here. If Brazil isn’t your backyard, there are free AWS Summits across the globe—and for startups, a  team of specialists are ready to help.

So, find the next Summit or AWS event near you here, and get your questions ready.